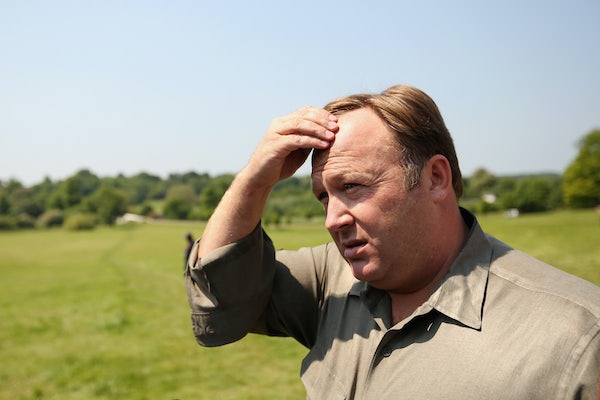 Alex Jones accused of destroying evidence in the Sandy Hook lawsuits against him.

The New York Times reports that Texas lawyers representing two families of Sandy Hook shooting victims have filed a motion “accusing the conspiracy theorist Alex Jones and his Infowars media business of intentionally destroying evidence relevant to the defamation cases against him.”

The 2012 Sandy Hook massacre in Newton, Connecticut was the most lethal school shooting in American history, with 20 children and six adults killed by gunman Adam Lanza. On his program Infowars, Jones has repeatedly maintained that the killing was a false flag operation. This has led to the harassment of families of the victims by Jones fans.

In recent weeks, Jones has become a social media pariah, losing platforms on Facebook, Apple, and Youtube. Last week, after being temporarily suspended from Twitter, Jones “said on his broadcast ... that he had told his staff to delete material after CNN cited Infowars content that violated Twitter’s policies.”

This deletion of material is the basis of the new motion, which argues the material destroyed is salient to ongoing defamation suits against Jones.

One of the individuals bringing the motion is Neil Heslin, father of a six-year-old killed at the school. The new motion will make it harder for Jones to win the defamation suits brought by Heslin and others, as The New York Times explained: “Should the court find that Mr. Jones and Infowars willfully destroyed evidence, he, and possibly his lawyer, could be assessed thousands of dollars in fines and be subject to punitive action. Most important, the material that was destroyed could be presumed by the court as supporting Mr. Heslin’s claims against Mr. Jones, bolstering his case.”