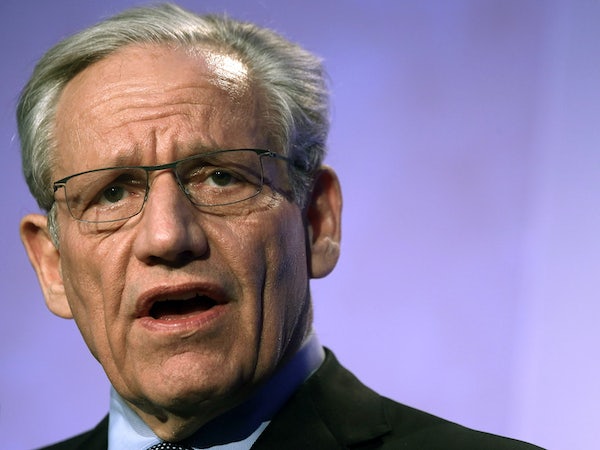 The Washington Post is reporting some of the details in Fear, the forthcoming book by legendary reporter Bob Woodward. The book seems to portray a chaotic White House where senior staff goes to extraordinary lengths to undermine the policies of a president they regard as an idiot.

Among the startling revelations in the book is the claim that in April 2017, Trump ordered the assassination of Syrian dictator Bashar al-Assad, who had just launched a chemical weapons attack. “Let’s fucking kill him!” the president reportedly said in a phone conversation with Defense Secretary Mattis. “Let’s go in. Let’s kill the fucking lot of them.” Mattis told Trump that he’d work on it. Then Mattis told his own aide, “We’re not going to do any of that. We’re going to be much more measured.”

Woodward also reports that former chief economic advisor Gary Cohn was in the habit of stealing documents from the president’s desk as a way of making sure that certain policies would not be carried out:

Cohn, a Wall Street veteran, tried to tamp down Trump’s strident nationalism regarding trade. According to Woodward, Cohn “stole a letter off Trump’s desk” that the president was intending to sign to formally withdraw the United States from a trade agreement with South Korea. Cohn later told an associate that he removed the letter to protect national security and that Trump did not notice that it was missing.

When Trump had a letter drafted up withdrawing the United States from NAFTA, Cohn said, “I can stop this. I’ll just take the paper off his desk.”

The willingness of Trump’s staff to subvert their commander in chief is a mixed blessing. On the one hand, it’s obviously useful to stop Trump most dangerous impulses from being carried out. On the other hand, not obeying the lawful order of a legitimately elected official is also a subversion of democracy. Woodward refers to it as “an administrative coup d’etat.” If Woodward’s book is accurate, the United States doesn’t have a functional presidency right now.