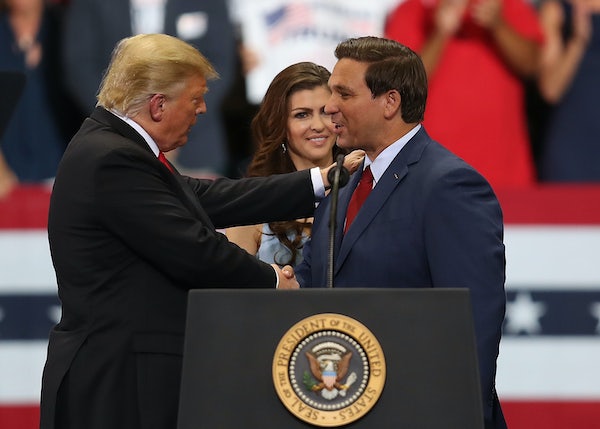 Florida rally shows that midterms are making the GOP even more Trumpian.

A campaign rally in Estero, Florida, not only allowed President Donald Trump to energize the GOP base, it also showed how completely he’s come to dominate the Republican Party. Although the GOP is facing bleak prospects at least in terms of the House of Representatives, Trump himself remains the undisputed master of the party, the one setting the agenda that elected Republicans follow. As The Washington Post notes, Trump “focused on the issue of immigration in the home stretch of the campaign as part of a strategy to stoke fear and galvanize his core supporters to turn out in support of Republican candidates for the Senate, House and governorships.” He described birthright as a “crazy policy” which he would end.

“We’re getting prepared for the caravan, folks,” Trump told the crowd. “We’ve got a lot of rough people in those caravans. They are not angels. They are not.” He also said, “We’re tougher than anybody.”

Trump praised some local Florida Republicans, but his approbation was based on them being loyal foot soldiers in the cause of Trumpism. One he singled out for celebration was Congressman Francis Rooney. “So great to me on television,” Trump said. “I love it when he defends me. He’s brutal. He gets the job done.”

Congressman and gubernatorial candidate Ron DeSantis joined the president on stage and took a decidedly Trumpian tone in attacking his rival Tallahassee Mayor Andrew Gillum. DeSantis characterized Gillum as a “failed mayor” and claimed Gillum was “running on impeaching the president.” Then DeSantis, alluding to a federal investigation of Gillum, said, “Maybe we should impeach Gillum as mayor of Tallahassee!”

The crowd responded with a variation on a familiar chant: “Lock him up!”

It was Trump’s crowd and the Republicans are finishing the midterms as Trump’s party.