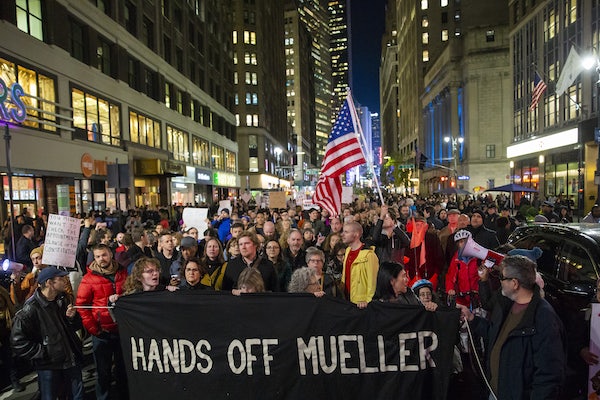 Trump’s acting attorney general might not be able to stop the Mueller investigation.

When President Trump appointed Matt Whitaker to replace attorney general Jeff Sessions, the general assumption was that it might threaten special counsel Robert Mueller’s ongoing investigation of alleged Russian interference in the 2016 election. Politico reported Wednesday, however, that political and institutional push-back against Whitaker’s appointment might hamper any attempt to shut down the special counsel’s inquiry. Significantly, the Department of Justice is wavering on the issue of whether Whitaker might have to recuse himself—as Sessions did—from any decision involving the Mueller investigation.

As Politico notes, “Department spokeswoman Kerri Kupec issued a statement late Tuesday signaling that Whitaker could still recuse himself from overseeing the Mueller investigation, a shift from the department’s initial position in the immediate aftermath of Sessions’ ouster that Whitaker had no plans to step out of the way on the Russia probe.” In the statement, Kupec asserted that Whitaker “is fully committed to following all appropriate processes and procedures at the Department of Justice, including consulting with senior ethics officials on his oversight responsibilities and matters that may warrant recusal.”

Opposition by Democrats, Politico argues, has “put Whitaker in a difficult spot, trapped between setting off a political firestorm by clipping Mueller’s wings and angering a president intent on having him do just that.”