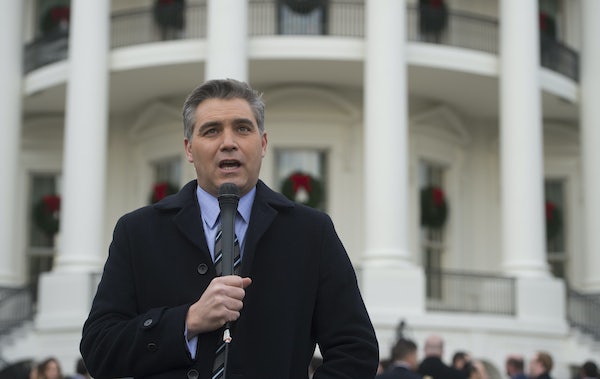 Even Fox News joins in widespread media support for CNN lawsuit against Trump.

On Wednesday, thirteen media outlets issued a statement supporting CNN and reporter Jim Acosta. CNN is suing the Trump administration for having revoked Acosta’s press credentials after the president took exception to some of Acosta’s questioning.

Whether the news of the day concerns national security, the economy, or the environment, reporters covering the White House must remain free to ask questions. It is imperative that independent journalists have access to the President and his activities, and that journalists are not barred for arbitrary reasons. Our news organizations support the fundamental constitutional right to question this President, or any President. We will be filing friend-of-the-court briefs to support CNN’s and Jim Acosta’s lawsuit based on these principles.

Fox News president Jay Wallace also made a separate statement. “FOX News supports CNN in its legal effort to regain its White House reporter’s press credential,” Wallace wrote. “While we don’t condone the growing antagonistic tone by both the President and the press at recent media avails, we do support a free press, access, and open exchanges for the American people.”

Fox News’s intervention is important because the cable news network is very popular with the Republican base, and, indeed, often shapes the thinking of President Donald Trump.