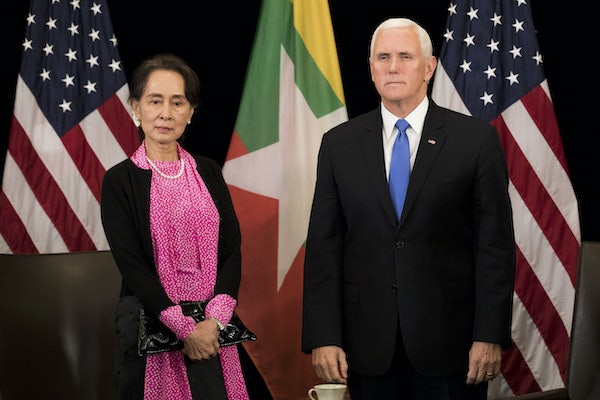 While attending the the Association of Southeast Asian Nations (ASEAN) Summit in Singapore on Wednesday, Vice President Mike Pence met with Myanmar leader Aung San Suu Kyi and chastised her for the atrocities her government is committing against Rohingya Muslims. The State Department has accused Myanmar of committing ethnic cleansing. Pence said atrocities against the Rohingya are “without excuse.” He also reprimanded Suu Kyi for the imprisonment of two Reuters reporters. “In America, we believe in democratic institutions and ideals, including a free and independent press,” the vice president said. “The arrests and jailing of two journalists last fall was deeply troubling to millions of Americans.”

In using the language of human rights, Pence is going against the grain of the Trump administration. President Donald Trump has generally been dismissive of human rights as a foreign policy concern and has tamped down on American criticism of autocratic regimes like Russia, China and Saudi Arabia.

In the Trump White House, Pence is one of the rare figures, along with former United Nations ambassador Nikki Haley, who continued to uphold human rights in the manner of older administrations, both Democratic and Republican. On previous occasions, Pence has talked like a mainstream Republican when challenging North Korea and China on human rights.

While Pence has been a loyal solider in supporting President Trump against all critics, the Vice President now has more room to maneuver since Trump is licking his wounds after the Republican Party’s poor showings in the midterms.

Politically, championing human rights has paid off by earning Pence applause even from some Democrats: