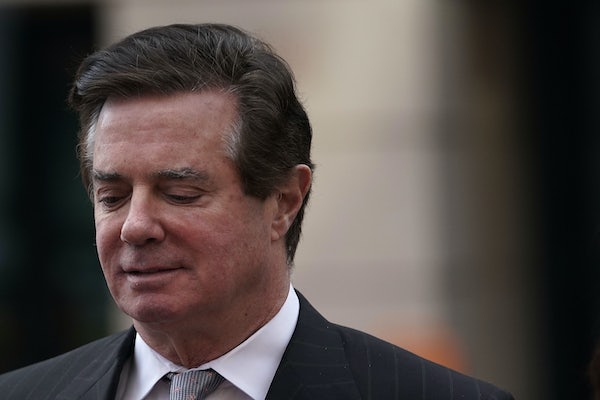 Paul Manafort is accused of violating his plea bargain. What does Mueller do now?

The onetime chairman of Donald Trump’s presidential campaign faces the possibility of extended jail time after prosecutors on the Mueller investigation accuse Manafort of lying to them. These prosecutors have filed a motion requesting the immediate sentence of Manafort.

As The Washington Post reports, this new situation raises questions about the future of the Mueller investigation. “The apparent collapse of Manafort’s cooperation agreement is the latest stunning turnaround in his case, exposing the longtime Republican consultant to at least a decade behind bars after he pleaded guilty in September to charges of cheating the Internal Revenue Service, violating foreign-lobbying laws and attempting to obstruct justice,” the newspaper reports. “The filing also indicated that Mueller’s team may have lost its potentially most valuable witness in Manafort, a top campaign official present at discussions at the heart of the special counsel’s mission to determine if any Americans conspired with Russia’s efforts to sway the U.S. election.”

Journalist Marcy Wheeler, a close watcher of the Mueller investigation, raises two interesting theories about the latest development. First, that Mueller might have been using Manafort as a bait to feed false information to President Donald Trump (whose legal team has been in contact with Manafort’s team). Second, Mueller will be able to issue filings in support of a stiffer sentence that will include the key components of the case for collusion. In effect, Mueller will be able to issue a report without the authorization of the Trump-friendly acting Attorney General Matt Whitaker.