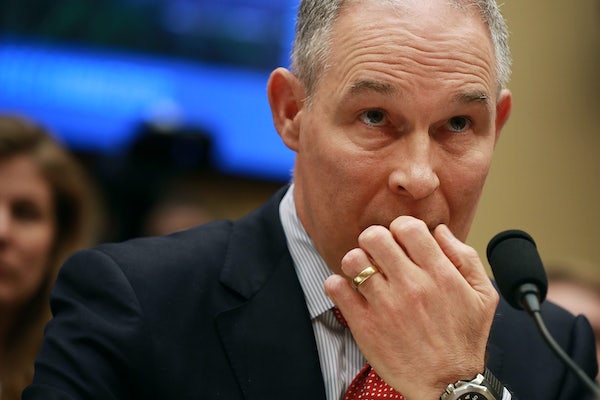 The Daily Beast is reporting that a Fox News program broke basic journalistic rules in order to secure interviews with former EPA administrator Scott Pruitt. According to the report, which is based on emails obtained from a Freedom of Information Act request made by the Sierra Club,  Pruitt’s staff “chose the topics for interviews, and knew the questions in advance.” In at least one instance, “Pruitt’s team even approved part of the show’s script.”

In a May 2017 email, a Fox News producer asked, “Would this be okay as the setup to his segment?” Appended was the script used for the introduction of the segment. Pruitt’s office wrote back, “Yes — perfect.”

The result was a segment that closely followed the prepared script. In fact, the Fox News hosts were taken aback when Pruitt said something unexpectedly newsworthy. But they quickly returned the show to its pre-planned talking points.

“The only question that a Fox & Friends host asked that was not previously discussed with Pruitt staff did make an incremental amount of news: Pruitt said he believed the U.S. should exit the Paris climate accord, a small change from calling it a “bad deal” in an interview just a month before,” The Daily Beast notes. “But after Pruitt stated his view, host Steve Doocy did not press Pruitt. Instead, the host quickly transitioned back to the agreed-upon topic: the administrator’s upcoming visit with coal miners.”

David Hawkins, a journalist who worked for CBS News and CNN, told The Daily Beast that, “Every American journalist knows that to provide scripts or articles to the government for review before publication or broadcast is a cardinal sin. It’s Journalism 101.” He added that, “This is worse than that. It would and should get you fired from any news organization with integrity.”

In  statement to The Daily Beast, a Fox News spokesperson wrote, “This is not standard practice whatsoever and the matter is being addressed internally with those involved.”