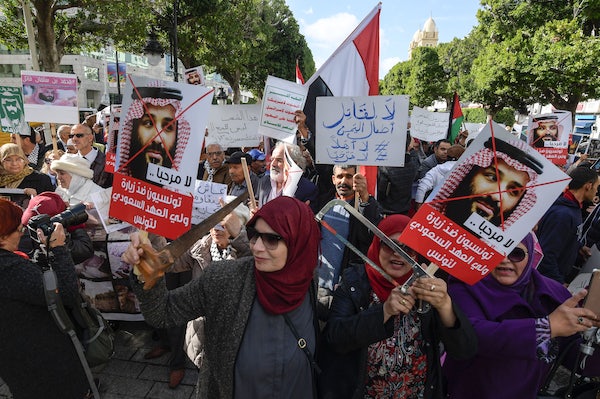 David Ignatius, a long-time Washington Post columnist with extensive sources in the intelligence community, has written an in-depth survey of contemporary Saudi politics that places is the murder of journalist Jamal Khashoggi in the context of an intramural war among the Saudi elite. According to Ignatius’ account, the Khashoggi killing follows a familiar pattern that emerged in 2015 after the death of King Abdullah. The king’s death created a power struggle between Abdullah’s sons and his brother, Salman, who became the new monarch.

King Salman quickly ceded power in practice to his son, Crown Prince Mohammed bin Salman. Both the new King and the Crown Prince are insecure in their position, so they’ve been pursuing a sweeping purge of their perceived political enemies. One remarkable story told by Ignatius involves Saudi businessman Tarek Obaid, who was allied with the Abdullah camp. In 2016, while Obaid was in China, bin Salman’s allies falsely told the Chinese government that Obaid was a terrorist financier.

According to Ignatius, this led the Chinese government to act as bin Salman’s kidnappers when Obaid flew from Shanghai to Beijing. “As Obaid left his plane, he was stopped by more than 40 plainclothes Chinese security men,” Ignatius reports. “The leader of the group, speaking in Arabic, is said to have told Obaid: ‘We are the Ministry of State Security. Are you going to cooperate?’ Obaid surrendered; his head and body were covered in a bag so tight that he couldn’t see or move unassisted; he was taken to an interrogation facility somewhere in Beijing and handcuffed to a chair.”

Obaid was detained and tortured until the Chinese government figured out they had been deceived. He was then released, and currently lives in exile in Switzerland.

The kidnapping of Obaid was one of many cases of bin Salman lashing out against those he felt threatened his hold on power. “The suspicion of perceived enemies and desire for absolute control only deepened,” Ignatius observes. “Starting in the spring of 2017, the Saudis began a secret program for kidnapping dissidents and holding them at secret sites, according to knowledgeable U.S. and Saudi experts. The program involved a special ‘tiger team’ operating in tandem with the Center for Studies and Media Affairs at the royal court, headed by [bin Salman ally Saud al-Qahtani].”

One of the major arguments now being made by the Trump administration for continued support of bin Salman’s government is that Saudi Arabia is a bulwark of stability. This point was recently articulated by Secretary of State Mike Pompeo in a Wall Street Journal column. But Ignatius’ account leaves little doubt that under the Crown Prince, the oil-rich kingdom is in fact a destabilizing force in the world.

Ignatius ends on a somber note:

The brutal paranoia of MBS’s royal court in Riyadh recalls Baghdad in the days of Saddam Hussein. The spotlight cast by Khashoggi’s killing gives Saudi Arabia, and the United States, a last chance to check a slide toward Hussein-like despotism from overwhelming the region.

The House of Saud rules with a sometimes bloody hand. The United States, as the kingdom’s key ally, has an obligation to calm this family feud before it does any more damage to Saudi Arabia and the world.