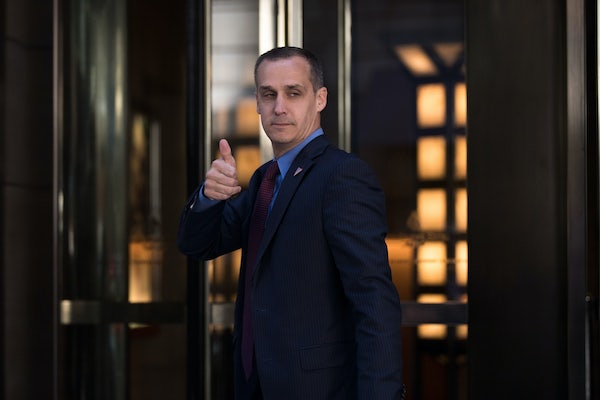 Politico is reporting that Lewandowki, who was once Donald Trump’s campaign manager and continues to be an important crony of the president, had a near altercation with some Florida politicians at the Trump International Hotel in Washington on Wednesday. The dispute arose when Lewandowski felt that Florida Senate President Bill Galvano and Florida state Senator Jeff Brandes weren’t appreciative enough of the impact of Trump’s campaigning in Florida in the midterms: “Lewandowski became more aggressive, witnesses said, prompting Brandes to stand up and wag his finger at Lewandowski. One witness saw Galvano instinctively clench his fist at his side; two others said they heard him make a polite request of his wife: ‘Hold my scarf.’”

Lewandowski is no stranger to overheated public confrontations. In March 2016, while serving as campaign manager, Lewandowski grabbed a female reporter, Michelle Fields, by the arm. The case was investigated by the police but charges were not pursued. On February 2018, White House Chief of Staff John Kelly got into a scuffle with Lewandowski. As The New York Times reported, “As Mr. Kelly walked toward a hallway leading back to his office, he called to someone to remove Mr. Lewandowski from the building. The two then began arguing, with Mr. Lewandowski speaking loudly. Mr. Kelly grabbed Mr. Lewandowski by his collar, trying to push him against a wall, according to a person with direct knowledge of the episode.”

In October 2018, Kelly got into a profanity-laden argument with National Security Advisor John Bolton. As Bloomberg reported,  “The shouting match was so intense that other White House aides worried one of the two men might immediately resign.”

In November 2017, Kelly reportedly got into a near fistfight with an ICE official who the president had invited into the White House.

Trump himself seems to encourage this behavior by the rhetorical sanction he gives to violence—as when he seemed to give his stamp of approval to Congressman Montana Congressman Greg Gianforte for bodyslamming a reporter.