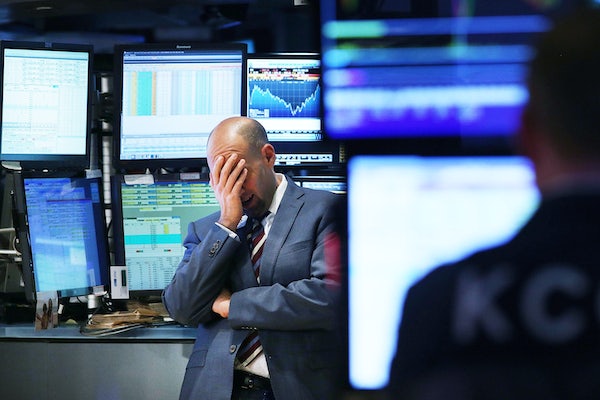 Wall Street is getting jittery after finally paying attention to the news.

Until a few months ago, the stock market seemed to respond to the tumultuous news of the Trump era with blissful equanimity. It didn’t matter what Trump tweeted, what investigations were underway, or which countries he threatened with trade war or even nuclear destruction. Stocks kept going up and down of their own accord. But this period of Wall Street being kept separate from politics seems to be ending.

As The New York Times reports, news that had previously been shrugged off by Wall Street (notably trade war, rising interest rates, and the slowdown of other large economies) is suddenly making investors nervous.

“Last week, elements of all of those combined to drive the S&P 500-stock index down by 4.6 percent, its worst weekly drop since March and one marked by stomach-churning price swings. Stocks are now down 1.5 percent this year,” the newspaper notes. “More volatility could be in store, as investors assess the allegations by prosecutors that President Trump directed illegal payments to ward off a potential sex scandal, and the possibility that he sought to secretly do business in Russia during his 2016 campaign for the White House.”

The Washington Post also sees signs that the stock market is taking stock of a storm global landscape. “U.S. markets deepened their losses Monday as Britain’s political crisis around Brexit clouded investors’ outlook. British Prime Minister Theresa May put off a key parliamentary vote on her country’s exit from the European Union,” the Post notes. “Investors are also on edge about developments in the U.S.-China trade dispute.”

Investment strategist Julian Emanuel argues the sway of the news cycle on politics is out of the ordinary. “The fact is that politics is driving the economy to an extent that is very atypical,” he told The New York Times. “We would say probably to the greatest extent that we’ve seen in our investing lifetime.”

While the stock market is not the same as the economy as a whole, the current nervousness on Wall Street could presage a recession. If so, there is a real possibility of a feedback effect. President Donald Trump has taken comfort in the success of the stock market under his watch. But once that source of boasting is gone, Trump could become even more erratic. This would create a situation where the president and Wall Street are egging each other on in a downward spiral.