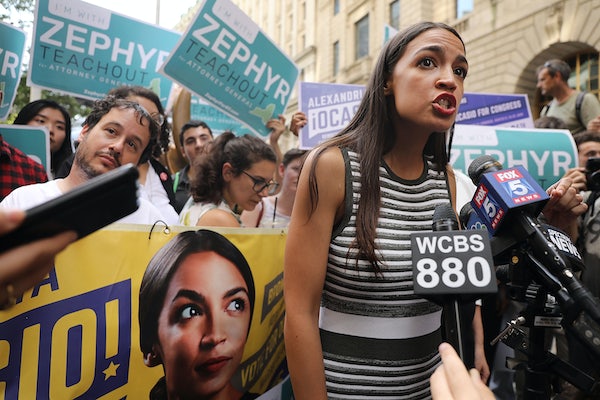 Is there room for a left-wing version of the Freedom Caucus?

Alexandria Ocasio-Cortez, the democratic socialist who won an upset primary victory over Democrat Joe Crowley in New York’s 14th Congressional District, suggested the creation of a more aggressive left-wing sub-caucus in a recent interview. As reported by The Intercept’s Ryan Grim, Ocasio-Cortez defined herself as a “consensus-builder,” but believes that a more militant bloc could help steer the Congressional Progressive Caucus in a leftward direction:

“The thing that gives the caucus power is that you can operate as a bloc vote in order to get things done,” Ocasio-Cortez told Daniel Denvir, host of Jacobin’s “The Dig.” “Even if you can carve out a sub-portion, a sub-caucus of the progressive caucus, even if you could carve out that, even a smaller bloc, but one that operates as a bloc, then you could generate real power.”

The idea appears divisive. As Grim notes, elected progressives aren’t as likely to favor the Freedom Caucus’s ruthless tactics. But change is in the wind.

Overall, the party’s potential freshman class hasn’t shown much interest in keeping the party’s elder statesmen in power. According to Cook Political Report, around one-third of candidates interviewed said they wouldn’t support Nancy Pelosi for speaker if Democrats win back the House in the November midterms.