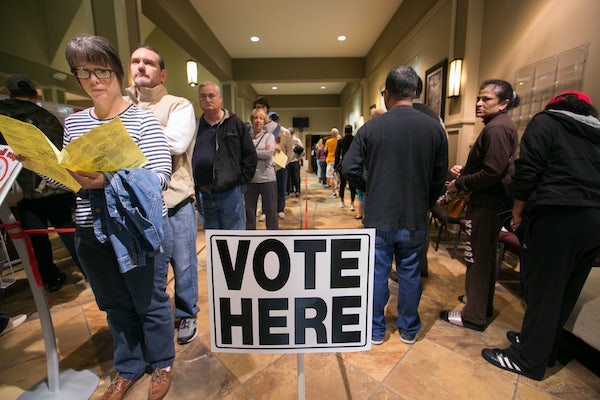 Georgia (where else?) is bedeviled by long lines and voting problems.

The Associated Press is reporting hours-long waits and equipment malfunctions at polls across America. “Some of the biggest problems Tuesday were in Georgia, a state with a hotly contested gubernatorial election. Voters reported waiting up to three hours to vote,” the AP said. “At a polling place in Snellville, Georgia, more than 100 people took turns sitting in children’s chairs and on the floor as they waited in line for hours.” In Atlanta, election officials blamed delays on the failure of absent workers and overworked machines.

Politico Magazine’s Michael Grunwald, however, reported that voting is going smoothly in most of Georgia:

It’s likely that part of the trouble is due to heavier than expected turnout, swamping the system. But in Georgia, as elsewhere, some of the problems could be deliberate. Brian Kemp, the secretary of state who is both overseeing the election and running for governor, has been accused of engaging in systematic voter suppression.

The Supreme Court’s weakening of the Voters Right Act of 1965 might also play a role. “More than 200 polls have closed since the Roberts Court gave the state a green light to discriminate,” Bob Moser noted in The New Republic in October. “And as The Atlanta Journal-Constitution revealed this summer (Kemp’s secretary of state office conveniently keeps no track of the closures), they correlate in near-perfect synchronicity with concentrations of high poverty rates across the state—the places where fewer people have cars to drive to the polls, where public transportation is often non-existent, and where African Americans vote Democratic.”