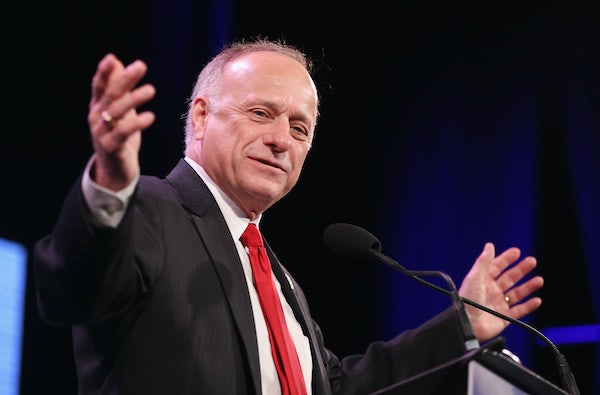 Steve King closes out his campaign with racism, homophobia and a press ban.

The controversial Iowa congressman continues to be one of America’s most inflammatory politicians. On Monday, he joked that there could be new Supreme Court openings because Justices Elena Kagan and Sona Sotomayor “will elope to Cuba.” The same day, King also made a comment that seemed to liken Mexicans to “dirt.”

As The Weekly Standard reports, King made the comments while talking to constituents about pheasant hunting and soil depletion. The conversation went like this:

King: I raised a bunch this year, and they don’t have enough bite. I guess I’m going to have to go and get some dirt from Mexico to grow the next batch.”

Audience member: Trust me, it’s already on its way.

King: Well, yeah, there’s plenty of dirt, it’s coming from the West Coast, too. And a lot of other places, besides. This is the most dirt we’ve ever seen.

It’s difficult to read King’s comments as anything other than a sly insult aimed at Mexicans.

On Tuesday, King’s office banned the Des Moines Register, Iowa’s leading newspaper, from a campaign event. Jeff King, the congressman’s son and a staffer on the campaign, explained in an email that, “We are not granting credentials to the Des Moines Register or any other leftist propaganda media outlet with no concern for reporting the truth.”