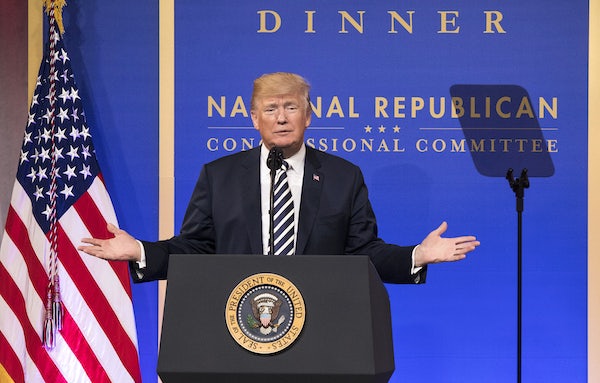 Trump is building a wall against a primary challenge, whether he needs to or not.

Two significant developments show that President Donald Trump’s campaign is worried about a primary challenge before the 2020 election. First, Politico is reporting that the Trump campaign is fusing with the Republican National Committee. Secondly, The Washington Examiner notes that the South Carolina GOP might do away with its primary altogether.

According to Politico, “the Trump reelection campaign and the RNC will merge their field and fundraising programs into a joint outfit dubbed Trump Victory. The two teams will also share office space rather than operate out of separate buildings, as has been custom.” The news outlet adds that, “With talk of a primary challenge to Trump simmering, the act of formally tying the president’s reelection campaign to the resource-rich national party will make it only harder for would-be Republican opponents to mount a bid.”

Meanwhile, as The Washington Examiner notes, the South Carolina GOP “could cancel its marquee presidential nominating contest in 2020 in a move to protect President Trump from any primary challengers.” The website cites the precedent of Iowa not issuing ballots in 1992 with the goal of protecting then-incumbent President George H. W. Bush and South Carolina cancelling its primary in 2004 to shield George W. Bush.

The intriguing question from this news is why the Trump campaign is working so hard to guard against a primary challenge. After all, as the Examiner rightly notes, “The president is solid with Republican voters and would almost certainly defeat any intraparty opposition.”

As CNN reported on Tuesday,

President Donald Trump continues to look in prime position to win his party’s nomination for president in 2020. While Republicans such as John Kasich may run, a look at the numbers reveals they have a tough road ahead of them.

CNN’s latest Iowa poll shows little room for a successful primary challenge in the first in nation caucus. Trump scored an 81% approval rating among registered Republicans. The vast majority, 67%, of Republicans also said that they would definitely vote to re-elect Trump.

However commanding a lead he has in polls of Republican voters, Trump isn’t taking any chances and is gearing up to create a fortress to keep out any challengers. Ironically, it’s possible that the president and his team have bought into the Never Trump fantasy scenarios of a party revolt.