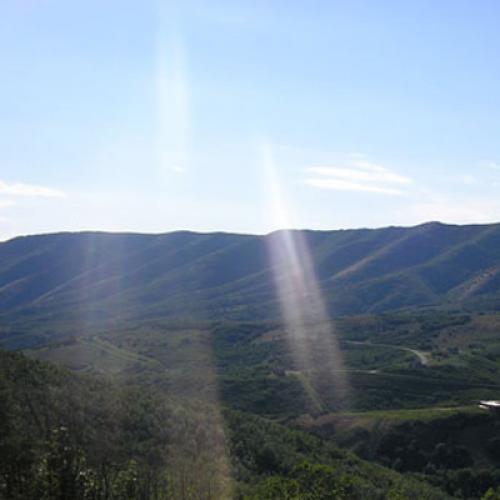 Emigration Canyon, just to the east of Salt Lake City, is the route by which the Mormons came down the Wasatch mountains to the spot where Brigham Young gazed on the inhospitable desert valley before him and improbably announced, “This is the place.” It seems wholly in keeping with the literalness that is one of the strengths of Mormonism that the imposing memorial here is called the This Is The Place Monument. One of the peculiarities of Emigration Canyon is that, in spite of its place in Mormon lore, it is not Mormons but gentiles who have usually lived there; and though Mormon missionaries are active all over the world, they seem never really to have tried to proselytize the people of the canyon. When two young missionaries did once turn up at my friend’s house, where I have been staying, about 1,300 feet above Salt Lake, they came off the mountains on foot, and she asked them if they were unaware that there is now a paved road up which they could have driven. The engaging simplicity in this story only reflects an outlook on life the Mormons seem somehow to have preserved, even with the adjustments they have made to mainstream America.

SO I FLEW BACK from the West, where snow is white and not regarded as an enemy, to this capital city in the East, where snow is black and the people were as palsied by it as if nuclear winter had struck. But this was no more dismaying than meeting again the Easterners’ sniggers at the Mormons, masking a prejudice that can only recall the persecution that pursued them across the continent. A very successful Mormon businesswoman and a direct descendant of one of the founding families of Mormonism refused to grant me a more formal interview after I met her socially. She felt I was out to put down her church, and although she was mistaken, the fact is that the Mormons have every reason for still feeling misrepresented and persecuted. More generally, there is in the typical Eastern attitude toward the Mormons a deep-seated, unacknowledged prejudice against all religion as such—unless that religion is so drained of all authoritative moral and social precepts that a church or temple might as well be an ongoing block party of secular good feeling. It is impossible to come back now and not feel that the Democrats will once again blow it in the next presidential election if the Eastern influence in the party does not stop scoffing at the necessity that millions of ordinary Americans feel to ground their values in religious belief, teaching, and even authority. In all presidential elections for the past 20 years (except one in which the Democratic candidate was a born-again Southerner), the South, the West, and the Southwest have been thrown into alliance to elect a Republican president, precisely because of this kind of Eastern prejudice,

IN MY FIRST ENCOUNTER with the Mormons of Salt Lake City three years ago, I found myself one Fourth of July at my non-Mormon friend’s house, where most of the guests were Mormons, the majority of them belonging to a single family of three generations that seemed as numerous as the tribes of Israel that sprang from all those endless “begats” in the Old Testament. At one point on the lawn in the strong Western sun, my friend looked up at one of them, a young man, fair-haired, clean-cut, clear-eyed, who had served his term as a missionary in England, and said, “You all look so healthy and happy.” He answered simply, “We are all healthy and happy.” It is the kind of remark that can make me sick, and pleading that the sun was too much for me, I fled to the sunless indoors to cultivate shady remembrances of decadence and corruption when I was his age. Many of the Mormons’ certainties are uncongenial to me, I find it impossible to take seriously the revelations in the Book of Mormon;I find unacceptable the place ordained for women in both their church and the wider community; and it supports causes I oppose, including the lavish funding of the whole network of right-wing religious organizations. But that is quite different from a refusal to acknowledge that their staunchness in their faith and way of life upholds other values cherished by the vast majority of ordinary Americans, which they feel have been seriously threatened in recent years—not least the strength, stability, and attractive numerousness of the characteristic Mormon family.

AND IF THERE IS a reflex prejudice against religion in the East, there is also a supercilious attitude toward the West, which is regarded as a playground for Easterners, and otherwise an intellectual and cultural waste (a sniff of superiority that is of course also extended to the South and Southwest). What is unacknowledged is the energy and fabulous spaciousness of the West, which one feels in one’s first bound to the great bowl of the Western sky. The feeling of freeing is not only physical. It is as if Westerners know they are still at the beginning, that the making of America has hardly even started. The East should be proud and inspirited by the fact that the energy it once had it has sent forth across the continent to people the land. And one thing that was taken across the country was the very religious impulse that first made landfall on Plymouth Rock. Even the characteristic entrepreneurial energy of the West harks back to the same energy that was for so long the mark of New England. The East seems today to have forgotten that the entrepreneurial energy went with the religious energy.

I AM PLEADING FOR no more tolerance for the Mormons than they extend to others (though in fact they extend quite a lot, and Salt Lake is quite a liberal city, and certainly unoppressive in its spirit). After the long history of persecution of the Mormons, it is time the East extended to them a more open, generous, and sympathetic interest. My friend invited the two missionaries who tramped up Emigration Canyon to return. They did so regularly for three months. I would like tapes of her long dialogues with them, and since she holds her own beliefs and opinions forcefully, I can believe that the eager apostles said good-naturedly in the end that it might be better for the peace of their church if they failed to convert her. It is that good nature of exchange on both sides that is needed (not only with the Mormons), and since the Eastern influence is so powerful in the culture and media, it is for the East to open its mind first to a people who are, after all, thoroughgoing Americans.

This article appeared in the March 2, 1987 issue of the magazine.