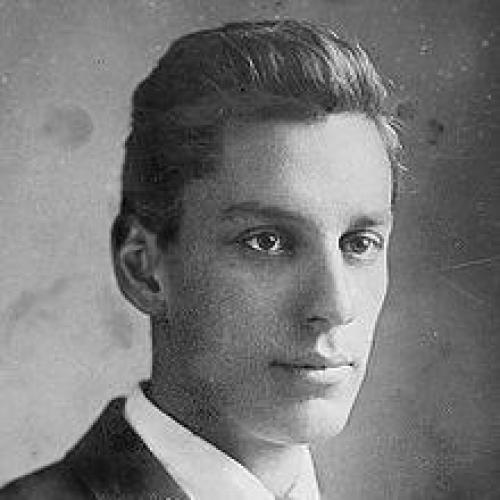 Journalism is the unique literary achievement of this age. And journalism has brought some benefit to the literary tradition. It has elevated lucidity and human interest to the high place of esteem where in a democratic society they belong. It has made the laborious task of imitating library echoes in order to get into the Atlantic Monthly, unnecessary. It has rendered book-fed and literarious writers as obscure as they are tiresome. But journalism is not literature; it is business. And with some accidental exceptions the tendency of journalism to insert itself into the place of literature is a disaster to the art of writing. I am thinking of the new dilute variety of prosy poetry which is watering the country, and in order to separate myself from those who have any conventional or technical prejudice against the composition of poetry without meter I call it Lazy Verse.

Amazing are the metaphysical theories which those who produce this material put up to justify their professional incapacity for the intense rhapsodies of art. I am not going to dispute those theories, for of all obvious rationalizations of personal inclination, the so-called “sciences” which an artist constructs about his art are the most obviously unscientific. When a man starts a school of poetry, you can be sure that he has an impulse to create something unique, but lacks the energic capacity to sit down and do it. Every great poem is a school of poetry, but it does not issue circulars about itself. Futurism, Imagism, Vorticism, the “Sceptric School,” Polyrhythmic Poetry—all these names, and the others, are efforts to compensate a sense of creative inferiority. So let them pass.

But that poetry is more and more being written without meter, and that in consequence more and more poetry is being written, and that those who so write are most of them convinced that they have gained in freedom and power to convey realizations to the imagination, is a fact which any true science of poetry will have to consider. It will have to estimate the motives, and weigh the values of the “free-verse”tendency in general. I am going to make a beginning in that direction by pointing out that in the majority of cases a mere lack of energetic idle time, or the habit of intense concentration, is the motive to free verse, and the only value gained is the journalistic dilution which enables poetry to expand and multiply and cover space, as all the rest of our writing does in this day of the innumerable magazines and the enormous newspaper.

To read William Blake’s poem “To the Evening Star,” or to read passages of the Psalms, or Song of Solomon, in the English Bible, or of Tagore’s or Giovannitti’s poems, is enough to prove to anyone that realizations of the utmost poignancy can be conveyed without meter by the poetic use of names. Perceptible forms too can be engendered in that exaltation in which qualities of thought or passion have as clear definition as qualities of sound. Even the very absence of form, and often of intensity itself, can have poetic value in so unique an achievement as Walt Whitman’s “Leaves of Grass.” It was necessary that some miraculously powerful poet should burst up through the fine pages of recorded high passion with the uncouth realities of the hours of a man’s everyday life. This could only be done with the everyday manners of language. It could only be done irregularly, verbosely. It could only be done unsatisfactorily, for if it were satisfying it would not be the unqualified and incommensurable reality that was required. But persons who have drunk the whole draught of Walt Whitman’s poetry and realized that it is an eternal achievement in literature, and persons who think the English Bible and many other unmetrical visions are exalted poetry, are still entitled to find the general tendency of modern “ Free Verse” dissolving and wearisome in an extreme degree.

There are two kinds of people who become infected with journalistic free verse—poets and prose-writers. The motive which brings prose-writers to this form is the same as the motive which makes magazine editors fill prose full of paragraphs and little sub-heads that have nothing to do with the subject of discussion. It is a business of “breaking up the type.” It is a part of the new art of display-advertising. It makes the prose easy to read. And the necessity of that is a direct outcome of the fatness of the Sunday newspaper. We live under the weight of so much printed material, for the daily absorption of which we feel responsible, that every effort must be made to tickle us and kick us and jog us along so we will get through anything to the conclusion. So far from being a return to primitive, naive or simple styles of writing, this breaking up of continuity in lines neither demanded by mechanics nor suggested by music, is the height of effort at sophisticated stimulation of a jaded perception.

Poets write the new free verse for a more complicated series of reasons, the matrix of which is indeed primitive. It is the aboriginal indolence, which if it had been one ounce heavier would have eliminated the necessity of our writing poetry at all, or doing anything else that pertains to energic civilization. I am speaking now of the poets who have passion and talent enough to produce in their life-times a few gems of concentrated expression, but who have fallen in with the flow of the magazines, and accepted their fatal facility as the type of literature in our time. Another side of this question is presented by the fact that free verse advertises the chance of poetic creation to many persons who ache with feelings but lack the agility of wit that metrical and rhymed excellence demand. They have gained confidence to express themselves in poetry, and for that all wise lovers of the art will be thankful. But even for them, now they have made the venture, it may be that a more rigorous self-discipline, though it should not produce so many poems that were “all right,” would produce lines and passages more adequate to their passion, and more stimulating than mere “acceptableness” to those who read them. At least it is of dubious benefit to an art that more people should undertake it merely because its difficulties have been relaxed by an easier convention. It used to require a very high combination of faculties of heart and brain, with strong concentration added to these, to make a poem which would endure reading at all. Today all one has to do is to say something. And anyone who has something to say can do that.

A person whom I suspected of trying to propagate one of those self-advertising schools of poetry, by calling some free verse effluvium “poly-rhythmics,” once mailed me at my request a loose-sheet note-book, and I submit my response as a proof of this statement.

I find them so yielding to poetry.

So yielding also to prose.

So yielding and so sweet to the assaulting pen.

If you can call that song which is the very soul

I will put forth small buds of thought and feeling.

I will celebrate the paper that I sing them on.

And ask you, by the muse of mussiness and paleness and decline,

To send me on another note-book, open at the side.

And measuring ten by eight; for ten is not too many inches.

Nor is eight too few.

To plant these boneless syllables, these molluscs of mute nature, on.

In copulating rows that shall regenerate unto infinity.

And crowd the world with stringy puddles of inarticulation,

Until red hells of vengeance like the flames of poetry

Purging space and holy nature of this slow and sleep-engendering gangrene.

And sending down to violent oblivion and intense decay.

With one last heaven-searching scream that shall alone remain in memory.

It is not only the ingenuity of mind demanded to construct, without awkwardness and artificiality, the compelling forms of poetry that is lacking in these journalistic poets; it is that rhapsodic trance of the whole being which makes those forms savagely aspired to as a war-dance or a hypnotic drug. People who declare that there are “no new rhythms” possible in metric poetry, are people so neutralized with effete parlor civilization that their vital organs are incapable of resounding to the fundamental trance-engendering stroke of the tom-tom. They are incapable of hypnosis. They are incapable of naively falling asleep to dream. They do not know what fundamental rhythm is. If they did, they could not but distinguish that in their minds from the superficial forms of phrasal music which an artist inevitably superimposes upon it, and they would know that just as many phrasal patterns are possible in a fundamental rhythmic trance, and a great many more probable, than in the state of hyper-sophistical intellectual preciosity which they have found out how to exploit as primitive and free. Too much neural excitation and too little of the booming pulse of the blood is what distinguishes this freedom from the freedom of the poet who is lost in a rhapsody of song. It is easy to be free by simply declining to engage a medium offering a vigorous resistance of its own; but to be free by virtue of the power to conquer with your passion everything that stands against it in the genuine utilities of an art, is a freedom worthy of the boast.

To use line division at all is to acknowledge the organic value to imaginative realization of the semi-regular recurrent stimulus, out of which in aboriginal recitative the forms of poetry arose. To use it with arbitrary opportunism, so that no judgment or choice, human or superhuman, not even your own, could ever put your poem together again if it fell apart, is neither primitive nor free, nor interesting, but simply obtuse. It reveals a lack of sensibility to the real quality of the thing.

In all arts it is the tendency of those who are ungrown to confuse the expression of intense feeling with the intense expression of feeling—which last is all the world will long listen to. The journalistic vogue of free-verse encourages this kind of confusion in poetry. It gets people to spend an entire literary life cultivating an emotional personality instead of cultivating an art, because there is not enough resistance in the medium of the art to make it worth going up against. In order to produce anything which will compel attention beyond the vogue of the Sunday paper and the everyday magazine, it is necessary to concentrate attention upon the making of something, more even than upon the passion out of which it is made; and that is one thing that the forms of rhythmic poetry compel us to do. Having the habit of such effort, it is not impossible that we might on some occasion achieve one of those formless forms, like Blake’s, that are so rare as to be remembered through the centuries. It is not impossible that we might subdue the listener to our passion without form as well as without metrical music. Nothing can be declared impossible to the whims of the artistic impulse. But the general deliquescence of all high-strung and concentrated expression which the journalistic commerce of our time is accomplishing can be declared incompatible with the whole spirit of art. And that any writer living in this wide stream of watery verbal emotion can learn to produce great poetry by pouring these long verses into that stream, can be declared tragically doubtful.