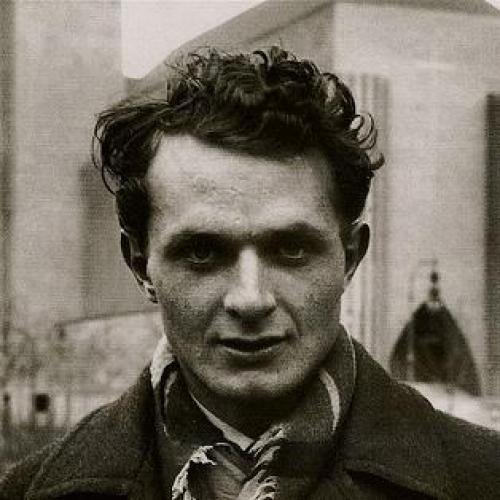 The Strings are False

“Brilliant” was I suppose the epithet inevitably applied to Louis MacNeice by his contemporaries at Marlborough School and Oxford University. In his case it is especially suitable because it suggests a somewhat opaque surface shining, but also concealing. The question which one asked oneself with MacNeice was what went on fathoms below and perhaps also many miles above this surface. It is a question which perhaps haunted him too, for one of his metaphors is of the iceberg, a third above and two-thirds below the surface. A surface, let me emphasize, does not necessarily have to be superficial. It has texture, radiates light, but all the same provokes questions.

In his personal relations, the opacity of surface resulted in many people finding MacNeice aloof, disdainful, detached and cold. He had a way of leaning back and gazing at one through half-closed eyes which scarcely covered a mocking glance. Secrets he surmised about oneself he did not intend to share, the glance said. They were for his notebook, which might be a long poem kept from day to day—Autumn Journal—oran autobiographical sketch written long after the event, but sharply remembered—The Strings are False.In his reminiscences even of a friend as close to him as Auden, there are patches of reserve which read like ice that has not melted in the surrounding pool of quite genuine admiration and affection.

That this detachment of MacNeice’s was noticeable enough is notorious. A famous occasion at which I happened to be present was when, late in the war, Archibald Clerk-Kerr (later Lord Inverchapel) the British Ambassador at Moscow, returning to London for a visit attended a party given by John Lehman for the young English poets of the thirties and forties. Throughout the party MacNeice, holding a glass in his hand, leaned against a piece of furniture, and gazed around him disdainfully, without addressing a word to anyone. Finally Clerk-Kerr went up to him and told him there was a matter about which he would like to be informed. Did MacNeice come from the Northern coast of Ireland? MacNeice acknowledged that he did. “Ah,” said Clerk-Kerr, “well that corroborates a legend I heard in my youth that a school of seals had landed on that part of the coast, cohabited with the natives, and produced a special race, half-seal, half-human.” MacNeice did look a bit taken aback, as Clerk-Kerr left the room.

One has to take it though that this reserve was essential to MacNeice’s integrity, which was great. The reader of The Strings are False can see also that it was compensated by an appreciation of his friends’ good qualities which he probably could not communicate to them, a genuine concern to form just estimates of others, and a total lack of malice. All the same, it is difficult to read his account of his relationship with Mariette, his first wife, without getting the impression of the extremely cold eye with which he judged her throughout, as fiancée and bride. He seems at pains to show that he was completely conscious of her affectations, artificiality and selfishness from the moment almost when, as an undergraduate, he set eyes on her. It seems more important to him to show that he was never deceived than to admit that he became disillusioned. He does also convey Mariette’s considerable attractiveness and charm, but what is curious is the extent to which his description of her is external and finds no point of rest where the reader can see her simply as a human being requiring not admiration or approval but sympathy. His treatment of the episode of his first marriage differs strikingly from that of John Hilton—his school and undergraduate friend—who writes an appendix describing Louis at school and Oxford giving the impression that Mariette was very much in love, something which MacNeice scarcely takes into account.

The truth of the matter is, I suppose, that MacNeice’s seeming coldness disguised reticence and pride. As he admits, he had cast for himself the role of Stephen Daedalus already at school, and the symbol of the ashplant stick remained with him until long after he left Oxford, when it was abandoned for the more communal gestures of the thirties. That he was Protestant Irish, that his mother died when he was at an extremely early age, that later his father remarried, that at school he quickly made a success of being a buffoon and making the other boys laugh by exaggerating his more grotesque qualities, and—most of all—that he always identified knowledge with power, all these things are significant.

The brilliant opaque surface which he exhibited in his behavior remains though a problem for the reader in his work. It is not only that one tries vainly much of the time to penetrate the center of MacNeice’s own sensibility, one also finds oneself trying vainly to get at the center of people and experiences he describes. In the autobiography he tends to see people as bundles of qualities of which they are made, as mirror-like and brittle as his own brilliance. He excels at describing stretches of behavior of friends, acquaintances, landscapes, cities. But everything seems as though painted on a moving band. He observes people through those unflickering half-closed eyes which never blink, but he never seems to ask what it is that makes them tick.

The result of this is a peculiar kind of negativism. In portraying his own attitudes—his liking for the Heraclitean philosophy, his irreligion, his distrust of politics, his personal relationships, he presents us with paintings on the moving band as brilliant as those of his wife or of a mistress. But while he is painting them he seems conscious that the attitudes will soon be replaced by others.

More than of anything else he is aware of flux, and his two longest poems. Autumn Journal and Autumn Sequel, are both journals written from day to day, without his knowing, when he wrote one section, what would come after. It seems very extraordinary that he should have chosen to write Autumn Sequel in terza rima, the form which, ever since Dante, poets have used when they wished to draw conclusions, and the one perhaps least suited to poetic journalizing. The earlier poem Autumn Journal consists of brilliant technical improvizations, with much variety to suit changes of mood, and for that reason alone seems the greater success. Perhaps MacNeice chose the form of Autumn Sequel as an act of defiance, throwing down the gauntlet at Dante. In a way, for mastery of rhyme and metrics it is a dazzling technical success, if you can—as poets did in the 19th century—separate technical achievement from the suitability of the form to the material.

But in the 20th century poets have made a mystique almost of thinking that the material should create the form, rather than the form be a frame into which the material is put. And in his strengths as well as his weaknesses, MacNeice belongs more to the 19th than to the 20th century. His attitude to writing poetry, which is to put skill before everything, to be inclusive in his attitude to technique and to material, and never to ask himself the question of a poem, “Is this too long?” is Victorian, and still more so the general spectacle he presents of the mind trained in Christianity, the classics and philosophy, using this training as a skeptical discipline for questioning the religion, the learning, and the philosophy, without ever expecting to find the answer.

It is difficult then to fit MacNeice into a modern poetry course. Modern poets have made form inseparable from content, and above all they seek conclusions, some structure of philosophy or belief on which to base their poetry. Yet MacNeice cannot be relegated to the 19th century either. He had qualities of temperament, and he had the mastery, to carry forward into the 20th century some of the attitudes of the 19th. If his content does not always justify the expansiveness of the form, the buoyancy and gaiety of his temperament does. To be convinced that MacNeice has something to say which his medium carries, one has to read section XXIII of Autumn Journal, which is about the end of the Spanish Republic, or the parts of Autumn Sequel about Gwilym (Dylan Thomas). Ultimately he is a poet of temperament, of gaiety and melancholy cultivated by wit, taste and learning, and held together by courage, the virtue he most admired. One of his most ambitious, not altogether successful poems, is The Kingdom, an attempt to chart, with many examples:

Under the crust of bureaucracy,

quite behind the posters.

Unconsciously but palpably there—

the Kingdom of individuals.

It is about people who recognize in one another, behind the mask, the real person, and as such it is moving, encouraging, coming from this very lonely man, the poetry of shared life, but not of terrible solitude. Terrible solitude when it does occur is death, and perhaps MacNeice’s best poems are the ones he wrote at the end of his life when he had an intuition of this approaching conclusion.