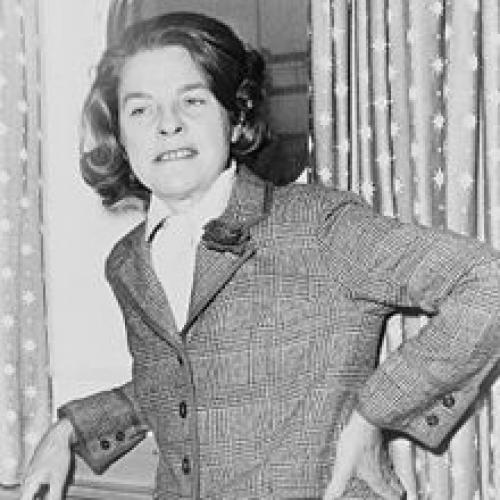 A review of The Man Who Loved Children by Christina Stead.

Here is a great stew of material by a woman writer, which, according to the jacket, has been boiled down several times. It began as a million words, then dropped to eight hundred pages, and at last to five hundred and twenty-seven. It is still no bouillon cube. Though the blurb-writer is able to say that “Part of the gemlike clarity of this book is due to the process of refinement and condensation by which the author, one of the great craftsmen of our time, has pared down, etc. . . .” the reader, who has not had access to the previous drafts, can only assume that the gemlike clarity is relative. The author of this peculiar, breathless, overwritten, incoherent novel has been hailed by Rebecca West as “one of the few people really original we have produced since the War,” and by Clifton Fadiman as “the most extraordinary woman novelist produced by the English-speaking race since Virginia Woolf.” If the present novel is representative of Miss Stead’s work, in one sense both these statements are true: so far as I know, nothing quite like this has ever been seen in print before.

If the book must be fitted into one of the familiar niches, one can say, I suppose, that it is a satirical portrait of a self-styled idealist. The title character is Samuel Pollit, a government office holder of Washington, D. C, with an hysterical wife and a large family of lower-middle-class relatives and children. He is a crank of the free-thinking, grow-your-own-vegetables, study-the-animals, get-close-to-Nature, learn-Esperanto, work-for-world-peace-and-a-better-understanding-between-races type: in his home he is both a thinker and a clown. On his serious side he admires Teddy Roosevelt, Woodrow Wilson, and “science”; in his comic vein he goes into a dialect act that seems to derive from Artemus Ward, T. A. Daly and the most elaborate form of baby talk. The point about this man is that, though he pretends to be a pure spirit working for the betterment of mankind, he is actually a monster of egotism who drags his family down into degrading poverty, induces his wife to commit a kind of assisted suicide, drives his daughter away from home, and imposes on the other children a Freudian father-cult that strangles their budding personalities. The title sets the tone of broad irony that blares through the book: the man did not love children.

This is not the first time the unconscious hypocrite has been stripped naked. What is “original” and “extraordinary” in Miss Stead’s treatment is the fearful, disordered vindictiveness with which she pursues her character. Henrietta Pollit’s hysterical tantrums, taken by themselves, are blood-curdling; yet they never make their full impression because the novel that encloses them is like an hysterical tirade, and the reader is put in the position of the awestruck children listening in their beds to a night-long family quarrel. That this has an effect on the reader is undeniable; whether this is a literary effect is another question. At first the reader is seriously shocked and repelled; then he is moved to doubt and hot denial, and finally, like the Pollit children again, he becomes indifferent, and the author is obliged to pile up a whole heap of Gothic horrors at the end to attract his numbed attention.

The book was clearly intended to shock, but perhaps it is in a way more shocking than the author intended. For example: if you want to excite dislike for a character you will either caricature him or flay him—you will not do both at once, because the methods are incompatible; yet that is precisely what Miss Stead is trying to do, with curiously chilling results. Furthermore, though there is a compulsive circumstantiality of detail in the book, the sense of reality is feeble. The action takes place during the Roosevelt administration, when Samuel Pollit is supposed to be between thirty-eight and forty years old; yet all his taste, his slang, and his opinions date from twenty or thirty years earlier; no young New Dealer, for example, would talk about “Teddy” Roosevelt, or display such a close acquaintance with the works of Artemus Ward. There is a dislocation in time here, and there is also a dislocation in geography. Some of Miss Stead’s most strikingly squalid effects are got from the use of slang that is surely not American but British—”choc” for chocolate, “veg” for vegetables, “cawf” for coffee. In another way still, she fails to imagine her characters concretely. She makes Sam Pollit speak a frightful Artemus Ward language, yet many of the errors she pins on him are not errors at all but phonetic transcriptions of ordinary speech: why write out “my pretty made,” “dickshunaries,” “stinx,” “aneshunt” (for ancient), “bin” (for been), “two shakes of a dead lamb’s tale”? How else does anyone pronounce these words?

With its callousness, its imperfect reception (in the radio sense) of the real world, its blunt, bludgeoning manner, its outsize measurements and its enormous energy potential, this novel is a sort of mechanical monstrosity, like Electro at the World’s Fair. But it is the sort of monstrosity that is highly esteemed today when our culture (or its leaders) is feeling itself soft and puny.