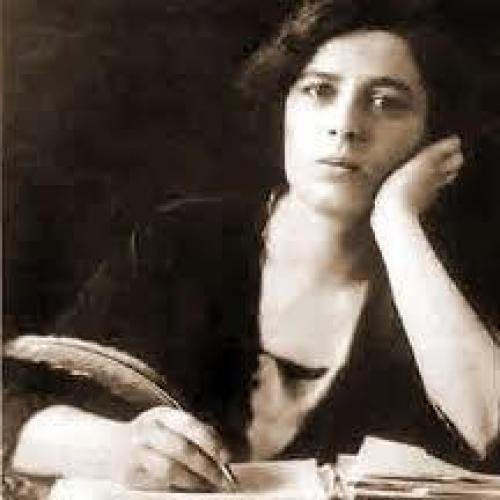 WHENSOEVER one urges upon the English Liberal or Socialist party that women have aspirations which will not be satisfied by the establishment of municipal milk depots for babies, one is met with the rebuke that Ellen Key says that this is the century of the child. And when one expostulates that this idea that the interests of the woman are equal and identical with that of the child is extremely reactionary, one is assured that Ellen Key cannot possibly be reactionary because she affirms the right to motherhood. And when one objects that women derive this right from Eve rather than from Ellen Key, one is told with unction that Ellen Key has helped nature to triumph over custom by inspiring unmarried women to have children. And when one asks why she encourages this lonely enterprise the conversation drops. It drops so invariably and completely that one comes to the conclusion that Ellen Key is one of those Great Figures, like Hegel and Lord Bryce, who have covered the globe with a respectful sense of their existence by a vast and diffused unreadability. And if one sets one’s self to read those of her works which have been made accessible by the enterprise of Messrs. Putnam, that conclusion is intensified to the point of agony.

The really remarkable feature about Ellen Key’s works lies in the fact that they mark the first appearance of the Victorian aunt as a philosopher. Every aunt-like quality flowers so luxuriantly in these books that one is prepared to swear that she crosses her manuscripts as other aunts cross their letters. At the least provocation her sentences gush into fountains of italics, and every now and then they tangle into an elaborate pattern of contradictory parentheses as though she were trying a new crochet stitch; and she shows an unerring, unhesitating inaccuracy about matters of fact. When one reads the paragraph beginning, “Ontogeny is really a new science in our century, introduced by von Leeuwenhock, de Graaf, and others. It was founded in 1827 by von Baer,” and remembers that ontogeny is not a science but a term introduced into embryology by Haeckel to denote the development of the individual organism, and that von Leeuwenhock and de Graaf worked in the late seventeenth century, and when one finds in the next sentence that she is really thinking about eugenics and biometrics, one has grasped the peculiar manner of her intellectual processes. She appears to have acquired her knowledge of economics from “Mangnall’s Questions,” and there is hardly a fallacy connected with the subject, from the idea that wages are determined solely by supply and demand to the dangerous fancy that one need only prohibit the home work of women and children to re-establish a happy home life, which is not to be found floating somewhere in this vast, dark marsh of thinking. Her style keeps for the most part on a level of glowing baldness that recalls the language of house-agents. “The young people of the lower classes when they use love’s freedom form many excellent connubial unions.” To let furnished, an excellent connubial union.

If, remembering that Ellen Key has declared herself to Europe as a great good woman-soul rather than a great good woman-brain, one averts the eye from this confused welter of mental activityand looks up at the idealism which rises fromit, one finds it entirely worthy of its intellectual basis. A suspicion that she is one of those pure but unfortunate souls to whom God reveals himself in the form of platitudes becomes a certainty when we come on the charter of the new sexual morality that is embedded in “Love and Marriage.” Here we learn that regenerated society is to regard five manifestations of sexual life as immoral. The first of these is “all parentage without love.” Humanity will not be surprised to learn that it is as well for a man and a woman to be in love before they have a child. The second is “all irresponsible parentage.” Has society needed to be told by Ellen Key that irresponsible parentage is a crime? We need only think of the numerous social organizations which exist solely to keep a check on parents who show signs of irresponsibility. Next comes “all parentage of immature or degenerate persons.” The immature do not become parents unless the capitalist system has exposed them to those bad housing conditions which force instincts into untimely growth; the ascertainably degenerate are already prevented from parentage by segregation. Then comes “all voluntary sterility of married people fitted for the mission of the race,” which has already been denounced with sufficient vigor by the Christianity which Ellen Key has abandoned because she fears that Christ, with his unaccountable silence on the subject of ontogeny, could not have grasped the “monisticevolutionary theory of life.” The charter winds up with “all such manifestations of the sexual life as involve violence and seduction, and entail unwillingness or incapacity to fulfill the mission of the race.” The first clause of this has been actively anticipated by the law, and the second is so vague that it is meaningless.

Decidedly it cannot be by these truisms, which have been the common coin of the mind of man since the beginning of civilization, that Ellen Key has won her place in the heart of the nations; there must be some new and attractive doctrine sheltering somewhere among the platitudes. Careful investigation soon lays its hands on it. But the difficulty is that it is so little a thing of reason and so much a mere pose of the personality that at first one cannot define it. Not till one comes upon Ellen Key’s definition of “eroto-plastics: the doctrine of love as a consciously formative art, instead of a blind instinct of procreation,” does one realize that what she has given the world is eroto-priggery.

No longer are love and grace and charm to be the unforced, unconscious flowerings of the soul. The female infant, inspired by the consciousness that “the essence of her value lies in her capacity to propagate the species,” is to march towards them from her cradle with an almost Prussian thoroughness and determination. At an early age she is to learn to withhold herself from all intellectual passion, lest she should fail to be “a beautiful, easily comprehended piece of nature,” in which “a man may wash himself as in a cool wave, find peace as in a silent forest.” She must, however, keep up her “universal human culture,” for “the peasant’s love, which knows nothing of caresses, comes lower in the scale of happiness than that of the cultivated person, who finds in love all the refined delights of the senses.” One can imagine the resolute young woman keeping herself fit by playing a little Mendelssohn every morning; one thinks it would be Mendelssohn. Meanwhile society is to help her towards this “enhancement of her life-values” by pulling itself to pieces with a panting urgency. “The chances of marriage might be increased by a shortening of the university course,” says Ellen Key, and one is inclined to applaud her silence on the subject of the resulting diminution in efficiency of teachers and doctors when one perceives how fervently she believes that a woman’s personality is as dust by the roadside if she misses love. “Of what avail for women to speak at ethical congresses,” she asks, “if they are unable to save even one man from the misery of being a mere fragment, if they are unable to bring harmonious unity into his life?” But if she does succeed in decorating the male existence with abstract nouns, how great is her glory! She enhances everybody’s life-values all round, she behaves with “an increasingly soulful sensuousness or an increasingly sensuous soulfulness” that somehow gives evolution a lift, and there is a general sense that in some way or other she has got the better of poor, dear, obsolete, unscientific Christianity.

This is the flower of eroto-priggery; but there is yet the fruit, which is motherhood. One does not become a mother by having a child, as one might have supposed. One gets an inkling of the difficulties of the enterprise when one reads that “there is a gulf, deep as the center of the earth, fixed between the unmarried woman who presents a child to the race and the unmarried woman who ‘has a child.’” It is like being elected to a very exclusive club with an ethical basis. To become a mother with any style one must subscribe to the maternal theory: that a woman’s life is lived most intensively and most extensively, most individually and most socially, she is for her own part most free, and for others most fruitful, most egoistic and most altruistic, most receptive and most generous, in and with the physical and psychical exercise of the function of maternity because of the conscious desire by means of this function to uplift the life of the race as well as her own life.” When we realize that this foam of words has been anticipated by every mother who has gladly borne a child and has hoped that it will be finer than the one next door, we see what a genius Ellen Key has for the truism.

The life of the new mother is to be strenuous from a material point of view. She is to have a large family; we are given to understand that the mother of four children is a mere dilettante. She is to be the nursemaid of all of them, and at the same time, since schools are alleged to be the home of “soul-murder,” she is to educate them. But an infinite reward awaits her. Her motherhood is to be to her a perpetual spiritual picnic, a warm bath of voluptuousness, an endless opportunity for enjoyable lachrymosity. “The mother should feel the same reverence for the unknown worlds in the wide-open eyes of her child that she has for the worlds which like white blossoms are sprinkled over the blue orb of heaven.” This statement, interesting as it is as a proof of how Jean Paul Richter has corrupted the Germanic style, is vitiated by the fact that we do not revere the stars. We do not go out into the back garden to revere Jupiter, but to look on its white fire. Similarly we do not revere a child but love it for the white fire of its youth. When “the new mother stands with deep veneration before the mystic depths she calls her child, a being in whom the whole life of mankind is garnered,” we may reasonably infer that the child wonders what on earth mother is up to, and probably wishes it had a mother—even one who kept a nurse and let it go to the kindergarten to meet the other little boys—who would think of it as something less reverent and more intimate than mystic depths; who wasn’t, in fact, making spiritual capital out of it.

For eroto-priggery is merely a sanctification of self-consciousness, an invitation that the heart should give hospitality to a quality usually considered disagreeable in the drawing-room, which keeps one’s powers concentrated on the task of observing and approving oneself. One can measure the folly of the doctrine by the words of Santa Teresa, who is still the greatest feminist writer the world has yet produced: in true mysticism “the faculties work without effort and without consciousness, the heart loves and does not know that it loves, the mind perceives yet does not know that it perceives. If the butterfly pauses to say to itself how prettily it is flying, the shining wings fall off, and it drops and dies. The life of the spirit is not our life, but the life of God within us.”