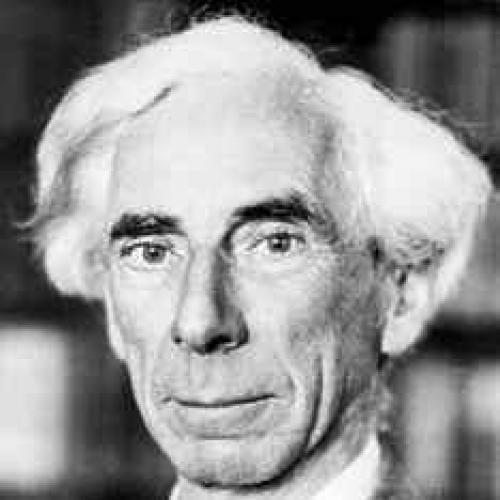 Review of The Open Mind by J. Robert Oppenheimer.

This collection of eight lectures is interesting from two different points of view. On the one hand, Dr. Oppenheimer is one of the few men who know all about nuclear weapons both from the scientific and from the governmental point of view. This gives weight to everything that he has to say on world affairs. But there is another point of view which has become important owing to the action of the authorities. Since Dr. Oppenheimer was refused security clearance his personality, his character and his outlook have become matters of public interest. I am quite unable to see how any candid person who has read this book and the evidence upon which the adverse verdict was based can fail to be convinced that that verdict was mistaken and resulted (to take the most favorable hypothesis) from a lack of comprehension of a very sensitive character accustomed, as all men of science should be, to the balancing of conflicting hypotheses. A policeman may say: “We do not want men who balance hypotheses. We want men of firm and unshakable convictions on the side of the Right. The open mind, forsooth! Can it be a virtue to have an open mind between right and wrong?” This outlook is common, and in a police force perhaps inevitable, but it is not that of men who are successful in scientific investigation. If the authorities insist upon employing only those whose orthodoxy is more impeccable than that of simpler men in the scientific preparation of nuclear weapons, they will do infinite damage to their country by excluding all men of first-rate scientific ability.

So much by way of generalities. To come to the particular case of Dr. Oppenheimer: Investigation made it undeniable that he has committed mistakes, one of them from a security point of view rather grave. But there was no evidence of disloyalty or of anything that could be considered treasonable. Such errors of judgment as there were resulted from an inability to see things simply, an inability which is not surprising in one possessed of a complex and delicate mental apparatus. He suffers, as all sensitive atomic scientists do, from the unintended horrors which their work has rendered possible. As he says: “In some sort of crude sense which no vulgarity, no humor, no overstatement can quite extinguish, the physicists have known sin; and this is a knowledge which they cannot lose.” He speaks of “the deep trouble and moral concern which so many of us who are physicists have felt.” I do not see how any humane person engaged in the kind of work which Dr. Oppenheimer was doing could fail to have such feelings. I do not mean to suggest that the work ought not to have been done. The scientists were caught in a tragic dilemma, and even the most conscientious of them might justly feel that no good could come of an individual or unilateral refusal to engage in the researches that governments demanded. But it is not difficult to understand how, in moments when intricate political arguments were forgotten, the sense of sin of which Dr. Oppenheimer speaks would return. It is a shocking thing that policemen, who have no such sense, should be considered morally superior to those who have it.

The development of Dr. Oppenheimer’s own opinions is perfectly clear. Like many others of liberal outlook he had when young hopes that it might be possible to co-operate with the Soviet Government. These hopes gradually faded and finally died at the time of the Russian rejection of the Baruch Plan. A propos of this, he says: “Openness, friendliness and co-operation did not seem to be what the Soviet Government most prized on this earth. … We came to grips, or began to come to grips, with the massive evidences of Soviet hostility.” From these and many other passages it is clear that Dr. Oppenheimer’s attitude to Russia had become all that the American authorities could wish.

But he has been aware at an earlier date than the leading statesmen of the world that modern weapons have made a great deal of past military thought completely inapplicable. It is no longer useful to possess more bombs than the enemy if each side possesses enough to inflict total disaster. As Dr. Oppenheimer puts it: “Our twenty-thousandth bomb, useful as it may be in filling the vast munitions pipe-lines of a great war, will not in any deep strategic sense offset their two-thousandth.” I think that the Big Four at Geneva understood this situation, but there is still a feeling in many quarters that it is not quite nice to be frank about it.

Dr. Oppenheimer’s opinions on world affairs are temperately expressed and, to my mind at least, are just and wise. He is quite clear that there is only one ultimate solution for our problem, and that is World Government: “Many have said that without World Government there could be no permanent peace, and without peace there would be atomic warfare. I think one must agree with this.” He goes on to say that to outlaw atomic weapons will only be possible if international law can apply to the citizens of nations, and that international control is not compatible with absolute national sovereignty. But he admits, fully and frankly, that there is little hope of international government in any near future. For the near future his hopes are directed mainly towards a diminution of secrecy and suspicion, and an increase of friendly intercourse. But he realizes that it may be a long time before such palliatives bring about any fundamental improvement.

There is an interesting address on the encouragement of science, in which he points out, as many others have done, that it lies within the power of science to abolish poverty everywhere. “Science can provide us,” he says, “for the first time in history, with the means of abating hunger for everyone on earth.” While urging the importance of preserving peace, he refuses to admit that it has become the one absolute final objective of all political decisions. “There are,” he says, “other things in man’s life—his freedom, his decency, his sense of right and wrong—that cannot so lightly be subjected to a single end.” I think the feeling which led him to say this is a right one. Subordination of all other ends to one is the essence of fanaticism and involves a quite undue simplification. But there is something new in our present problem: Freedom and decency and sense of right and wrong will disappear along with all other human values if human life is exterminated. All human values depend upon the continued existence of the human species, and this aim must therefore dominate all others.

In spite of nuclear weapons, Dr. Oppenheimer is a firm believer in the value of science, but he is not certain that science will survive. He says: “It is possible, manifestly, for society so to arrange things that there is no science. The Nazis made a good start in that direction; maybe the Communists will achieve it; and there is not one of us free of the worry that this flourishing tree may someday not be alive any more.” I cannot myself believe that science is likely to decay in a world in which scientific war is possible. Unless all civilization collapses nations will continue to value science so long as, without actual war, the danger of war persists. We must hope that if peace became secure science would again be valued as it used to be for better reasons than the ability to inflict larger-scale slaughter.

There is an interesting lecture called “Scientists in Society.” Dr. Oppenheimer is struck by the incredible scientific ignorance of historians, statesmen and men of affairs. He poses, without solving, a curious problem of the modern world. The men whose activities have been transforming human life are the men of science, but it is not they who have power in the sense of being able to give orders. Statesmen, captains of industry, generals, bureaucrats, and clerics can determine what shall be done, but the means of doing it are supplied by science, of which these eminent men understand nothing. The scientist is in the position of a Greek slave in Imperial Rome. He knows that he understands a host of important things which are completely unknown to his masters. This gives him a very painful feeling of isolation in the community. Perhaps in time it will become possible to make some of the fundamental ideas of science intelligible in the course of a cultural education and, conversely, to give more cultural background to the thoughts of scientists. The present system under which some men have the power and others have the knowledge is very dangerous. If it could be amended by a lesser degree of specialization in education, the risk of disaster to civilized ways of life might be much lessened. Physicists have learnt to think in quite a new way about many matters as to which most people still unshakably adhere to common sense. Dr. Oppenheimer points out that matter no longer consists of persistent particles and that the whole way of conceiving the physical world is totally different from that of half a century ago. “The science of today,” he says, “is subtler, richer, more relevant to man’s life and more useful to man’s dignity than the science which had such great effect on the Age of Enlightenment. … Quantum mechanics represents a more interesting, more instructive, richer analogy of human life than Newtonian mechanics could conceivably be.” It is infinitely regrettable that this new universe of revolutionary ideas, which ought to be transforming our everyday thoughts, is as yet so entangled in technicalities that very few can apprehend it, and so bound up with what is most dreadful in our civilization that many men shrink from it in horror. It is not only material benefits that science can bring, but also fundamental new insights and new fields for creative imagination. All this, no doubt, it will achieve in time if peace endures. There is more that is worth preserving than at any earlier time. It is not irrational to hope, though it would be-irrational to feel sure, that this great heritage will not be swept away in a moment of madness.