You are using an outdated browser.
Please upgrade your browser
and improve your visit to our site.
Skip Navigation
Yes, the Russians will feel it. 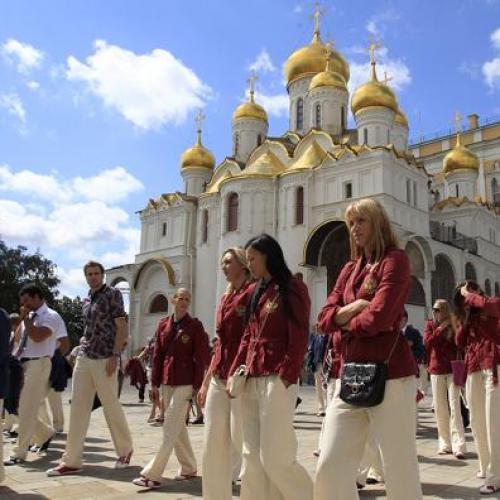 The decision to invite the Olympics to Moscow was a serious gamble for Leonid Brezhnev. Even within the Soviet Union he stood vulnerable to ridicule because of the games. One joke circulating in Moscow last year depicted Brezhnev's opening speech at the 1980 ceremonies. Brezhnev, while reading a letter of greetings from the International Olympic Committee, trips over the Olympic symbol in the letter's masthead and begins pronouncing the five rings. "Ladies and gentlemen," Brezhnev begins, "O . . . O . . . O . . . O . . . O . . . . "

Hearing that joke in Moscow last year, I thought not only of Brezhnev's slurred speech and droll delivery but also of the difficult transition experienced by Soviet society in the years of detente. The Olympics seemed a further test of the Kremlin's ability to tolerate the influx of Western influences without yielding to political liberalization.  For many Americans in Moscow (including me), it seemed doubtful that Moscow could survive the pressures of the crushing tourist wave next summer. The black market would be flooded with bluejeans and records, foreigners would go home forever disillusioned by Soviet inefficiency, and the police organs would try vainly to contain the growing ferment in Soviet society.

Now the Soviet invasion of Afghanistan has changed everything. The crush of tourists may never arrive in Moscow, now that President Carter has moved to punish the Politburo for its aggression. The central question prompted by the debate over the Olympics is whether the Politburo will be substantially damaged by the boycott, or whether our refusal to attend the Olympics will serve merely as a symbolic gesture. It is unlikely that any American action, short of the use of military force, would compel a Red Army retreat from Kabul. What purpose, then, would the boycott serve?

In the last few weeks, voices have been raised to challenge the wisdom of the boycott strategy. Recently in the New York Times ("A Boon for the K.G.B.," January 31, 1980), Harrison Salisbury reminded readers of the potential headaches the hordes of Western tourists to Moscow would cause Soviet officials. Attempting to punish the Politburo, Salisbury writes, we will only ease the job of the KGB by relieving the city of the flood of thousands of foreign tourists. By our decision to boycott the Olympics, we will only help forces on the right in the Politburo gain the upper hand. No longer can thousands of Russians expect to mingle with Westerners "laden with capitalist fruits." No longer must Iurii Andropov, chief of the KGB, worry about the danger of Russians sampling Western literature, ideas, philosophy, and even (Salisbury adds for some bizarre reason) cocaine. In the end, Salisbury implied, we will only be serving the interests of the Kremlin hardliners responsible for the Afghanistan intervention.

I think Mr. Salisbury is wrong, for a variety of reasons. His remarks, however, do articulate the seriously flawed US assumption over the last decade that Soviet society would become westernized as the result of its expanded ties with the United States. As observers in the Soviet Union readily saw, we were wrong to expect moderate tendencies to grow from detente. Paradoxically, as the Soviet Union has eased its tensions with the West, it has tightened its controls over society. Although some say that President Carter's moves to punish the Kremlin for its actions in Afghanistan will only provoke reaction within Russia, the history of the Brezhnev administration shows that right-wing elements in the Politburo already have held the upper hand throughout the last decade. Even before Afghanistan and the exile of Sakharov, the banishment of Solzhenitsyn, the closing of the Chronicle of Current Events, andthe arrests of Scharansky and Orlov indicated that the regime was not about to allow Western influence to get out of hand in Moscow. The Politburo's autumn decree ordering school-age children out of the city for the summer further displayed the assumption of the Soviet leaders that they can cope with the implicit dangers of the Olympics.

My contact with Russian friends last year convinced me of the flawed logic behind our faith in the liberalization of Soviet society. In Moscow the only result of increased exposure to the West was height- ened cynicism toward the Soviet system. Sure, many Russians now wear bluejeans and listen to weak versions of Western rock'n'roll. But they also happily adjust their superficial W estern lifestyles to the demands of being loyal Komsomol or party members. When I asked them about the dangers of holding the Olympics in Moscow, they scoffed at the idea that the Soviet police could not cope with the flood of tourists. "They'll just hire that many more agents. Whatever is needed to keep things under control, they'll do it."

All this was clear before the December events in Afghanistan. Now the question is how to make the Politburo pay for its aggression. Besides the obvious damage a boycott would cause the Kremlin—the blow to the prestige of the regime and the tremendous loss of expected hard currency from tourism—there is another, more complicated reason why the Politburo stands to suffer damage from the Olympics boycott: the existing economic squeeze on Russian families, a squeeze that has been tightened recently because of preparation for the summer games.

The years of detente, certainly a time of increased contact with Western culture and ideas, also represented a period of rising expectations for Soviet consumers. Though Soviet living standards still lag far behind American standards, the 1970s were years of material progress. Cars now crowd Moscow's streets, electronic calculators can be seen in Soviet offices, and a greater variety of clothes and appliances can be found in Soviet stores. Yet despite all these improvements, Soviet consumers always have had to survive in a “deficit” (defitsitnoe) economy. Shortages and inefficiency have always marked the Soviet consumer system, but the years of preparation for the Olympics have made things worse.

Throughout the last year, Muscovites have used the Olympics as a scapegoat for their economic ills. Rumors about state hoarding for the summer visitors helped explain away the shortcomings inherent within the Soviet economy. When Russians apologized for the smallness of their homes or for the difficulty of finding meat in stores, they pointed to the Olympics as the reason for shortages in the economy. “We can’t afford to pay for new apartment buildings until after the Olympics,” they explained. Vsio na Olimpiadu! “Everything for the Olympics!” complained discontented Muscovites.

Critics of the grain embargo and Olympics boycott assume that Russian society can withstand any deprivation without losing its loyalty to the regime. Yet historically, shortages of food, especially at times of international humiliation, have dealt crippling blows to Russian regimes—witness the effects of the Crimean War, 1905, or 1917. In 1970 the Politburo bowed to the pressure of food rioting in Poland when it yielded to a change of government. The threat of food shortages is a matter of concern to the Kremlin, as was evident last year when rumors circulated in Moscow that factory workers in the city of Gorki (where the exiled Sakharov now lives) refused to vote in the annual election until the government brought meat to the city. For the week before and after the election, the Russian staple meats kolbasa (sausage) and hotdogs were sold in that Volga city. Moscow and Leningrad are the only Soviet cities with a reliable meat supply—that is, before the grain embargo. Throughout my year in Moscow, I would meet provincial visitors in the homes of Muscovite friends, visitors from Kalinin, Volgograd, and even Siberia who had come to buy meat in the capital. Soon kolbasa may become unavailable even in Moscow.

The Politburo now faces the prospect of a sharp reduction in the Russian meat supply in tandem with the international humiliation of an Olympics boycott. After sacrificing so much to make the Olympcis possible, Russian citizens may begin to question the wisdom of their government's actions in Afghanistan once they witness a stillborn summer Olympics, To the millions of average Russians who hardly would have been touched by the flood of Western influence, the economic pressures of the boycott and the grain embargo will have far greater meaning than a successful Olympics could achieve. Precisely now, after a decade of rising consumer expectations, the twin blows of the embargo and the boycott will hit the population hard. The Olympics boycott will not only deprive the Soviet system of vital hard currency obtained through the tourist trade, but also exacerbate tensions aroused by shortages of food and housing. In the last two or three years Soviet citizens have sacrificed to see millions of rubles poured into construction of tourist hotels and Olympics facilities. To know that this money has gone to waste because of the government's reckless commitment to defend the Afghanistan revolution is a thought more damaging to Andropov's KGB than any superficial exposure to Westerners could ever be. When the Red Army coffins begin to be airlifted back to Moscow from Kabul, the ordinary Russian may become much more impatient with the Politburo's sense of "duty" to defend foreign revolution.

Robert Herr is the pseudonym of a Russian specialist who recently spent a year in the Soviet Union. This article appeared in the February 16, 1980 issue of the magazine.