The sad story of an artist’s success. 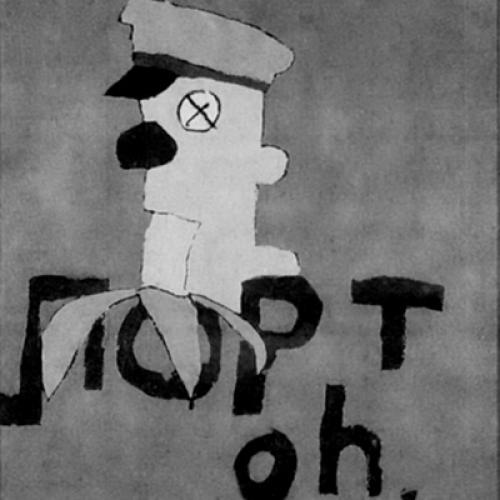 A few years ago, an art teacher at Cooper Union in New York showed me the results of a computer survey designed to establish which artists the incoming class of freshmen had heard of. They did not have to describe a work, let alone to discuss it; only to name names. Picasso, as one might expect, topped the list with 61 mentions. Right under him were Michelangelo and van Gogh, with 54; Rembrandt, with 53; and Monet, with 50. The curiosities began lower down. Andy Warhol scored 33, Watteau 1. And Jean-Michel Basquiat, not much older than the freshmen themselves, was recognized by as many of them as Tintoretto and Giacometti; by five times more than Nicholas Poussin or William Blake.

If any artist may be said to have parodied, not just illustrated, the contemporary-art boom of the 1980s, he was Jean-Michel Basquiat, who died of heroin in New York last August at the age of 27. Basquiat was living proof, and not only for the freshmen at Cooper Union, that one could make it straight out of the egg—no waiting. One marveled at such innocence. For the truth about this prodigy was rather less edifying. It was a tale of a small, untrained talent caught in the buzz saw of artworld promotion, absurdly overrated by dealers, collectors, and, no doubt to their future embarrassment, by critics.

This was partly because Basquiat was black. The otherwise monochrome Late American Art Industry felt a need to refresh itself with a touch of the “primitive.” There were infinitely better artists than Basquiat who happened to be black, such as the sculptor Martin Puryear, but they did not have to contend with this kind of boom-and-bust success. One would not call it luck; at least not the luck a sane talent would envy. For the very nature of Basquiat’s success forced him to repeat himself without a chance of development.

Jean-Michel Basquiat first appeared around 1980 as half of a two-man street-artist team, leaving gnomic graffiti in neat block letters around lower New York under the tag SAMO, which was an acronym for “Same Old Shit.” (The “work” on my building in Prince Street read, “SAMO as an antidote to nouveau-wavo bullshit.” It was a claim not without its retrospective ironies.) You couldn’t call SAMO a master of aphorism, but his stuff read a little more snappily than most of the spraying and paintpissing on downtown walls: needling, discontented, detached.

Likewise, Basquiat’s paintings, when they appeared in 1981 at P.S. 1, in a sprawling survey called “New York/New Wave,” were clearly better than the common run of graffiti art. Though he had dropped out of high school and scarcely set foot in an art school, Basquiat had an instinct for putting things—words, masks, marks, disconnected phrases—on canvas with space between them (rather than just scribbling and void-filling, edge to edge, like most of his street colleagues). This, coupled with his coarse but zappy line, suggested a seed of unformed talent. His use of color was rudimentary and schematic. However desultorily, Basquiat had looked at some museum art—mainly Dubuffets and Picassos, from which his “primitive” conventions were gleaned.

In a saner culture than this one, the 20-year-old Basquiat might have gone off to four years of boot camp in art school, learned some real drawing abilities (as distinct from the pseudo-convulsive notation that was his trademark), and in general, acquired some of the disciplines and skills without which good art cannot be made. But these were the 1980s. And so he became a star.

Graffiti were in fashion in the early ‘80s, and collectors were ready for a wild child, a curiosity, an urban noble savage—art’s answer, perhaps, to the Wolf Boy of Aveyron. Basquiat played the role to the hilt. He had enough distance from it to carry it convincingly, for a time: far from being a street kid, he was in fact an upper-middle-class, private-school boy of Haitian parentage, whose father owned a four-story brownstone in Brooklyn and drove a Mercedes. By 1985, the peak of his career, when he made the cover of the New York Times Magazine, his larger paintings were going for $25,000 in the galleries, and sometimes for more at auction.

Deeply wounded by a rift with his father, Basquiat seems to have fixed on celebrity as a substitute for parental esteem. For the last few years of his life, his mentor was the late Andy Warhol. He made worthless “collaborative” paintings with Warhol, lived in Warhol’s spare studio on Great Jones Street in downtown Manhattan, and seems to have accepted Warhol as a surrogate father—along with the pale rider’s own values about art, money, and fame. It was not the best of humidicribs for an infant artist; but Warhol’s friendship certainly kept Basquiat going for a while. What finished him off, after Warhol died, was drugs.

Like most junkies, Basquiat thought he was invulnerable. To feed the monkey, he had to crank out paintings by the hundred. Wired, he lost whatever capacity for aesthetic reflection he might have had. The result was a run of slapdash pictorial formulas, whose muchdiscussed “spontaneity” and “energy” were mostly feigned. Far from being the Charlie Parker of SoHo (which was what his promoters claimed), he became its Jessica Savitch.

Basquiat was not ideally lucky in his choice of representatives. His social groom was Henry “Freebie” Geldzahler, who had failed long ago as a writer, curator, and historian, but still wielded influence as a tipster, at least among new collectors. His first dealer, Annina Nosei, kept him in the basement of her gallery turning out canvases (now esteemed as “early Basquiats,” to distinguish them from the less sought-after “late Basquiats” of three years later), which she sold before they were dry and sometimes before they were finished. Her successor, for a time, was a disturbed Iranian sleazeball name Tony Shafrazi, who in the ‘70s had vandalized Picasso’s Guernica in the Museum of Modern Art by spraying the words “KILL LIES ALL” across it in red. (For some reason the trustees of MOMA chose not to prosecute Shafrazi; he soon re-emerged as a prosperous dealer in graffiti art, a dazzling act of chutzpah.) But Basquiat’s unreliability, and his need for the drug money, prevented him from staying long with anyone—certainly not long enough to rig a safety net. When he died, about 35 dealers were said to have been holding a stake in him.

Basquiat’s career appealed to a cluster of toxic vulgarities. First, to the racist idea of the black as naif or as rhythmic innocent, and to the idea of the black artist as “instinctual,” outside “mainstream” culture, and therefore not to be judged by it: a wild pet for the recently cultivated white. Second, to a fetish about the infallible freshness of youth, blooming amid the discos of the Downtown Scene. Third, to an obsession with novelty—the husk of what used to be called the avant-garde, now only serving the need for new ephemeral models each year to stoke the market- Fourth, to the slide of art criticism into promotion, and of art into fashion. Fifth, to the jrt-investment mania, which abolished the time for reflection on a “hot” artist’s actual merits; never were critics and collectors more scared of missing tbe bus than in the early ‘80s. And sixtb, to tbe audience’s goggling appetite for self-destructive talent (Pollock, Hendrix, Montgomery Clift). All this gunk rolled into a sticky ball around Basquiat’s tiny talent and produced a reputation.

THE REPUTATION may survive, or it may not. If it does, it will only slow once more, as if further proof were needed, that a perch in the pantheon of the 1980s does not necessarily depend on merit. Basquiat’s stardom was waning badly when he died, because the fashion that had raised him up was already tired of him. The urban graffiti movement that Basquiat had used as a conduit in 1981-83 had no fans left among collectors five years later. Moreover, the “adventurous” collectors who had bought his work in the beginning were now into Neo-geo; the hot young artist with bis dreadlocks bad been thrust aside by the cool one with his paperback Baudrillard.

But now we have a gush of posthumous Basquiat hype—a codicil, as it were, to the media overkill that surrounded the auction of his mentor Warhol’s chairs and cookie jars last spring. There are so many Basquiats floating out there that the only possible strategy for maintaining their value is to romanticize their autbor, loudly claiming bim as a potentially “major” artist, a genius cut off in his first flower.

The New York Times, as one might expect, festooned his bier in column inches. “Martyr Without a Cause,” ran Peter Schjeldahl’s beadline in 7 Days, treating Basquiat as a veritable St. Sebastian, bristling with syringes flung cruelly by the Zeitgeist. Comparing him to “a soft young African prince, imperious and wistful,” Schjeldahl invoked Cy Twombly and Franz Kline, claimed that Basquiat, like them, “seemed incapable of moving his hand in a way that was uninteresting.” Schjeldahl called for “a proper retrospective of his work.” Doubtless he will get his wish, given the Whitney Museum’s helpless commitment to the trendy and the number of its financial supporters who have been left holding Basquiats whose price needs to be sustained by tbat “proper retrospective.” Then the Museum of Contemporary Art in Los Angeles could do it too, because its trustees own lots of Basquiats as well. This is known as Postmodernist Museum Ethics. It’s how art history gets made, bub.

Then, in Vanity Fair, Anthony Haden-Guest got worked up about “the brilliant, intense life of a most remarkable artist—America’s first truly important black painter,” as though Jacob Lawrence and others whose brushes Basquiat was scarcely qualified to clean had never lived. And in New York magazine, Phoebe Hoban weighed in with a piece to rival Julie Baumgold’s treatment of the fraud Arianna Stassinopoulos Huffington three months before; nine full pages of heavy breathing on Basquiat. It was stuffed with exequies, mainly from dealers, though relieved by such flashes of comedy as a cameo appearance by René Ricard of Artforum. “Ricard is hysterical....He says the bottle of cbampagne he planned to pour on Basquiat’s grave has exploded.” “Jean-Michel was touched by God,” Ricard raves. “He was a black saint. There was Martin Lutber King, Hagar, Muhammad Ali, and Jean-Michel.” There spoke the voice of critical detachment, ‘80s-style.

The only thing that brought Basquiat back into the spotlight was bis death. Schjeldahl waxed indignant at some unnamed shrugger who wondered, “What else could he have done?” The remark was an appropriation of the famous line about Elvis Presley’s death, that it was a shrewd career move. The difference is that, whereas rock ‘n’ roll would be immeasurably the poorer without EIvis, Basquiat never looked like he was turning into a painter of real quality. His “importance” was merely that of a symptom; it signifies little more than the hysteria of instant reputation that still so grotesquely afflicts American taste. His admirers are like a posse of right-to-lifers, adoring the fetus of a talent and rhapsodizing about what a great man it might have become if only it had lived. Apparently Neo-Expressionism has at last found its Thomas Chatterton—Wordsworth’s “marvellous boy,” the fame-struck baby poetaster whose name, thanks to his suicide at 18, lives on, while his work remains wholly unread.

This article appeared in the November 21, 1988 issue of the magazine.