Quite soon in watching Ida, you recognize that you are going to have to see the picture again and again. It intends to live with you. For it has a simplicity that is crammed and so concentrated, you are feeling drained. We are not used to watching so closely, or with a spirit we may have forgotten. It is like seeing Carl Dreyer’s The Passion of Joan of Arc for the first time.

In the drab interior wasteland of Poland in 1962, a young woman, Anna, is close to taking her vows as a nun. Not that she knows the mood is drab—she has never been anywhere else. She was an orphan taken in by the convent. The Mother Superior calls Anna and tells her she has one relative, not mentioned before, an aunt. The Church wrote to the aunt, asking her to take care of Anna. But she said it was not convenient—and no one has ever told Anna.

How this matter has not arisen before is not clear or explained, and it seems odder in that the aunt was once a significant public prosecutor under the communists. “They called me ‘Red Wanda,’ ” she tells her niece, proud of the severity, but haunted. She sent a few people to their deaths, she says. There is a hardness in her face, like someone looking in a mirror and refusing to crack. She is still a local magistrate, but if her stature has slipped, it may be because she drinks, leads a casual sex life, and no longer believes in the old orthodoxies. Not much is left to her but cigarettes, Mozart, the light at a window, and this lost niece. Anna travels to see Wanda, wearing her training habit, and the aunt tells the girl that she is Jewish. Her real name is Ida. Her parents were almost certainly murdered during the war. Will she still take her vows? 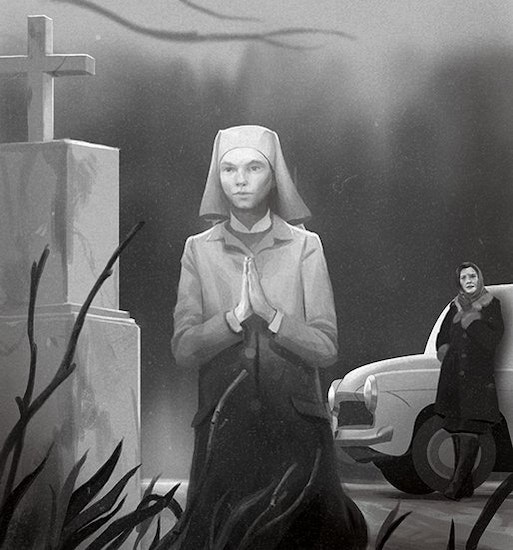 So Ida is a picture about naïve certainty, suddenly afflicted with doubts. That seems to be the warning, or the training, in the abrasively lustrous photography by Lukasz Zal and Ryszard Lenczewski. The film is shot in black and white in a classical Academy format, a 1:1.37 screen ratio that can look square to viewers not used to it (until they learn to feel its radical beauty). In fact, it is the way most films were once shot, and most Polish films in 1962. But the format is as loaded as a gun. It seems primed with significance. And so as the picture develops, we find a number of very pronounced, decisive compositions, with faces set off-center, but in a deliberately arresting position. When the girl first meets her aunt, the door where she appears is off to one side and the vortex of banister railings points accusingly at her door. Such compositions are premeditated and ready for judgment.

At the same time, the narrative action can be just as deliberately arranged so that the composition stays enigmatic. When aunt and niece go to a town to explore the past, there is a signal shot of the aunt in a bar, drinking, with the listless street in the window behind her. The barman is off-screen to one side; and in the other direction there is another man, for whom she buys a drink but who stays unseen for some time. The aunt sits there, in profile with a fur collar, the center of attention in the indifferent town, drinking, at the tag end of her attractiveness and her hope. And the controlled nature of the shot lets us know she is losing control. It is impressive and yet not too far from being mannered, but then just as the measure of the framing seems heavy, the film picks up an elliptical turn, daring to omit essential actions because they have been delivered indirectly. By the end of the movie, enormous things come and go like a breeze.

The title suggests a story about the novice facing a crisis, but this is as much a film about the aunt, worldlier to be sure but lacking Ida’s spiritual strength. So while we think at first that the aunt has initiated a test of her niece and a way of deterring her from her vows, she is herself the pivotal subject of scrutiny—as witness a shot of her smoking, sitting in her bath, damp from the steam but seeming to dissolve before our eyes. She is photographed as a tormented face, while Ida is a pensive icon. The relationship between the two is worthy of the Bresson of Diary of a Country Priest, and far more intense than the simple plot outline of what is only an eighty-minute film. The actresses are Agata Kulesza (the aunt) and Agata Trzebuchowska (the niece): the life of the movie is in these two faces, so that it seems trite to praise the acting. With their director, they have arrived at an understanding of the facts of the case and the surviving mystery in it.

Ida has been around for some time—long enough to make us wonder what has held it up. It premiered in this country at Telluride in 2013, and it then played in Toronto and at the London Film Festival, where it won the prize for best film. For Paweł Pawlikowski, its director, Ida marks a return to Poland. He was born there in 1957, but at fourteen he was taken away to live in the West. Over the years, while teaching sometimes at the National Film School in England, he has built a career, first in documentary and then, gradually, in feature films. Last Resort (2000) concerned a Russian woman seeking asylum in Britain. My Summer of Love (2004) was an unusual encounter between two women from utterly different class backgrounds, played by Emily Blunt and Natalie Press. And the most recent, The Woman in the Fifth, from a novel by Douglas Kennedy, is about an unstable writer (Ethan Hawke) who goes to live in Paris and has a watchman’s job through which he sees and becomes obsessed by a mysterious woman (played by Kristin Scott Thomas).

If it is hard to find a recurring pattern in these films, the best chance may be to settle for situations where a deep existential mystery waits behind a surface enigma. These movies do not settle conclusively, and Ida leaves us hanging and uncertain, just as we may worry about some plot points the more we think about them. Was the aunt an innocent bystander in what happened during the war? No, not so; there is so little innocence left. Wanda is a ruined soul, and if at first she seems intent on testing Anna’s faith, then another strain emerges—that Ida has arrived to rescue Wanda from damnation.

This may sound like a grim, merciless progress, but Pawlikowski has balanced the spiritual horror with scenes of lyrical elevation. I’m not sure if any film has so condensed the terrible ways in which Catholics treated Jews in Poland out of devoutness. We see criminals who have found their own agony in reliving their crimes, and it is characteristic of Pawlikowski that, instead of showing murder, he attends to the faces of those recollecting the evil. We easily understand why Wanda should have diverted her tragedy into anger, revenge, and the hope that the world might be remade.

Along the way, aunt and niece give a lift to a young jazz musician, an archetypal Polish figure from the early 1960s. He plays alto sax—a very male, sensuous instrument, observes Wanda. She dances the night away to his music with various men, but it is Ida who takes off her habit and discovers what she will be giving up in her vows. These love scenes occur in a provincial hotel like the one in Andrzej Wajda’s Ashes and Diamonds. They use John Coltrane and they spell out the young man’s realization that Ida has no idea of the effect she has on people. To that extent she is Anna, still.

One hears that Pawlikowski may do more work in Poland, and it raises the question of where this film stands in Polish film history. There have been admirable surveys recently of Polish cinema, and there is a lot to be dealt with—not just the Polish wanderer Roman Polanski or the  Andrzej Wajda who will always be identified with the country’s chronicle of itself in the twentieth century. But then there are Andrzej Munk, Krzysztof Zanussi, and Jerzy Skolimowski, and the remarkable careers of Krzysztof Kieślowski and Agnieszka Holland. Still, I reckon that only a handful of previous Polish films are in the same class as Ida. This is a picture that leaves us amazed at such startling discoveries as black and white, the Academy rectangle, the human face, and the assumption that the historical travails of a nation have to be dealt with in its cinema.

David Thomson is the film critic for The New Republic and the author, most recently, of The New Biographical Dictionary of Film: Sixth Edition (Knopf).