Immediately before the presidential election in 2012, Fox News viewers were certain of one thing: Mitt Romney was going to win. It didn’t matter that poll after poll had President Barack Obama winning by a comfortable margin. Conservative pundits Michael Barone, George Will and Dick Morris all expected Romney to earn more than 300 electoral votes. Even after Obama's victory was certain on election night, Karl Rove wouldn't admit defeat.

For those of us reading Nate Silver and other election forecasters, those conservative predictions were laughably bad. And election night proved us correct: Obama won with 332 electoral votes. The millions of Republicans who were shocked and disappointed on election night were not let down by their hubris, although it undoubtedly played a role. The real fault lies with conservative media system, which had become an echo chamber of right wing talking points that did not reflect the national landscape.

In the aftermath of Obama’s reelection, smart conservatives argued that the right wing media was putting their party at a disadvantage by obscuring the truth. “You haven't just been misinformed about the horse race,” the Atlantic’s Conor Friedersdorf wrote. “Since the very beginning of the election cycle, conservative media has been failing you.” While Friedersdorf hoped the shellacking would be an awakening for the party, he doubted it would be. Nineteen months later, Friedersdorf is looking prophetic: A new Brookings and Public Religion Research Institute poll shows just how out of touch Fox News viewers are with both their fellow Republicans and the rest of the country. They learned nothing from 2012.

The Brookings/PRRI report surveyed 1,538 adults focused on immigration reform, but also included questions on their news preferences and a collection of other policy issues. The focus on new preferences allowed the researchers to divide the Republican respondents into two groups: those that most trust Fox News “to provide accurate information about politics and current events” and those that most trust a different network. The former, whom the authors label “Fox News Republicans,” made up 53 percent of Republican respondents. “Non-Fox News Republicans” made up the remaining 47 percent. This was an easy split to make, but for Democrats there was no clear divide on news preferences. Thirty one percent of Democrats most trusted broadcast news stations (ABC, NBC, and CBS) while another 26 percent chose CNN. Smaller percentages chose public television (14 percent), MSNBC (10 percent) and the Daily Show with Jon Stewart (9 percent). 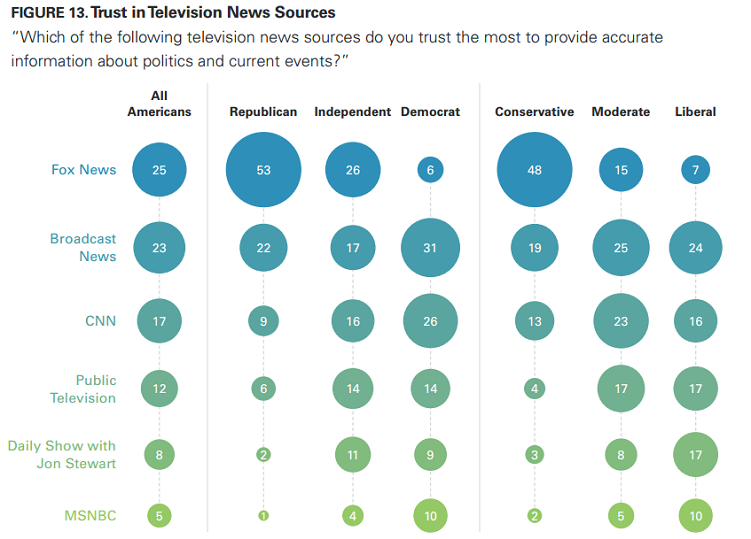 In other words, the Republican Party is extremely polarized among its news choices while the Democratic Party is scattered among a number of networks. 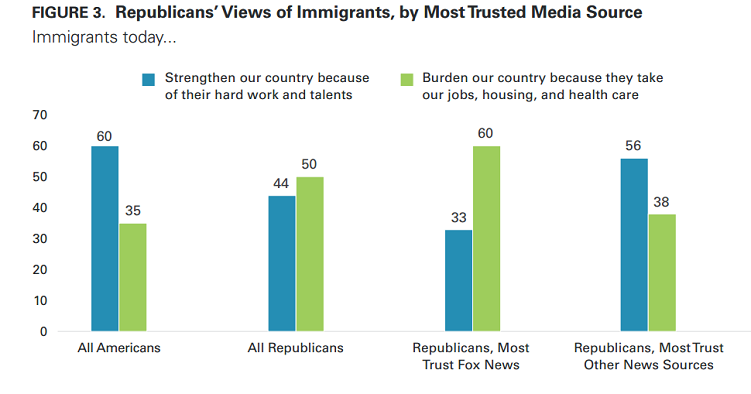 That makes Fox News the home of the Republican Party’s most conservative members. But those members would have found a home somewhere. It’s telling that they have done so at the Republican Party’s preeminent media source, but it does not disqualify the network from delivering factually correct news. Except the Brookings/PRRI survey also finds that Fox News Republicans are the most uninformed on immigration issues as well. Sixty four percent of Fox News Republicans wrongly believe that illegal immigration has increased during the past few years. Adults who most trust the broadcast stations do not excel at that question either: 46 percent believe that illegal immigration has increased. But that’s much better than Fox News viewers.

That doesn’t mean Fox News is at fault for their viewers’ ignorance. It’s impossible to determine causality from this survey. Fox News may attract extremely conservative viewers or it may make conservative viewers more extreme. It’s likely a combination of the two. “It is not possible from this data to offer a precise solution to the chicken-and-egg question — whether the more important fact is that those with very conservative views are already attracted to Fox or whether Fox turns its viewers into conservatives,” the authors write. “What is clear is that conservative are drawn to Fox, and that Fox may, in turn, reinforce and perhaps harden conservative views.”

Those hardened views are at odds not only with the rest of America, but also with the remaining 47 percent of the Republican Party who trust other news sources. In turn, Fox News viewers receive a warped view of the political landscape. They—and Republican congressmen—may not consider Fox News an extreme news source. They may think it represents the center of the GOP. Under that mindset, presidential candidates should adopt a policy platform that appeals to the average Fox News viewer. But that’s a mistake when the average Fox News member is an extreme conservative. Instead of adopting a position that can garner support from the entire political spectrum of the Republican Party, they have chosen one that turns off moderate Republicans and appeals directly to extreme conservatives. Those moderate Republicans may ultimately vote for the GOP, but this strategy almost certainly alienates independent voters.

This makes the Fox News echo chamber a hazard for the party. It creates extreme candidates under the guise that they are electable, builds up a false narrative that they are in fact electable and then acts surprised when that narrative doesn’t play itself out. In 2012, this storyline was on full display. In the aftermath of that defeat, Fox and the Republican Party had the chance to fix it by reorganizing the station’s content with more moderate hosts and more accurate coverage. They have chosen not to do so—and it’s only going to continue to hurt them in 2016.

Danny Vinik is a former staff writer at The New Republic.