Naturalist writer Theodore Dreiser was born on August 27, 1871. He reviewed English author Ford Madox Ford's The Good Soldier, a novel defined by its unreliable narrator and unconventional, non-chronological approach to storytelling. Dreiser takes issue with these very characterists, writing of the novel, "The interlacings, the cross references, the re-re-references to all sorts of things which subsequently are told somewhere in full, irritate one to the point of one’s laying down the book. ...I doubt whether even the lover of naturalism—entirely free of conventional prejudice—would go on."

Captain Edward Ashburnbam, heir of a wealthy  British family, is wedded for reasons of family  courtesy to Leonora Powys, the daughter of financially  embarrassed Irish landlord. The Captain is a sentimental ist, his wife a practical-minded moralist. Uninterested  and unhappy in his wedded state he approaches or takes  up with (1) La Delciquita, a Spanish coquette, (2) Mrs.  Basil, wife of a British Major in India, (3) Maisie  Maidan, wife of another British officer, (4) Florence  Dowell, wife of an American globe-trotter who is the  friend of the Ashburnbams, who tells the story, and (5)  Nancy Rufford, a ward. Both her religious training and her social code compel Mrs. Ashburnham to keep up all those appearances which she deems that these and her dignity and social rights demand. She devotes her life to the task of standing by, saving, and reforming her husband. This results in her supervision of both his finances and his love affairs, to the end that her own soul is tortured while she tortures his. The minor characters suffer also, and in the end the Captain kills himself, his last love goes mad, and Leonora accomplishes her ideal, a happy marriage. Previous to this, one flame has died, another committed suicide, and the wise Spaniard has milked the Captain to the tune of twenty thousand pounds.

"I have, I am aware, told this story in a very rambling way, so that it may be difficult for any one to find their path through what may be a sort of maze. I cannot help it. I have stuck to my idea of being in a country cottage with a silent listener, hearing between the gust of the wind and amidst the noises of the distant sea, the story as it comes. And, when one discusses an affair—a long, sad affair—one goes back, one goes forward. One remembers points that one has forgotten, and one explains them all the more minutely since one recognizes that one has forgotten to mention them in their proper places, and that one may have given, by omitting them, a false impression. I console myself with thinking that this is a real story, and that, after all, real stories are best told in the way that a person telling a story would tell them. They will then seem most real." 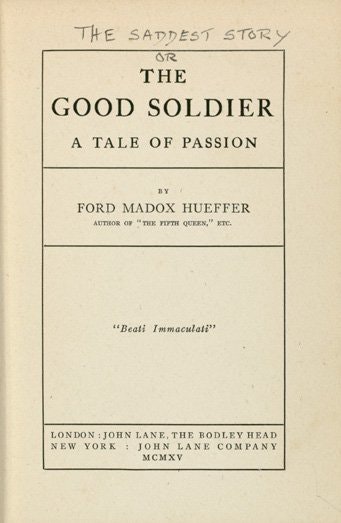 In this story, as has been said, the author makes Dowell, Florence's husband, the narrator, and it is he who dubs it the "saddest one." This is rather a large order when one thinks of all the sad stories that have been told of this mad old world. Nevertheless it is a sad story, and a splendid one from a psychological point of view; but Mr. Hueffer, in spite of the care he has bestowed upon it, has not made it splendid in the telling. In the main he has only suggested its splendor, quite as the paragraph above suggests, and for the reasons it suggests. One half suspects that since Mr. Hueffer shared with Mr. Conrad in the writing of "Romance," the intricate weavings to and fro of that literary colorist have, to a certain extent, influenced him in the spoiling of this story. For it is spoiled to the extent that you are compelled to say, "Well, this is too bad. This is quite a wonderful thing, but it is not well done." Personally I would have suggested to Mr. Hueffer, if I might have, that he begin at the beginning, which is where Colonel Powys wishes to marry off his daughters—not at the beginning as some tertiary or quadrutiary character in the book sees it, since it really concerns Ashburnham and his wife. This is neither here nor there, however, a mere suggestion. A story may begin in many ways.

Of far more importance is it that, once begun, it should go forward in a more or less direct line, or at least that it should retain one's uninterrupted interest. This is not the case in this book. The interlacings, the cross references, the re-re-references to all sorts of things which subsequently are told somewhere in full, irritate one to the point of one’s laying down the book. As a matter of fact, except for the perception that will come to any man, that here is a real statement of fact picked up from somewhere and related by the author as best he could, I doubt whether even the lover of naturalism—entirely free of conventional prejudice—would go on.

As for those dreary minds who find life morally ordered and the universe murmurous of divine law—they would run from it as from the plague. For, with all its faults of telling, it is an honest story, and there is no blinking of the commonplaces of our existence which so many find immoral and make such a valiant effort to conceal. One of the most irritating difficulties of the tale is that Dowell, the American husband who tells the story, is described as, first, that amazingly tame thing, an Englishman's conception of an American husband; second, as a profound psychologist able to follow out to the last detail the morbid minutiae of this tragedy, and to philosophize on them as only a deeply thinking and observing man could; and lastly as one who is as blind as a bat, as dull as a mallet, and as weak as any sentimentalist ever. The combination proves a little trying before one is done with it.

This story has been called immoral. One can predict such a charge to-day in the case of any book, play, or picture which refuses to concern itself with the high-school ideal of what life should be. It is immoral apparently to do anything except dress well and talk platitudes. But it is interesting to find this English author (German by extraction, I believe) and presumably, from all accounts, in revolt against these sickening strictures, dotting his book with apologies for this, that, and another condition not in line with this high-school standard (albeit it is the wretched American who speaks) and actually smacking his lips over the stated order that damns his book. And worse yet, Dowell is no American. He is that literary packhorse or scapegoat on whom the native Englishman loads all his contempt for Americans. And Captain and Mrs. Ashburnham, whom he so soulfully lauds for their love of English pretence and order, are two who would have promptly pitched his book out of doors, I can tell him. Yet he babbles of the fineness of their point of view. As a matter of fact their point of view is that same accursed thing which has been handed on to America as "good form," and which we are now asked to sustain by force of arms as representing civilization.

After all, I have no real quarrel with the English as such. It is against smug conventionalism wherever found, too dull to perceive the import of anything except money and social precedence, that I uncap my fountain pen. It is this condition which makes difficult—one might almost fear impossible at times—the production of any great work of art, be it picture, play, philosophy, or novel. It is the Leonoras, the Dowells, and the Nancys that make life safe, stale, and impossible. They represent that thickness of wit which prospers impossible religions, and moral codes, and causes the mob to look askance at those finer flowers of fancy which are all the world has to show for its power to think in the drift of circumstance. All the rest is formalism and parade, and "go thou and do likewise." We all, to such a horrible extent, go and do likewise.

But you may well suspect that there is a good story here and that it is well worth your reading. Both suppositions are true. In the hands of a better writer this jointure of events might well have articulated into one of the finest pictures in any language. Its facts are true, in the main. Its theme beautiful. It is tragic in the best sense that the Greeks knew tragedy, that tragedy for which there is no solution. But to achieve a high result in any book its component characters must of necessity stand forth unmistakeable in their moods and characteristics. In this one they do not. Every scene of any importance has been blinked or passed over with a few words or cross references. I am not now referring to any moral fact. Every conversation which should have appeared, every storm which should have contained revealing flashes, making clear the minds, the hearts, and the agonies of those concerned, has been avoided. There are no paragraphs or pages of which you can say “This is a truly moving description,” or “This is a brilliant vital interpretation.” You are never really stirred. You are never hurt. You are merely told  and referred. It is all cold narrative, never truly poignant.

This is a pity. This book had the making of a fine story. I half suspect that its failure is due to the author's formal British leanings, whatever his birth—that leaning which Mr. Dowell seems to think so important, which will not let him loosen up and sing. The whole book is indeed fairly representative of that encrusting formalism which, barnacle-wise, is apparently overtaking and destroying all that is best in English life. The arts will surely die unless formalism is destroyed. And when you find a great theme marred by a sniffy reverence for conventionalism and the glories of a fixed condition it is a thing for tears. I would almost commend Mr. Hueffer to the futurists, or to anyone that has the strength to scorn the moldy past, in the hope that he might develop a method entirely different from that which is here employed, if I did not know that at bottom the great artist is never to be commended. Rather from his brain, as Athena from that of Zeus, spring flawless and shining all those art forms which the world adores and preserves.