Here in Ann Arbor, where I happen to live, the big controversy is over the University of Michigan football program. And it's not simply because the team may be on its way to worst season in a long time. Last week, in a game against Minnesota, sophomore quarterback Shane Morris took a hard blow to the head. The defensive player should have been ejected and suspended. But the controversy is over what happened next.

Morris, woozy from the hit, got up and stumbled so badly he needed help from an offensive lineman to stand upright. The coaching staff let him stay in one more play and then, a few plays later, they let him reenter the game, albeit briefly, when his replacement had to come out for one down.

Via ESPN and MGoBlog

Afterwards, Coach Brady Hoke told reporters he had assumed that Morris was wobbly because of a leg injury the quarterback suffered earlier in the game. Medical staff had cleared Morris to keep playing and the quarterback had waved away sideline help. Hoke said he wasn’t even sure if Morris had been concussed. Then, in the middle of the night, Athletic Director Dave Brandon released a statement confirming that, yes, Morris suffered a concussion.

The debate around town now is whether the coaches and administrators are guilty of incompetence, indifference, or some combination. The new university president has issued an apology, reaffirmed the school’s commitment to player safety, and vowed to review team procedures. Alumni, fans, and a sports columnist for the Michigan Daily have called for ousting either Brandon or Hoke, and the whole thing has become one giant mess.

Jonathan Chait—a Michigan graduate and devoted, if demoralized, fan—has a summary of the whole thing if you want to read more. Or you can just turn on the television, because the incident has now become national news. In the last few days, I’ve seen feature segments on ABC News, CNN, and MSNBC. Partly that’s because there are a lot of Michigan alumni in the media. (Sanjay Gupta, who did the CNN story, got both his undergraduate and medical degrees here.) Partly that’s because Michigan prides itself on taking the “student” part of the “student-athlete” phrase seriously.

But there’s one other reason, I think: The video of Morris being hit and then staggering is unusually vivid. This is obviously not the first time a football player has suffered a concussion or a coaching staff has allowed him to keep playing. Camera footage has simply made the problem harder to ignore.

It happened that way with the Ray Rice-domestic violence story. It’d be nice if this controversy, too, sparked a broader conversation—in this case, about concussions and what to do about them.

As it happens, PBS Frontline just released a new report about the concussions in football—and the impact they have on players. The basis is a series of exams that Boston-area researchers have conducted on the brains of former, deceased football players. The project is a collaboration between the Department of Veterans’ Affairs brain repository in Bedford and the Boston University CTE Center. CTE stands for chronic traumatic encephalopathy, a degenerative brain disease. So far, of the 79 brains that researchers have examined, 76 were found to have it.

It’s not a scientifically random sample, but the results are telling all the same, as the Frontline piece explains:

…players represented in the data represent a skewed population. CTE can only be definitively identified posthumously, and many of the players who have donated their brains for research suspected that they may have had the disease while still alive. For example, former Chicago Bears star Dave Duerson committed suicide in 2011 by shooting himself in the chest, reportedly to preserve his brain for examination.

Nonetheless, Dr. Ann McKee, the director of the brain bank, believes the findings suggest a clear link between football and traumatic brain injury.

“Obviously this high percentage of living individuals is not suffering from CTE,” said McKee, a neuropathologist who directs the brain bank as part of a collaboration between the VA and Boston University’s CTE Center. But “playing football, and the higher the level you play football and the longer you play football, the higher your risk.” …

Among the NFL legends found to have had CTE are Duerson, Hall of Fame Pittsburgh Steelers center Mike Webster and former San Diego Chargers legend Junior Seau. On Monday, ESPN’s Outside the Lines reported that a New York neuropathologist had discovered signs of CTE in the brain of Jovan Belcher. In 2012, the former Kansas City Chiefs linebacker shot and killed his girlfriend before driving to a Chiefs practice facility, where he committed suicide in front of team officials.

That last part is important, and not merely because it will affect the outcome of legal negotiations over how to compensate players who have suffered brain injuries. If violence on the field somehow increases the likelihood of violence off the field, then players don’t simply put themselves at risk when they play. They put others at risk, too.

This isn’t an easy thing to admit, particularly if, like me, you’re a lifelong fan of the game who still tunes in every weekend. One hope is that, with a combination of technological advance and rule changes, football can dramatically reduce the incidence of brain injury. One helpful tool might be a chart that Frontline put together, showing which position players are most prone to concussions: 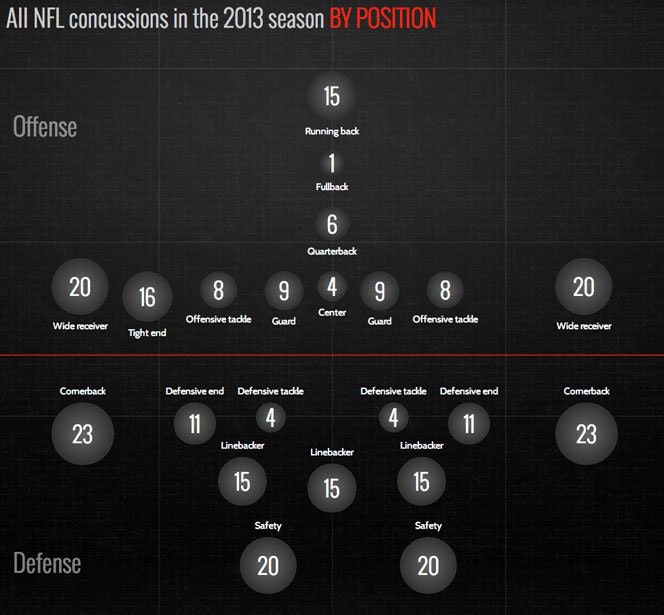 You'll notice that wide receivers and defensive backs have the most reported concussions. That's presumably because they are the ones who have the most collisions at high speed. It's simple physics: kinetic energy is proportional to velocity squared. The guys on the line are the biggest, but the ones on the edge are the ones running most quickly.

Both the NCAA and the NFL have already taken some steps to reduce the threat these players face. Hard hits on “defenseless” receivers, for example, are no longer legal. Teams kick off closer to their opponents' end zones, diminishing the prospects for runbacks, which typically feature players sprinting downfield at potentially concussive speeds.

These changes haven't hurt the game. It remains to be seen how much they help the players. Fans like may are hoping they make a difference, because without these and other changes, the game we love may become too painful to watch.