If The West Wing was wish fulfillment for liberals of the 1990s — a president with a Nobel in economics who is a devout Catholic but nevertheless zings bigots instead of placating them — then House of Cards is wish fulfillment for present day centrist pundits, such as Maureen Dowd and Ron Fournier, who are desperate for a president who’ll show a little leadership and get something done by cracking a few congressional skulls.

In Season 3, which Netflix released last weekend [note: many spoilers ahead!], President Frank Underwood, who has murdered his way into the White House, is up against a Republican-controlled Congress and dissatisfied Democrats. But instead of complaining, as Obama did, that he can’t do a Jedi mind meld on the opposition, Underwood schemes, cajoles, and blackmails his way into enacting a sweeping jobs program. Countless centrist columns about “leadership” haven’t gotten much but mockery from Obama, but their authors can imagine what might happen if a president actually took their advice (while also having threesomes with Secret Service members).

As has been well documented, these columns generally acknowledge that it’s in Republicans’ interest to block whatever Obama wants, either for political reasons or because they actually deeply oppose it, and then demand that Obama overcome the roadblocks anyway. “The job of the former community organizer and self-styled uniter is to somehow get this dunderheaded Congress, which is mind-bendingly awful, to do the stuff he wants them to do,” The New York Times’ Maureen Dowd wrote in 2013, after Obama said he couldn’t make Republicans behave. “It’s called leadership.” Dowd has urged Obama to be more like Lyndon Johnson as well as Michael Douglas in the movie The American President. In The Wall Street Journal in 2013, Peggy Noonan said rock-solid Republican opposition is “never a shock and not an excuse. It's business as usual. And if you're a leader you can lead right past it.” The Washington Post’s Dana Milbank has written, “It’s the president’s job to lead, and to bang heads if necessary...” The National Journal's Ron Fournier scolded ahead of the 2013 shutdown, “Great presidents overcome great hurdles.” Or as he wrote after the 2012 election, “Obama wins! Big whoop. Can he lead?”

The answer, so far, does not appear to be yes. But you know who can? Netflix President Frank Underwood. In Episode 1 of the third season, Underwood is in a meeting with advisors, and he’s super mad.  “Remy has shown me your plan so far, and it’s toothless,” Underwood says, throwing the papers on the table. 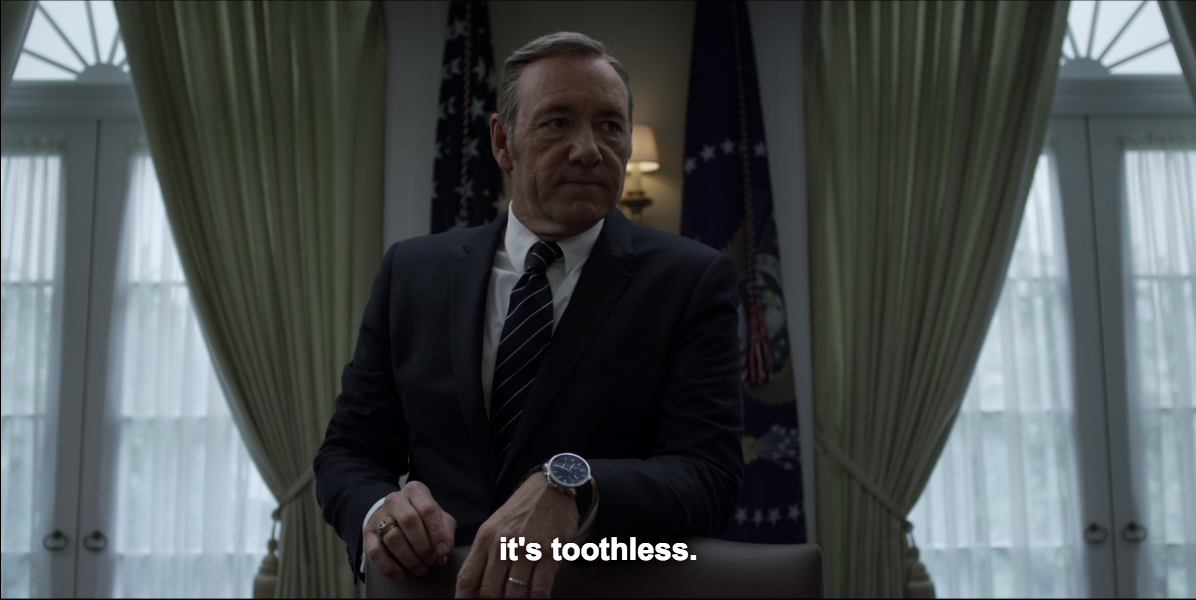 “Social Security, Medicare, Medicaid — every entitlement program that’s sucking us dry, I want it all on the table.” Not only does Underwood emulate the style preferred by centrist pundits, he shares many of their policy preferences. His “America Works” plan would cut $500 billion from those three programs to pay for guaranteeing jobs to anyone who signs up. (As Vox’s Danielle Kurtzleben explains, the plan is both preposterous and dumb.) A gray-haired advisor — representing calcified old liberalism, perhaps? — objects that these programs have been vital to Americans for decades. “They were the bedrock of the American dream but they’re not anymore,” Underwood says. Not with 10 million Americans out of work. “I don’t want a version, I want a vision!” 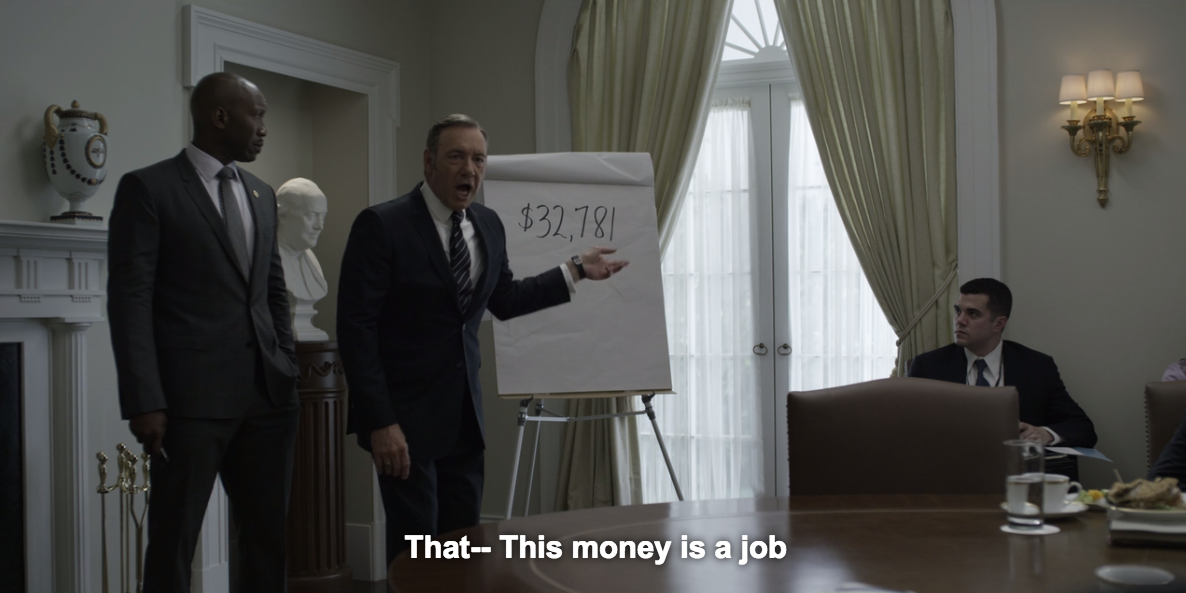 Underwood presents his plan to the American people with a bold speech. “You are entitled to nothing,” he says. “America was built on the spirit of industry. You build your future. It isn’t handed to you.” To quote Fournier writing about Obama’s State of the Union address earlier this year: “Close your eyes, set aside your opinion of Obama, and objectively listen to a chunk of the address. Does he sound like a college professor — dismissive, dour, arrogant, and argumentative? Or does he sound like a preacher — inspirational, inclusive, optimistic, and humble? The latter approach is the mark of a great leader.”

Obama and Underwood both have a problem LBJ did not in his early presidency: a Republican Congress. But does Underwood whine about longstanding structural obstacles to passing major legislation? No. Is he a man who "hates selling and explaining and negotiating and cajoling and knocking noggins," as Dowd described "Sir Lecturalot"? Definitely not. Instead, Underwood knows, like Dowd, that, "You have to be there. You’ve got to be all over these people." He raids FEMA funds to pay for his plan, because unemployment is a “disaster.” He fires the head of the Department of Homeland Security. The show's version of The New York Times gives him a hard time, but some in the media are impressed.  “At least he’s doing something,” a reporter says in Episode 5. “Walker didn’t do shit.”

Miraculously, in Episode 7, Underwood even wins in the most important moderate pundit metric of all: Sunday shows. A Republican congressman and a Democratic congresswoman appear together to rave about Underwood’s program on Chuck Todd’s Meet the Press, the No. 1 mainstream Washington platform. “When something works, it works. And America Works works,” the Republican says with a southern accent (the highest mark of authenticity in American politics.) 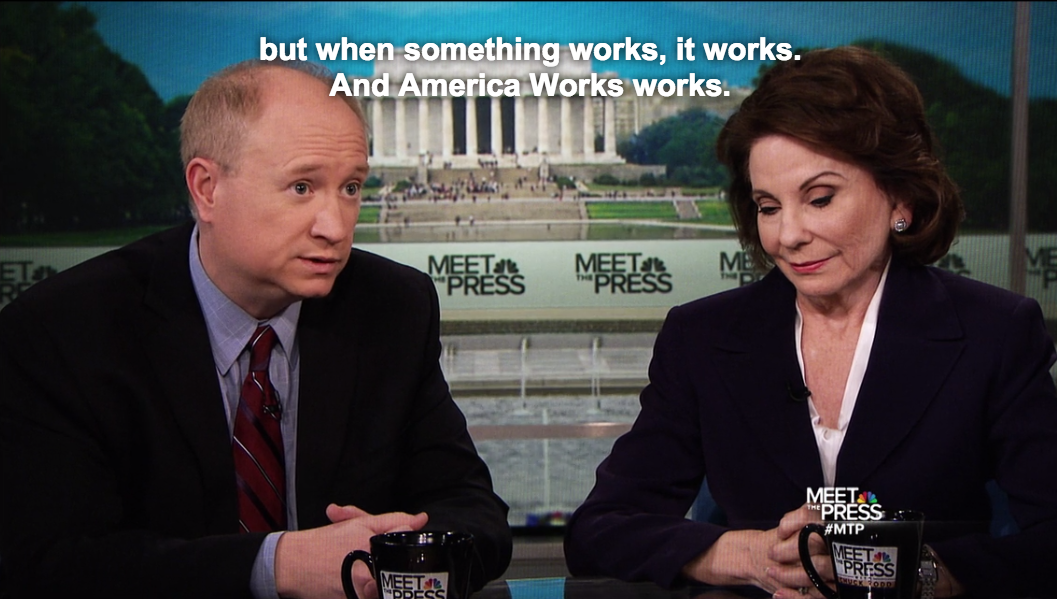 Underwood, who pees on his dad’s gravestone and spits on a Jesus statue, shows absolute reverence as he walks through the FDR memorial in Washington. He wants to do something big, something lasting, something great. Something that crosses party lines and busts old ideologies. And he doesn’t need Jedi mind tricks to do it. Just old fashioned dirty tricks.

By Episode 9, Underwood has fundamentally altered the character of American society, or at least the character of American society according to curmudgeons who say we all feel we’re owed something. The president, in campaign speeches in Iowa — land of ethanol subsidies! — has got crowds finishing the sentence “You are entitled to…” with a rapturous shout of “NOTHING!”

Underwood doesn’t just lead at home. He leads the president of Russia, Viktor Petrov, a taller and wittier Putin. According to the leadership pundits, Obama is a feckless weenie when dealing with nefarious heads of state. This is sometimes explicitly linked to a lack of manliness, as with Marc Thiessen in The Washington Post on Obama’s red line: “It was one of the most embarrassing and emasculating episodes in the history of U.S. foreign policy.” Or with Dowd’s description of negotiations over Syria strikes: “The administration’s saber-rattling felt more like knees rattling.” Or with Fournier’s analysis of the dynamic between Obama and Putin in 2014: “In other words, the bully has stolen your lunch money without a fight and now you're telling him, ‘It would be a bad choice to take one more penny from anybody in this lunchroom, Buster!’” Not Underwood. He brings the full force of American masculinity to a bunker in the Middle East, where Fake Putin awaits to negotiate over an incomprehensible peacekeeping mission. Underwood’s wife had objected to the trip:

Claire Underwood: Why won’t you place faith in a diplomatic solution?

Frank Underwood: This is diplomacy. Sometimes it comes down to two men in a room.

What happens in that room? Petrov brags about killing a man with his bare hands. And then he says, admiringly, that Underwood could kill a man, too. As we all know, he did!

In this room, Underwood is in a weak negotiating position. But does he start “whining” and “whiffing” when “dealing with some really evil guys and some really nutty pols,” as Dowd said of Obama last year? He does not. Dowd suggested Obama be as tough in the face of a “crazed tyrant” as NBA commissioner Adam Silver. “Silver took the gutsy move of banning cretinous Los Angeles Clippers owner Donald Sterling for life… Silver realized that even if Sterling tries to fight him in court (and wins) he will look good because he stood up for what was right.”

Obama might not have taken that advice (because it doesn’t really make sense?) but Underwood did. He got Petrov to do the right thing in the Jordan Valley, and all Underwood had to do was fire his own wife from her post as ambassador to the United Nations. It was the right thing to do! And also the Iowa caucuses were approaching

The show is both very entertaining and very dumb. You are rooting for the Underwoods to win, to get away with all their crimes, to trick reporters with platitudes delivered in an aggressively bad southern accent, and to lead us all into rallying behind the total destruction of a social safety net. Sometimes we don’t get the fantasy president we want, but the one we deserve.