The 47 Republican signatories to an open letter discouraging the Iranian government from striking a nuclear deal with the Obama administration have been denounced for committing a broad spectrum of infractions: from the conceptual misdemeanor of embarrassing the president as he conducts U.S. foreign policy to genuine felonies like violating the Logan Act—which prohibits individuals from conducting freelance diplomacy with foreign governments—and outright treason. 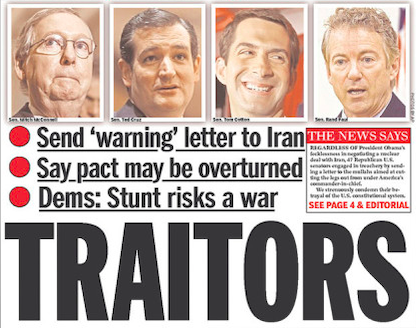 These critics are so fixated on the form of the action these senators took that they’ve drowned out most substantive criticisms of its inept strategy and the GOP’s unspoken foreign policy objective—regime change in Iran. With respect to both the merits of the accusations, and the direction of their focus, they’re also wrong.

To see why, consider these two thought experiments.

First, imagine that Senator Tom Cotton, who drafted the offending document, had written it as an opinion column rather than an open letter. Senate Republicans didn’t send the Iranian government any private correspondence as far as we know. They didn’t “send” anything at all, really, except perhaps to select reporters. They issued a press release, and then slapped the equivalent of “Dear Sirs” on top of it. If 47 Republican senators had instead co-bylined an op-ed containing all of the same factual information that appears in the letter, and with Iranian officials as its intended audience, nobody would’ve questioned its legality or legitimacy.

This would have been a terrible, tedious op-ed. Its subversiveness might have caused a stir. But I can’t imagine anyone would have called it treasonous.

Cotton’s execution here was reckless and feckless in equal measure. And yes, it’s unconventional for a partisan congressional caucus to undermine a sitting president’s foreign policy like this. But you can’t untangle his tactics from his goals unless you’re willing to accept a certain level of congressional abdication from foreign policy under all circumstances. What makes Cotton reckless isn’t so much that he’s willing to go to extraordinary lengths to achieve his purpose. Its that his purpose is extremely unwise.

Not everyone in Congress has such bad ideas. In 2003, too many Democrats voted to grant President George W. Bush the authority to use military force in Iraq. This was a generational error. We’d all be better off today if they’d refused, and that wouldn’t have violated any vaunted foreign policy norms. But what if convincing fellow Senate Democrats to resist the Bush administration required extraordinary interference? If a Democrat had read conflicting weapons of mass destruction intelligence into the record on the Senate floor and warned the British government and other allies that Bush was manipulating them into war. This would’ve ruptured the normative foundations of foreign policy like an earthquake. It also would have been protected by the Constitution, and worth the damage.

An alternate history in which a meddling Democrat derails (or merely disrupts) war with Iraq must also include the fact that Republicans like Tom Cotton would have called him a traitor. And that they’d probably have destroyed his political career—especially if the effort had been successful, and thus never vindicated by a disastrous war. But hypocrisy is beside the point. What matters is whether Republicans today are acting out of a sense of public duty, and whether their objectives are wise and achievable.

I think scuttling a deal to clear the path to regime change is both irresponsible and far-fetched. I also think the atmospherics surrounding the letter itself—that it was written by an ambitious Republican freshman, that GOP presidential hopefuls signed the letter but moderates and experienced foreign policy hands did not, that Cotton is hoping to recruit Republican signatories outside the Senate—suggests Cotton is engaging in intra-coalition politics, rather than solely advancing his substantive foreign policy goals.

But that’s what makes his actions reckless. The point isn't to trivialize procedural objections but that the goals you pursue and meet when you take a step like this should determine how it's judged. If the answer to these same above questions was yes, it would put Cotton's unorthodox tactics in a much different light.

Brian Beutler is a senior editor at The New Republic. He hosts Primary Concerns, a podcast about politics.