The question is not whether Hillary Clinton will announce she's running for president in 2016. The question is: In what hip new media format will she announce it?

Clinton faces serious competition in the totally-cool-for-an-old-politician game. Ted Cruz announced he's running for president on Twitter. Rand Paul revealed that he's on Snapchat in a Facebook post; the format in which he'll announce his presidential candidacy later this month is thus far unknown. The White House has started posting on Medium, and has used Flickr for ages. The National Republican Congressional Committee runs a BuzzFeed ripoff. Iowa Sen. Chuck Grassley appears to be a member of the shadowy internet comedy troup known as Weird Twitter.

Clinton is a juggernaut, maybe unstoppable, a massive asteroid that will crush all in her path. Even so, she's not invulnerable. She has her flaws, her scars, her vulnerabilities. One of them is that, after 30 years in the public eye, she's a relic of the past, a '90s throwback, an old-timer who has spent her best ideas. And so Clinton, a baby boomer, must convince Gen X political reporters that she totally gets the millennials.

How could she do this? With apps. Here are the Clinton campaign's possible social media announcement options, ranked.

Pros: There are infinity moms on Facebook. Posting on Facebook first signals solidarity with the mom community and has the potential for massive numbers of shares and likes and comments with likes of their own. Clinton could game the system and drive those numbers even higher by using a baby picture plus the newsfeed algorithm magic word "congratulations."

Cons: The teens are abandoning Facebook: it's down to only 38 percent young people. Reading the Facebook newsfeed is like slipping into a pink bubble bath of hell. That's why it's so popular. Facebook is lame. It does not signal the future.

Pros: Clinton has promised a new relationship with the press, and Twitter is where reporters live. A reference to a classic tweet would show the candidate's social media savvy and rebut criticism that she's too risk-averse.

Cons: Twitter is the natural home of rage, outrage, and other unpleasant things.

A forwarded email encouraging readers to click a link to a pop-up styled as a Windows 98 alert warning.

Pros: Less-sophisticated computer users will try to scrub the virus from their machines and be directed to the campaign website. The strategy has a strong potential to convert supporters to donors and is likely to resonate with older people, who vote in higher numbers.

Cons: Announcement could spread slowly if a large number of grandmas forget to check their AOL accounts. Negative associations with malware could inspire blog posts comparing the Clintons to a virus. 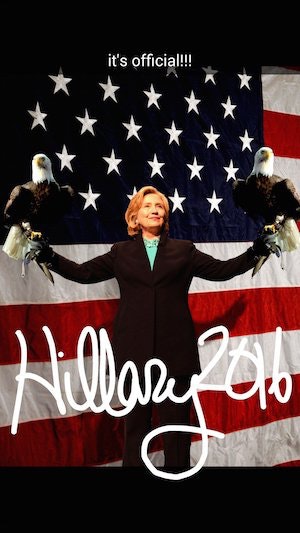 Pros: Snapchat has 100 million users, 71 percent of whom are millennials. The app is the thing everyone is talking about this month as the future of all media. Communicates "totally gets it." 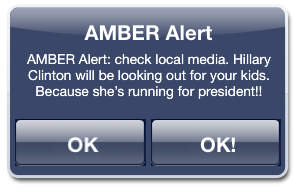 A partnership to "raise awareness" about child safety as well as promote the candidate.

Pros: Guaranteed attention from a huge audience. Voters would have to look at and read Clinton's name on their phones, even if only to dismiss the message. Subtle reminder that a large government program can work well. Positive associations include communities working together and families reunited.

Cons: Some negative associations, such as kidnapping.

The candidate could launch a Tumblr—called, oh, I don't know, something like Hill YES! 2016—to show Clinton's funny, vulnerable side, with jokes about life on the campaign trail.

Pros: Politics is about words and images, Tumblr's currency in trade. The personal, confessional tone of the site would be humanizing. It's cool, yet self-effacing. Very sharable.

Cons: Intentionally DIY feel might confuse older voters. Some teens will still be ineligible to vote in 2016.