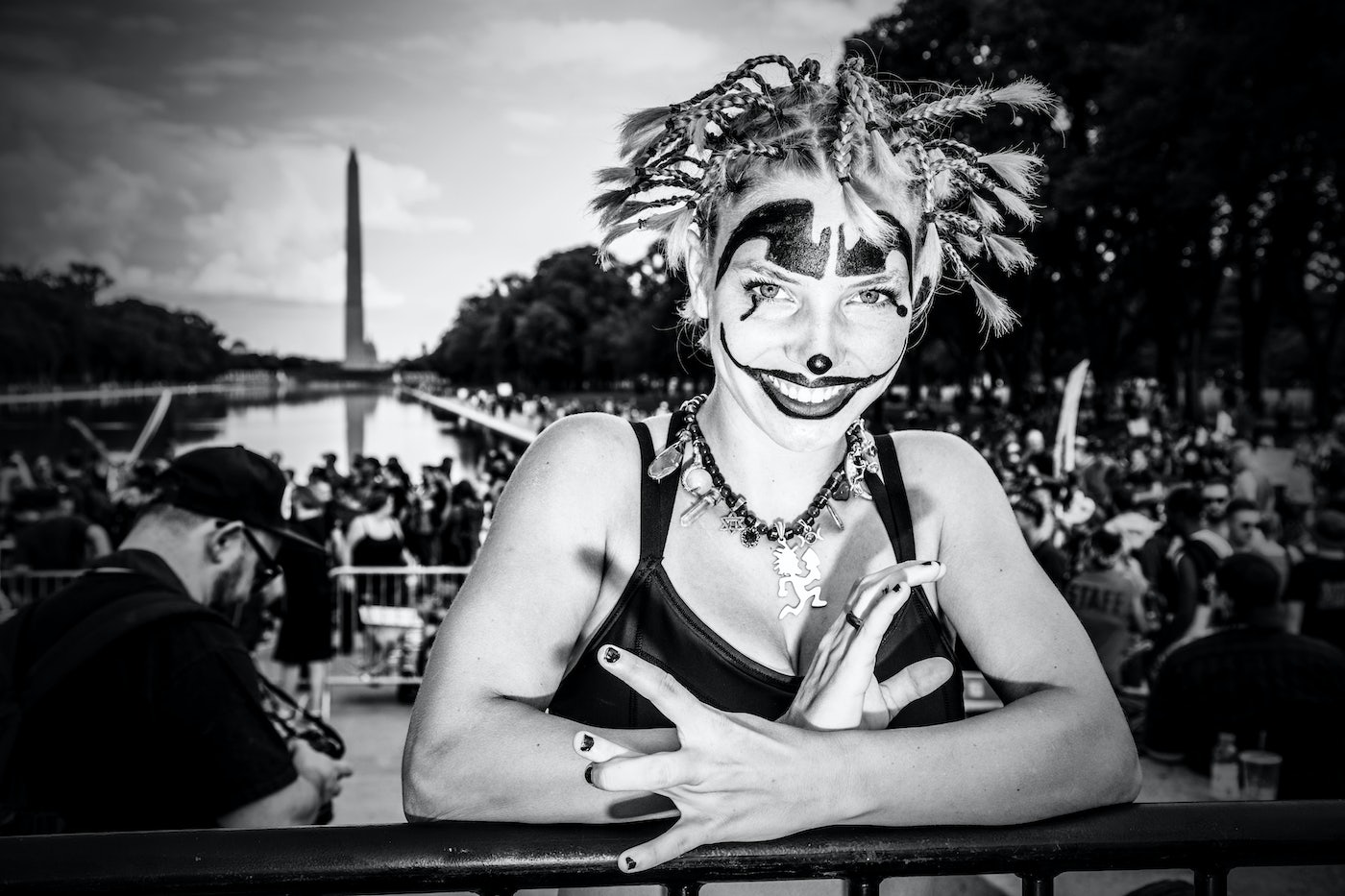 “It’s fuckin’ beautiful, dog,” said Ratchet, dressed in full-face clown makeup and ripped black jeans, while marching toward the U.S. Capitol in Washington, D.C. “To see the Lincoln Memorial—on every penny we’ve ever held in all of our lives—and then to see one of the most unaccepted subcultures posted up in front of it chanting for love, that was incredible.”

Ratchet is a Juggalo, the sobriquet for fans of Insane Clown Posse, a “horrorcore” rap duo known for their violent lyrics, absurd aesthetic, and lewd annual gatherings. Approximately 1,500 of them and their supporters from across the country marched on the National Mall on Saturday to protest the FBI, which in its 2011 National Gang Threat Assessment defined Juggalos as a gang. (“Many Juggalos subsets exhibit gang-like behavior and engage in criminal activity and violence,” the report read.) Juggalos contend this designation is not only unwarranted, but has had real consequences for fans. “There’s just some people who have really had their lives turned upside down because they’ve had hatchet tattoos,” said Juggalo supporter Alison Davis, referring to the “hatchet man” symbol of Insane Clown Posse’s record label. Juggalos say that police and potential employers discriminate against people with this tattoo or who wear the band’s merchandise.

While the band’s lyrics tend to be violent—and some Juggalos have engaged in criminal behavior—Juggalos as a whole are a non-violent bunch. I’ve rarely felt safer among a group of protesters. Mark Peterson, the photographer for this essay, agreed: “The Juggalos were the nicest people I’ve photographed in the last four years,” he said. While pranks were common, Juggalos discouraged misbehavior among their peers. During the march, one Juggalo attempted to push over a roadblock and was quickly stopped by two others who steadied the barrier. Afterward, one Juggalo put a hand on the shoulder of the perpetrator, as if to say, “Nah dude.”

While some Juggalos told me they’re non-political, there was an obvious progressive bent to the crowd. Supporters chanted “This is what Democracy looks like!” and taunted fans of Donald Trump. During their speech to the crowd, Insane Clown Posse members told their supporters that if Juggalos want respect, they must respect and fight for other marginalized groups. “A lot of people don’t want discrimination in this country anymore, man,” co-leader Violent J said. “They don’t want bullshit racism. They don’t want hate. That’s played out and ancient, man. And I feel like today we’re representing a lot of that bullshit. We’re representing the force against it.”

Ratchet said the rally brought him to tears. “That’s all we’re here for, acceptance of all people,” he said, his arm wrapped tightly around his wife, Sukkew, who is also his partner in their rap group Deviant Horror. “Regardless of color, religion, finance. None of it matters. We’re all living, breathing humans.”

A Juggalo, wearing a hatchetman pendant, is interviewed by The Real News Network. The hatchetman is the symbol for Psychopathic Records, the Insane Clown Posse’s record label—though most people, including law enforcement, consider it a Juggalo symbol.

What is a Juggalo? The Insane Clown Posse have a song whose title asks that very question. One answer: “Oh, he gets butt-naked / And then he walks through the streets / Winking at the freaks / With a two-liter stuck in his butt-cheeks.” Other answers aren’t fit to print. Perhaps the better question is, What isn’t a Juggalo? Lauryn Love, 28, offered this answer: “Not being a Juggalo is not listening to the music, not being peace-loving, and being a fucking asshole.”

Though some attendees told me they weren’t political, many at Saturday’s march held signs and yelled chants that can be traced to left-wing movements. In addition to this Juggalo’s play on Black Lives Matter, other Juggalos carried signs saying “Juggalo Love Trumps Hate” and “Fuck Fascists,” while others chanted “this is what democracy looks like.”

Juggalos and their supporters contend that having an Insane Clown Possee tattoo, such as this one, makes one particularly vulnerable to discrimination—both by police and potential employers.

Juggalos and their supporters yell in protest as a speaker mentions the FBI.

“Family” was a popular chant at Saturday’s march and rally. Protesters held signs saying “We are not a gang, we’re family” and “I love my Juggalo family.”

After a long day of protesting and marching that started at 2 p.m., Juggalos and their supporters were treated to a performance at around 9 p.m. Clowns onstage sprayed bottles of Faygo—the official soda of the Juggalos—into the crowd.

Mark Peterson is an award-winning American photographer represented by Redux Pictures in New York. His latest monograph is Political Theatre, a look at the 2016 U.S. presidential election.