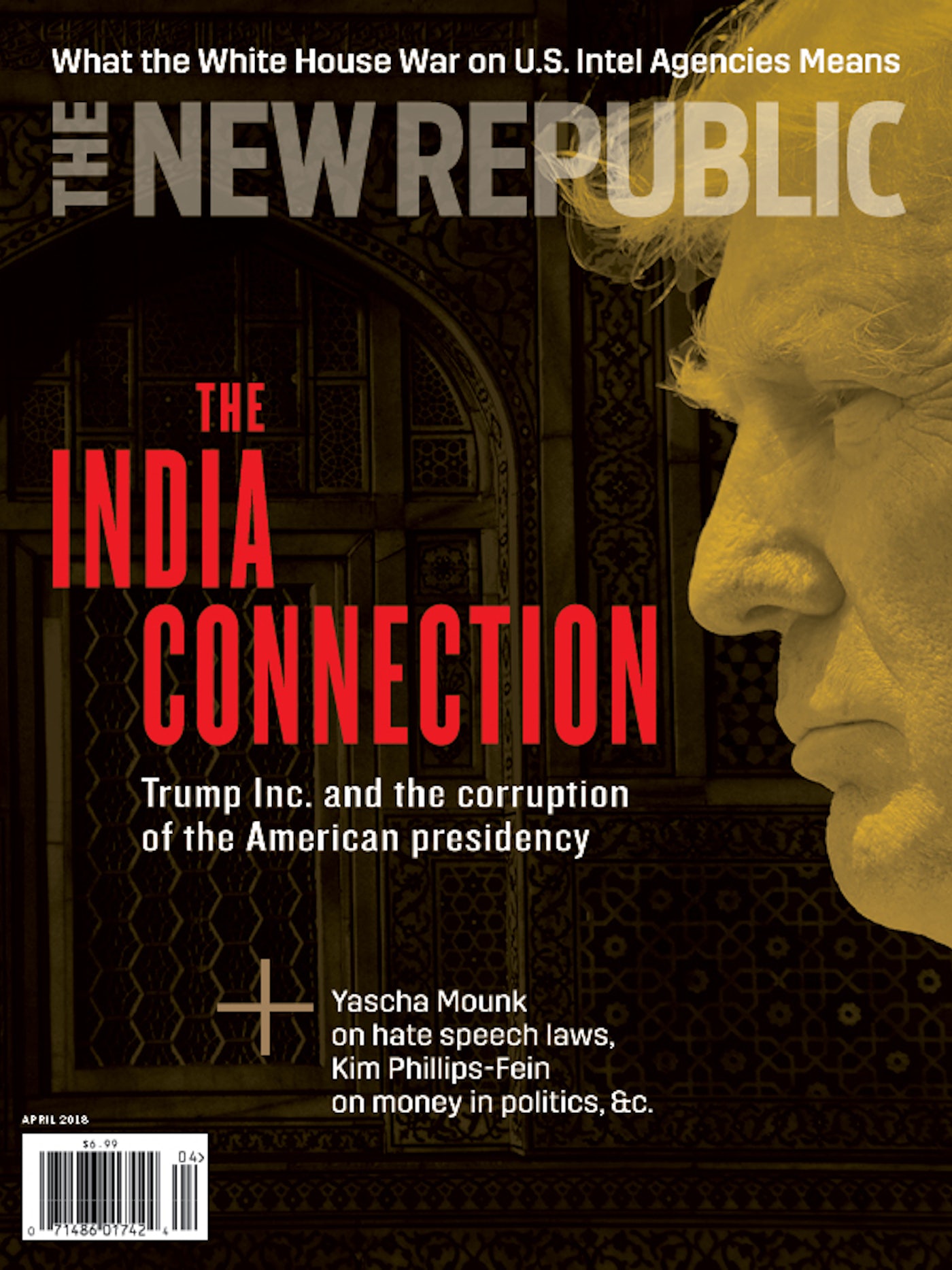 New York, NY (March 21, 2018) — The New Republic today published its groundbreaking April cover story, “Political Corruption and The Art Of The Deal,” a bombshell investigative look at how the Trump Organization’s business partnerships in India are creating conflicts of interest in the White House and corrupting the presidency.

The months-long investigation was conducted in collaboration with The Investigative Fund.

Additional information about the issue is included below.

In “Anti-Intelligence,” James Bamford, author of a trilogy of books on the National Security Agency, takes a look at Trump’s war on the U.S. intelligence community and how his campaign to discredit his own intelligence agencies highlights how drastically he has shattered many of the spy world’s long-held norms.

In “After the Strongman,” essayist and novelist Karan Mahajan explores the coup in Zimbabwe that brought down Robert Mugabe, a liberation hero who became a corrupt dictator. Mahajan questions whether or not the fall of Mugabe has led to the start of a real democratic era after spending time in Zimbabwe interacting firsthand with those intimately connected to the situation.

In U.S. & the World, Jeet Heer explores how the recent wave of GOP retirements could reshape foreign policy in Washington.  In “America’s Disappearing Foreign Policy,” Heer writes, “The real story of the Republican resignations is that the GOP is losing some of its last few members who believe in thoughtful (if conservative) internationalism, trusting in diplomacy, arms-control deals, and alliances like NATO.” Hahrie Han looks at how a megachurch in Ohio has revived religious community activism in “Building a Bigger Tent.”

In “More Than a Nuisance,” Peter Edelman looks at the effect of nuisance laws on segregation in America’s cities and how “the poor are often punished simply because they are poor, and especially if they are people of color.” Yascha Mounk examines Germany’s risky law for stopping hate speech on social media and how “laws that were once thought to be harmless can easily be misdirected to deeply oppressive uses.” In “Verboten,” Mounk writes, “The best defense of liberal democracy is not to punish its harshest critics — but rather to convince as many people as possible of its merits.”

Alan S. Blinder, Economics Professor at Princeton University and Former Vice Chairman of the Federal Reserve, contributes a column this month. In “Most Illogical,” Blinder shares his insight into the relationship between politicians and economists, explaining why—contrary to popular belief—economists do not have enormous influence over economic policy. “Politicians use economics the way a drunk uses a lamppost—for support, not illumination,” writes Blinder. “Trump just made it worse.”

In “Company Men,” Kim Phillips-Fein explores the 200-year legal struggle that led to Citizens United and gave corporations the rights of people outlined in a new book by Adam Winkler, We the Corporations: How American Businesses Won Their Civil Rights.

In “A Model Businessman,” Siddhartha Deb explains what Dave Eggers misses in his latest book The Monk of Mokha about a Yemeni-American man’s rise. He writes “Eggers does not ask why his readers need Mokhtar to succeed as an entrepreneur in order for his humanity to be of significance.”

In “Hype for the Best,” Samuel Moyn takes a look at Enlightenment Now, which explores how author Steven Pinker insists that human life is on the up. “By all significant measures, humans are making progress. Whereas before [Pinker] argued that people are more likely to stay alive, now he wants to show that they are flourishing more than ever across a wide array of areas,” writes Moyn.

Poems by Fady Joudah, Julie Carr and Debora Kuan are featured this month. For Res Publica, Editor-in-Chief Win McCormack explains how we should understand political corruption in America in “Possession.”

The entire April issue of The New Republic is available on newsstands and via digital subscription on March 22.