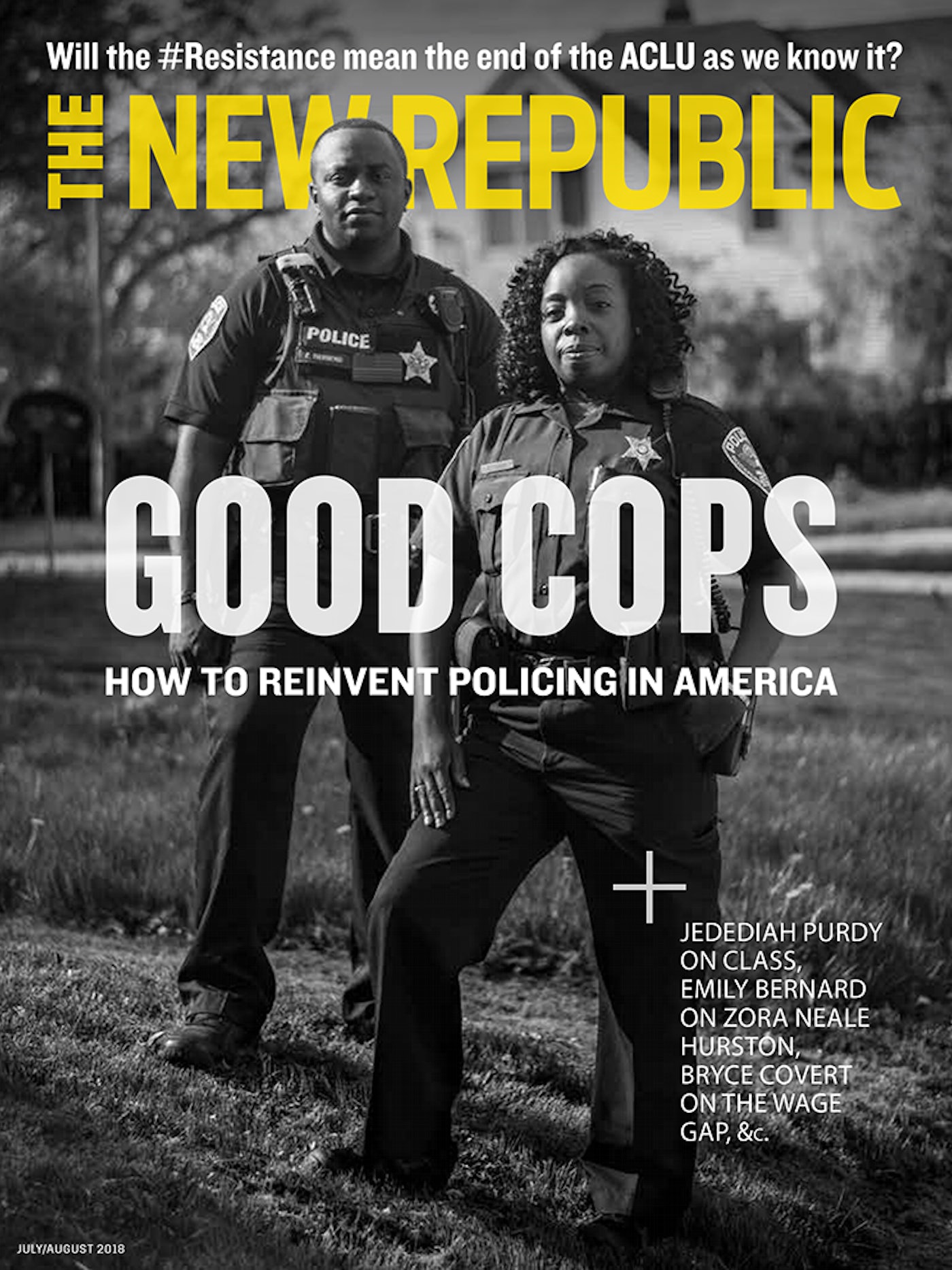 New York, NY—(June 21, 2018)—The New Republic today published its July/August issue, which features a timely cover story that explores how the city of Rockford, Illinois chose to tackle crime, combat racism and reckon with the legacy of police brutality.

“Rockford is now typical of many small and midsize cities across America that are suffering from what we tend to think of as big-city problems -- guns, drugs, and gangs,” explains Ben Austen in “Peace Officers”. “At a time when trust in law enforcement has it historic lows, a group of resident officer community keepers, Rock Cops, have taken the approach of treating the underlying conditions that breed crime in order to reconstruct the interactions between police and civilians.”

Additional information about the July/August 2018 issue is included below.

In “No Shelter Here,” Brian Goldstone examines how thousands of African refugees have fled to Israel, seeking asylum from repressive regimes. However, instead of offering safe harbor, the government has done everything it can to force them out, including secretly funneling them into the hands of human traffickers. “In Israel, the initial response to the arrival of these men and women was one of tentative generosity,” writes Goldstone. “It gradually grew apparent, however, that the Olmert government had little interest in accommodating, much less ‘absorbing,’ a non-Jewish refugee population.” What does it mean when there’s no safety in the land of last refuge?

Marin Cogan analyzes how the ACLU has transformed itself from a nonpartisan protector of civil liberties into one of Donald Trump’s most bitter political foes in “The Twilight of free Speech Liberalism.” “It has been involved in some of the most important and controversial legal cases in U.S. history, cultivating a reputation as a nonpartisan organization that confronts the government on a principled basis, regardless of which political party is in power,” writes Cogan. Now the organization has been forced to grapple with fundamental questions about its role in American society.

As the 170th anniversary of the Seneca Falls Convention approaches, Bryce Covert presents a case against employers questioning potential employees about their previous salary in “Closing the Wage Gap for Women.” In 2018, the large majority of hiring managers rely on a person’s past salary when presenting a new job offer. This can perpetuate unequal wages for women and people of color who are typically paid less than white men. Covert argues, “if future pay is based on previous earnings, the the original sin of an initial hire taints a woman’s entire working life.”

In “From City Hall to the White House,” staff writer Alex Shephard challenges Democrats to take mayors seriously as presidential candidates. “With no obvious front-runner heading into the 2020 primary, charismatic, well-connected Democratic mayors think they could make the leap from City Hall to the White House,” explains Shephard. The advantage mayors have in the race is that they not only oversee affluent, booming cities, but they also serve as a crucial line of defense against the Trump administration’s policies.

“Wet, Hot, Aristocratic Summer” examines America’s enduring obsession with the British royals that transcends traditional political division in the states. Global Affairs editor Heather Souvaine Horn dives into what she deems Americans’ “nostalgia for a system that finds dignity in stasis.” Horn parallels the steady decline of American social mobility with the recent surge of anti-modern trends to argue that Trumpism is only a symptom of a broader issue — the desire for easy solutions and a simpler time.

“Climate Kings” from Samuel Miller McDonald investigates how a new generation of authoritarian leaders are using climate change to seize power. National crises make governments vulnerable to autocracy, and the crisis of climate change is one that puts more than just developing nations at risk. McDonald explains that “when conflicts over resources break out in the developing world [due to major shifts in climate], they are bound to generate crises that spill into wealthier countries.”

Rikha Sharma Rani analyzes the Trump administration’s unprecedented treatment of children as political leverage in the immigration debate in “Weaponizing Children.” Rani explains that “the president has largely ignored history and convention, even as it relates to the most vulnerable and valuable resource in society.” Rani believes the Trump administration has enacted policies that inflict harm on children proactively, rather than passively as his predecessors. As immigration is now the most pressing issue of the 2018 midterm elections, it is up to the American people to right these wrongs.

Jacob Silverman analyzes Silicon Valley’s emerging role in America’s forever war in “Tech’s Military Dilemma.” Government and technology have always been partners, and the Joint Enterprise Defense Infrastructure (JEDI) plays a significant role in the Pentagon’s strategy to ensure that its war-waging capabilities keep pace with technological change. Silverman explains “Big Tech increasingly has the power and ethical obligation to help decide what sort of country the United States should be.”

“The Remaking of Class,” by Jedediah Purdy explores how though class has been long a silent presence in American life, it is now sharply felt in upheavals and displacement across the country. Purdy examines three new books, Amity and Prosperity: One Family and the Fracturing of America by Eliza Griswold, Class Matters: The Strange Career of An American Delusion by Steve Fraser and Hinterland: America’s New Landscape of Class and Conflict by Phil A. Neal, that go beyond recent assumptions about class in America and attempt to grasp a new situation.

“Sobriety Art” from Daphne Merkin takes a look at how Leslie Jamison rejected the link between creativity and alcoholism in her new book, The Recovering: Intoxication and Its Afterman. “The Recovering, as its present participle title suggests, is a story of the long, painful, resistant, and unoriginal road to getting - and staying - sober as much as it is a narrative of addiction,” Merkin writes. “[It] creates its own grainy context, defying all the usual tropes of addiction memoirs.”

Emily Bernard reviews Barracoon: The Story of the Last “Black Cargo” in “Witnesses for the Future.” In her book, author Zora Neale Hurston tells the story of the slave trade’s last survivor, Cudjo Lewis. Bernard explains that Hurston uses her book to change the traditional narrative of the slave trade. “The history of the transatlantic slave trade...had for too long been dominated by information about ships, wars, kings, and mutinies; accounts of sales, profits, and losses,” writes Bernard. Historically, these stories are from the point of view of the seller, but not one word has been told from those who were sold, until now.

Benjamin Kunkel takes a look at the partisan world of poet Pablo Neruda by examining Neruda: The Poet’s Calling by Mark Eisner in “Poet of the People.” Kunkel notes, “In his concern with the suffering of universal or common humanity and in his celebration of the humble common pleasures partaken of by everybody—profane sacraments of weather, landscape, food, drink, sex, love, friendship—Neruda becomes a communist, small ‘c,’ and therefore a Communist in opposing the ancient, ongoing scandal of class society.”

Rachel Syme explores how Dietland, on AMC, serves up a revenge fantasy for the era of #MeToo in “Getting Even.” “This is not just a show about strong women– written and directed by women– but a show about women under attack, about systematic abuse, and what happens after those abused reach breaking point,” writes Syme. “In fact, Dietland feels like a show so attuned to the current moment that it is hard to believe that it went through the standard slow churn of television development.”

The entire July/August 2018 issue of The New Republic is available on newsstands and via digital subscription now.