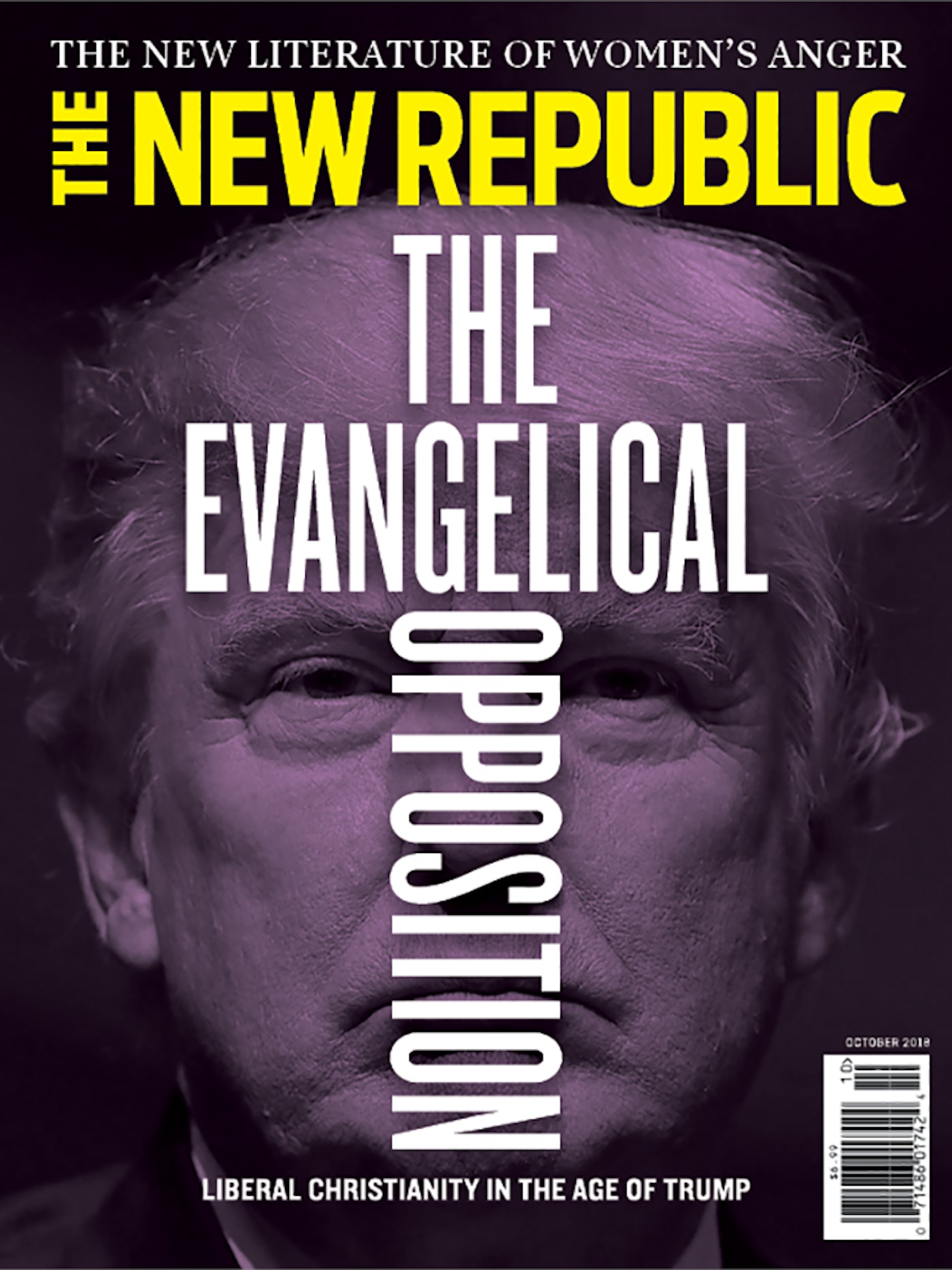 New York, NY—(September 20, 2018)—The New Republic today published its October issue, which features an incisive cover story by Bryan Mealer that explores a liberal’s search for God and faith in a divided country. In “The Struggle for a New American Gospel,” Mealer declares, “To defeat hatred and creeping fascism and begin the healing of this nation, we—all Americans—need a new social gospel, and not just one that makes liberals feel comfortable.”

Additional information about the October 2018 issue is included below.

In “Israel’s Season of Discontent,” Joshua Cohen questions whether the Jewish State has abandoned the American diaspora seventy years after its founding. Cohen writes, “To be sure, Netanyahu feels as betrayed by American Jewry as American Jewry feels betrayed by him, and it’s difficult to tell to what degree these feelings have been motivated by disgust and spite (Netanyahu hating American Jewish naivete, American Jews hating Netanyahu’s cronyism and violence), and to what degree they’ve been motivated by opportunism and self-interest (Netanyahu wanting the evangelical money and political cover, American Jews wanting to shore up their credentials on the identitarian left).”

Scott Sayare explores whether French security law has turned holding Islamist ideas into proof of a crime. The association de malfaiteurs terroriste statute, loosely translated as “terrorist criminal association,” remains the primary tool of counterterror magistrates today. Sayare notes in “Terrorist by Association,” that “Civil libertarians have long argued that association de malfaiteurs terroriste criminalizes ideas” and that France has never taken these criticisms particularly seriously. He continues, “Thousands of Islamists have been arrested and many hundred convicted under the association law, and French security and intelligence officials long hailed the statute as the reason that since 1995 not a single Islamist attack had been carried off on French soil.”

In “Best Coast,” David Sarasohn explains how the West Coast’s early conservatism has caused Democrats from the region to be uniquely suited to challenge President Trump. Sarasohn argues that because “The West Coast has created a platform that is almost the polar opposite of Trump’s xenophobia, protectionism, and environmental carelessness,” West Coast Democrats have a real shot at the White House in 2020.

Lee Drutman examines how much the Democrats will have to compromise the party’s liberal economic and social principles in order to win a House majority in “A New Suburban Strategy”. The party could safely move left on economic issues and still win suburban voters, believes Drutman. Instead, he observes, “in these pivotal suburban swing districts, the party has consistently supported corporate-friendly candidates who can raise tons of money (often because they have personal networks of wealthy friends and business associates) and who present a ‘moderate’ face to upscale suburban voters”.

“Going for Broke” by Alexander Sammon questions how accurately a candidate’s personal debt indicates a lack of fiscal responsibility in an age when about 80 percent of Americans owe money. “The sheer ubiquity of debt may have begun to change how Americans see the issue—as a structural condition more than a personal failing—and therefore how they see candidates who owe money,” Sammon considers.

Bryce Covert explores the enduring scam of corporate tax breaks in “Long Cons”. “Ultimately, these deals aren’t just about corporations looking to get a windfall where they can,” Covert explains, “It’s politicians, too, who, through their desire for a quick and easy win, end up robbing their constituents of money that could be much better spent elsewhere”.

In “What Trump Gets Right on Trade,” John B. Judis claims there is an important truth behind President Trump’s attack on globalization. “Globalization has undermined the fundamental promise of liberalism: to provide economic and social security and upward mobility,” states Judis.

Geoffrey Wheatcroft analyzes the potential outcomes for the United Kingdom during the uncertainties that surround Brexit. In “The Trouble With Brexit,” Wheatcroft states “Brexit could bring a new golden age of prosperity—or British industry grinding to a halt,” but most likely “a lot of political grandstanding”.

“All the Rage” by Rebecca Solnit  explores what the literature of female anger can achieve by examining three new books, Rage Becomes Her: The Power of Women’s Anger by Soraya Chemaly, Good and Mad: The Revolutionary Power of Women’s Anger by Rebecca Traister and Eloquent Rage: A Black Feminist Discovers Her Superpower by Brittney Cooper. Solnit writes, “These books arrive at a moment when a lot of women have changed and too many men have not—and some are, in fact, retreating into revved-up misogyny and rage against the erosion of their supremacy. Women no longer obliged to please men may finally be able to express rage, because we’re less economically dependent on men than ever before, and because feminism has been redefining what’s appropriate and acceptable”.

David Sessions reviews A History of America in Ten Strikes by Erik Loomis, which examines the American workers’ struggle to pair militancy with political power. In “A More Perfect Union,” Sessions explains that what Loomis’s book perhaps does best is “remind us that the promise of the labor movement, despite its many failures and compromises, has always been to make everyday life more democratic. American labor militancy has always been about more than pay, with workers seeking respect and fairness in the workplace.” He concludes that in order for a twenty first-century labor movement to succeed, it will need to “revive that promise, and show sidelined, disaffected Americans that democracy begins at work”.

In “The Crack-Up,” Rachel Syme explores how BoJack Horseman, a cartoon sitcom whose title character is a melancholic, middle-aged stallion, brilliantly reckons with grief. Syme notes that “Midway through the show’s new season, BoJack (voiced by Will Arnett) wears a charcoal suit and stands at a pulpit next to a coffin. His mother has died. For over 20 full minutes, with no interruption, he delivers a brilliant, pained, rambling eulogy”.  At the end of the eulogy, she continues, “he looks up, and we finally see his audience: a confused-looking room full of reptiles, icking their tongues. He is in the wrong funeral parlor. The ordeal sends him on a long bender, a dizzying descent toward tragedy. But for a moment, the show conveys all the ache of another person’s loss, whether he is man or beast”.

“Personality Clash” from J.C. Pan examines the uses and abuses of the Myers-Briggs Type Indicator (MBTI) by looking at The Personality Brokers: The Strange History of Myers-Briggs and the Birth of Personality Testing by Merve Emre. How did the MBTI establish such wide appeal? Pan notes that according to Emre the answer lies in its early-twentieth-century roots and is both by design and in practice, a tool of workplace management. He concludes, “Maybe after all this time, the significant distinction between types isn’t between the Is and the Es, or the Ps and the Js, but between those who engineer our workplaces for productivity and those who must engineer our personalities to fit them”.

“Bad Faith” by George Scialabba answers the question of whether atheists think too much like believers by exploring Seven Types of Atheism by John Gray. Scialabba writes, “God’s inexplicable reticence has always made life difficult for theists. John Gray thinks that such problems with theism shouldn’t make most atheists any more confident about their own outlook ... Seven Types of Atheism
does not offer a rigorous or exhaustive taxonomy of nonbelief. The seven sections mainly provide a convenient way of organizing Gray’s likes and (more often) dislikes”.

In “Divided States” Michael Kazin delves into Jill Lepore’s new book, These Truths: A History of The United States, and how it captures a history of American contradictions. “For [Lepore], the United States has always been a nation wrestling with a paradox, caught between its sunny ideals and its darker realities,” writes Kazin. He continues, “Throughout the book, Lepore takes particular delight in tracing how both Americans with power and those without made effective use of new forms of media either to advance the ideal of equality or to betray it”.

Poems by Tess Taylor and Jericho Brown are featured this month. For Res Publica, Editor-in-Chief Win McCormack explores individual freedom and the public square in “False Concepts of Liberty Pt. 2”.

The entire October 2018 issue of The New Republic is available on newsstands and via digital subscription now.