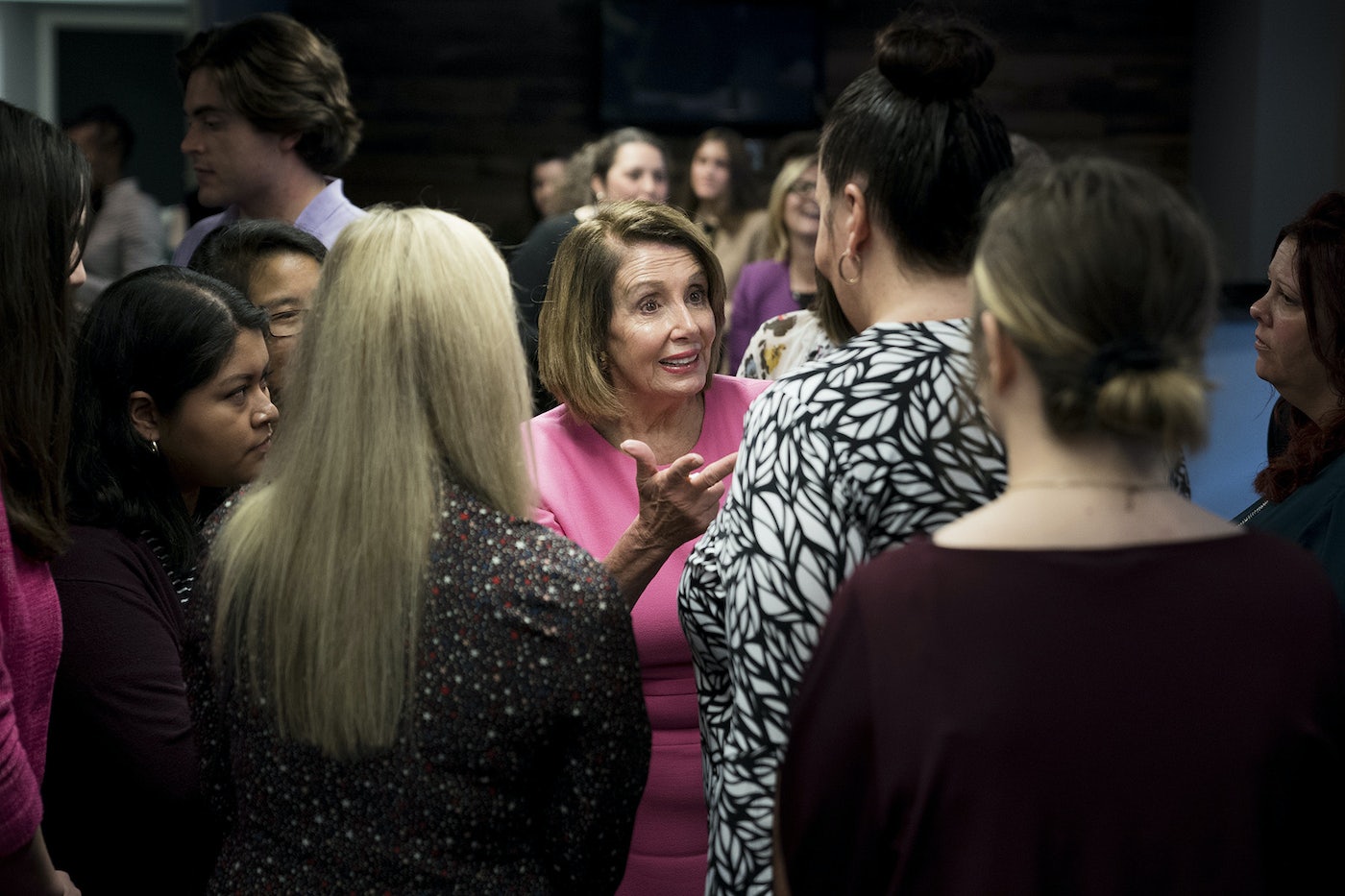 In the great 1972 political satire The Candidate, Robert Redford plays a novice candidate who runs a slick campaign for Senate and wins an upset against an unbeatable incumbent. On election night, right before the media throng arrives, he turns to his campaign guru, played by Peter Boyle, and says, “What do we do now?” The movie ends without an answer.

House Democrats are no strangers to governance; even with the influx of newcomers, they have a veteran group who have been in the majority before, many under both divided and united government. But the question of what do we do now is still a pressing one, since the dynamic in today’s Washington is unlike any they—and the country—have ever seen.

Party leadership contests will come quickly, followed by the need to draft a rules package that sets out how the House will operate, from floor procedures to ethics considerations. Chairmanships of key committees and subcommittees will need to be settled. And an agenda, substantive and investigatory, should be laid out before the new House convenes on January 3. At the same time, Democrats have to prepare for the possibility of a lame-duck session in which Republicans try to do some mischief, like a resolution on the “caravan,” before they are pushed into the minority.

Of course, they will have to begin with the Trump administration, and the business of keeping it from pushing the country closer to autocracy, extending its kleptocratic corruption and the form of government known as kakistocracy (“rule by the worst”). Next comes establishing an agenda and a set of messages that show Americans why they are worthy of the mantle of governance, now and for the presidential contest in 2020.

The desire for generational change and new blood is understandable. But image and public presentation are only a small part of the qualities needed in a speaker. The ability to shape and carry out an agenda; to give committees and subcommittees freedom while maintaining coherence; to understand the needs, strengths, and weaknesses of the members, knowing when to push and when to back off; to have tactical and strategic skills, especially when showdowns like potential shutdowns are looming; to negotiate effectively with a president and leadership counterparts in both House and Senate—all these are deeply important qualities in a speaker. Simply being young and fresh, or being able to speak to white working-class voters, or fitting demographic checklists, or being good on television—laudable political traits all—are not attributes that alone meet the standards set by Nancy Pelosi.

It is also important to make sure that there is strong leadership input into key committee and subcommittee chairmanships. The strongest members—those who know how to advance an agenda, question witnesses, assemble crackerjack staffs, and who have intellectual heft—should be in charge of the most important committees, and there should be early and regular consultation with leaders to coordinate priorities, especially for investigations and oversight. This does not mean that party leaders would be dictating schedules and agendas; they’d simply be coordinating strategies and letting the committees and subcommittees take charge.

For many decades, Congress has provided orientations for its new members. These used to be bipartisan, including a wide range of experts who taught newcomers the rules of how Congress works. After Newt Gingrich’s speakership in the 1990s, they became more partisan and generally less effective. The Democrats will need a much more robust orientation for members, new and otherwise, who have never served in the majority—and the same for staff. There should also be training about how to conduct investigations—there’s going to be a lot to investigate—how to do oversight, how to ask questions of witnesses, and how to use the alphabet soup of resources available to Congress, from CBO to GAO to CRS.

Congress may have its problems, but the real fight against corruption and autocracy is with the Trump administration.

About those rules—they’re going to change. New members are going to want Congress to evolve, as is their right. But the rules have to be fair, constructive—and practical. In a larger sense, many reformers want a return to “regular order”: more openness in committees and on the floor, more regularity in debate and markups, more ways to encourage actions that are bipartisan. A rules package means more than floor procedures, though. Allowing members to pool staff allowances, a rule Gingrich abolished in 1995, would help. Just as important, a new majority needs to increase staffing and budgets for both members and committees, and especially to add experienced investigators. By empowering the independent Office of Congressional Ethics and Office of Compliance, they can do better with complaints of sexual harassment or misconduct, and put much stronger limits on stockholdings and board memberships for lawmakers. And legislatively, Democrats should reestablish the Office of Technology Assessment, an important source of expert scientific information and reform.

Congress may have its problems, but the real fight against corruption and autocracy is with the Trump administration. The Democrats have to pass a bill protecting Robert Mueller from Trump’s efforts to fire or undermine him, and get the Democrats in the Senate to pressure the majority to take it up. Find ways to make sure there is access to any reports written by Mueller and his team. Give Adam Schiff, the incoming chair of the House Intelligence Committee, the resources to dig aggressively into Russian connections and to protect whistleblowers and the integrity of the intelligence services. Make sure Ways and Means under Chairman Richard Neal acts swiftly to gain access to Trump’s tax records. Begin a process to reform the Inspector General Act, ensuring a president cannot sideline or corrupt that independent process. Change the Federal Vacancies Reform Act to prevent its misuse. Use the Committee on Appropriations under Nita Lowey to conduct tough-minded oversight of agencies and programs. Give Jerry Nadler, the incoming chair of the Judiciary Committee, the resources to examine all of Trump’s actions, and those of the Justice Department.

At some point, Democrats will again hold the House, Senate, and presidency. A reform agenda should include a new and improved Voting Rights Act along with actions to make voting easier, including universal voter registration and preregistration, moving Election Day to the weekend, blocking a “citizenship test” for federal elections that is designed to suppress votes, and requiring a paper trail for ballots. A bill to end partisan gerrymandering, and one to repeal the 1967 law that requires single-member House districts, to allow for states to experiment with multi-member districts, should be parts of it. Campaign finance reforms to encourage small donor contributions with matching funds, along with a renewed tough DISCLOSE Act, to oversee spending, round out a “democracy package.” A requirement that presidential candidates disclose their tax returns would also be in order.

To be sure, the first priorities for Democrats are more triage than anything else—preventing Donald Trump from further destroying the health insurance marketplace, degrading the environment, shredding the safety net, and undermining worker safety, the census, voting rights, and so on. But Democrats should also focus on what priorities the party would adopt if it did take over in 2020. Few new laws will be passed in 2019. Still, Democrats can lay down markers for the future—adjusting the Affordable Care Act to extend to more Americans and to work better; creating and protecting jobs; assuring adequate incomes for working-class Americans; implementing training programs and appropriate apprenticeships to provide skills for workers in a swiftly changing global economy; crafting a safety net appropriate for a future world where more jobs are part of the gig economy than the traditional one in which employers provided the benefits; framing a trade policy also appropriate for the new global dynamic; dealing effectively and realistically with climate change and crafting a new alternative energy approach; dealing with cybersecurity dangers; restoring net neutrality. And Democrats need a budget that reflects their values and still addresses the exploding debt crisis caused by Republicans through irresponsible tax cuts.

Whatever bills pass the House, even if they go nowhere in the Senate, Democrats can highlight their plans through the creative use of the House floor. Structured debates—not always pitting Democrats against Republicans—could show Americans that there are thoughtful and workable proposals out there, some of which are not partisan. Excerpts can go on YouTube, providing the fodder for cable news and showing the public that Democrats actually have ideas to grapple with the problems this country faces.

Norman J. Ornstein’s latest book is One Nation After Trump: A Guide for the Perplexed, the Disillusioned, the Desperate, and the Not-Yet Deported.