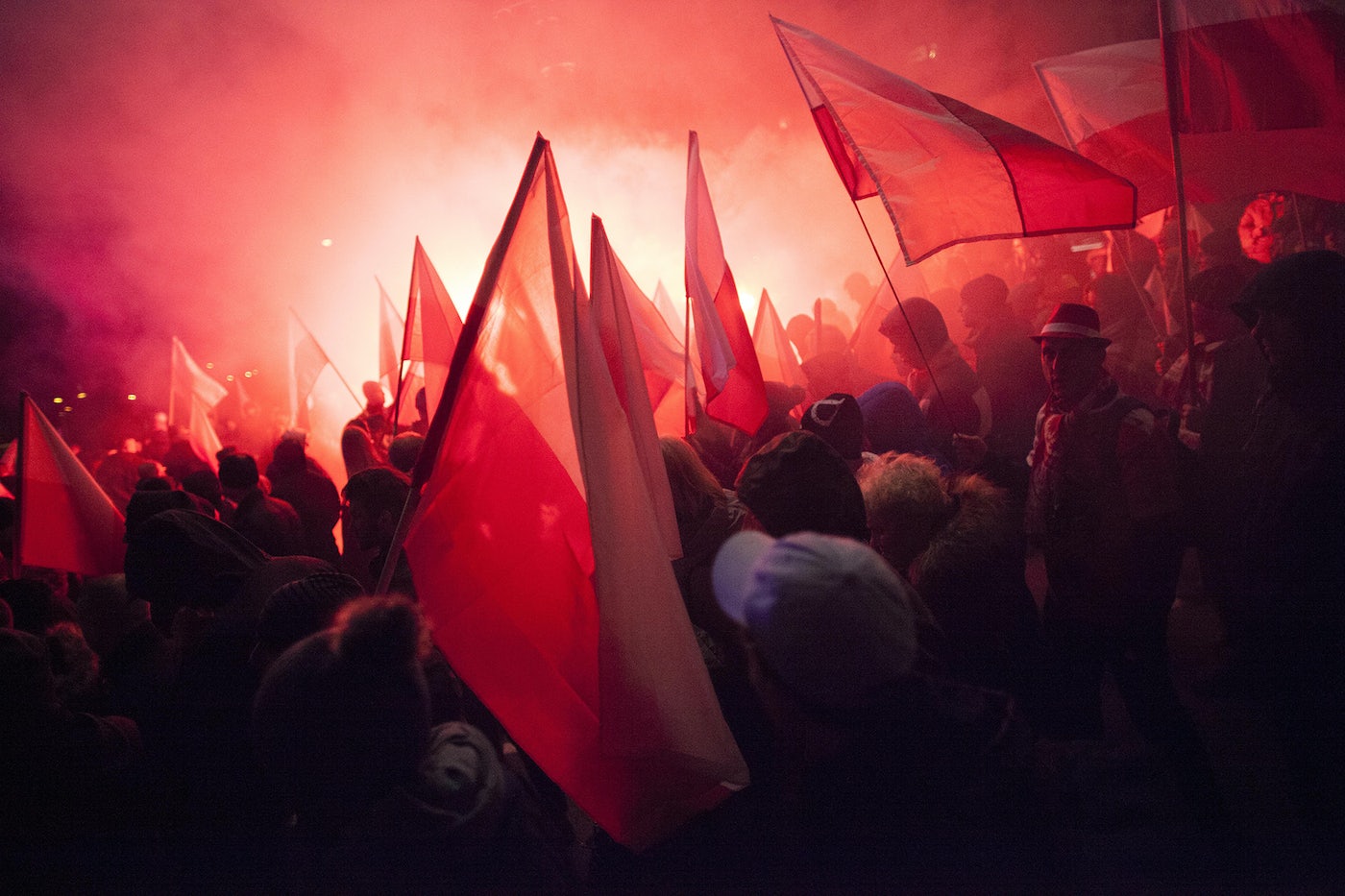 Early on Sunday morning, dozens of buses set off from every region of Poland, carrying tens of thousands of patriotic Poles to the capital for the centenary celebration of the country’s independence from imperial powers.

At 4 a.m., a crowd waiting in Legnica, near the German border, was met by Piotr Borodacz, a local far-right activist who had organized two buses for the 100 people who’d asked to join him on the trip. They made their way west through Silesia—a region transferred to Poland from Germany after WWII—picking up passengers along the way.

The mood was combative. Days before, Warsaw’s mayor Hanna Gronkiewicz-Waltz had announced a ban on the annual Independence Day march, which since its inception as a fringe gathering for nationalists in 2009 has grown into a magnet for far-right groups from across the globe. The annual event is organized and promoted by radical nationalist groups, and the presence of white power slogans at last year’s march prompted alarmist headlines about the rise of fascism in Poland and left the government scrambling to avoid such scenes on the centenary.

“Poland and Warsaw have suffered enough from aggressive nationalism,” Gronkiewicz-Waltz, who represents the opposition Civic Platform party, wrote on Twitter. “This is not how the centenary of independence should look.” Yet the following day, the ban was overturned by a Warsaw court for infringing upon the right of assembly, and the way was cleared for nationalists to monopolize commemoration of Poland’s biggest celebration in recent memory.

The ruling Law and Justice party in Poland has spent years rallying nationalist passions for political gain. Since its election in 2015, it has elicited the support of groups disillusioned with Poland’s post-1989 trajectory, emboldening some of their most radical members.

Yet the far-right populism they stoked seems to be slipping beyond their control. “There was enough time to address this problem, to prepare these celebrations in a way that upholds the dignity of the state and its democratic identity,” said Rafal Pankowski of Never Again, an organization which monitors nationalism in Poland. “But the government lacked the courage.” Faced with the prospect of thousands of nationalists marching through Warsaw without official oversight, the governing party found no alternative but to join them.

Borodacz’s group arrived in Warsaw around noon after an eight-hour drive, sleep-deprived but energized by the scenes unfolding outside the bus windows. Some 200,000 people had descended on the city center, according to official figures released during the march, carrying Polish flags and armbands with the logo of the Home Army, a wartime resistance movement. Some were decked out in historical military uniforms. Every few seconds, the deafening bang of a flare could be heard.

Borodacz and his friends wove their way into the crowd, and moments later stood shoulder to shoulder with thousands of fellow Poles and activists—from members of far-right groups like Italy’s Forza Nuova to Polish families on day trips with their kids—to hear President Andrzej Duda declare the event open.

“I want us to march together beneath our banners, in an atmosphere of joy,” Duda said, his voice echoing through speakers that towered above the crowds. “Let this be a march for everyone, one which everyone wants to join and at which everyone feels good.”

But the Poland that marked its centenary on Sunday is a bitterly divided nation. Conflicting with official police statistics, at least one independent watch group claims hate crimes have skyrocketed in the past few years. Feuds over the country’s past and present, waged over the airwaves of state-owned TV, on social media, and on the streets of Poland’s cities, spilled over into mutual recrimination as the big day drew near. In the morning, steps from where Duda delivered his address, Gabriela Lazarek and fellow members of the opposition group Citizens of Poland unfurled a banner with an image of emaciated children at a Nazi concentration camp. “This is how nationalism ends,” it read.

Marchers clad in Polish colors cast distasteful sideward glances at the banner as they passed, and some accused the opposition activists of betraying Poland and pandering to the European elites many of the marchers see as undermining Polish sovereignty. It was an ugly scene, but one that Lazarek—who organizes regular opposition rallies in her home town of Cieszyn—has become used to.

“For me, this is a day of national mourning,” she said, reflecting on the divisions that have riven her country. “I feel terrible, and I never thought I’d feel this way today.”

Beside the spot where she stood was an improvised memorial to Piotr Szczęsny, a man who committed suicide by immolation to protest the politics of Law and Justice in 2017. The party stands accused by critics at home and abroad of curtailing Poland’s media, purging its courts, and reversing the country’s progress as a democratic state in the 30 years since it emerged from Soviet domination. Lazarek said she had come to stand watch beside the memorial and defend it from attacks by the far-right.

With no national symbols and no Polish flags, she and her supporters stood out in a city center bathed in red and white. Lazarek felt the symbols associated with her country had been distorted and co-opted by radical groups she wanted nothing to do with. “As long as the words ‘death to the enemies of the motherland’ are displayed below that flag,” she said, citing a nationalist slogan prominent among the marchers, “I am not going to wear it.”

With moderate male supporters of Law and Justice comprising the bulk of the marchers—some with wives and kids in tow—the event remained tamer than Polish officials had feared. The far-right All-Polish Youth burned an EU flag, and video surfaced online of racist and homophobic chants. But those and other incidents, in both severity and number, paled in comparison to scenes witnessed in 2017.

Yet long after sunset, when the vast crowd congregated before a stage outside the National Stadium to hear speeches by the leaders of the far-right movements which hosted the march, the mood shifted.

“Independence means Poland’s sovereignty from foreign capitals—from Moscow, from Berlin, from Washington,” National Movement leader Robert Winnicki told the crowd. “The dictatorship of the 21st century is the dictatorship of globalists.” The crowd erupted into nationalist chants.

“Independence is freedom from those who want to destroy our healthy Polish Christian traditions,” he continued. “And today in the name of independence we must declare decisive war against that whole rainbow gang which wants to corrupt our youngest generation.” The leader of the National-Radical Camp, another group affiliated with the National Movement, thanked Forza Nuova and other far-right activists from across Europe from coming to Poland for the march.

Around 9 p.m., when the speeches were over, Borodacz and his friends packed a pizza restaurant not far from the stadium. This had been the largest Independence Day march they’d ever attended, and half of the people who had joined Borodacz had come for the first time. Many said they’d attend again.

Borodacz took a seat at the largest table, and ordered a beer. He seemed energized by the speeches he’d heard. He has long believed it was time for Poland to stand up to the European “elites” and defend its national identity from liberal advocates of gay marriage, immigration, and other measures he believes pose a threat to the health of his nation.

“We live in a Europe that’s moving towards a single state, a single army and a single constitution. How do you convince people to come on board with that?” he said. “You destroy patriotism and discredit it in those countries, you distance people from the values of their ancestors, from God and Christianity, you promote multiculturalism and leftist ‘values’, you liquidate the traditional nuclear family and you push people into a life devoted purely to consumerism.”

He took another slice of his pepperoni pizza and a sip of his beer. “But this is about something bigger. I believe the big conflict being waged in Europe and the attacks from European elites concern competing visions of the world,” he added. “I believe they are fighting patriotism.”

Matthew Luxmoore is a Moscow-based journalist who writes about Russia and eastern Europe.