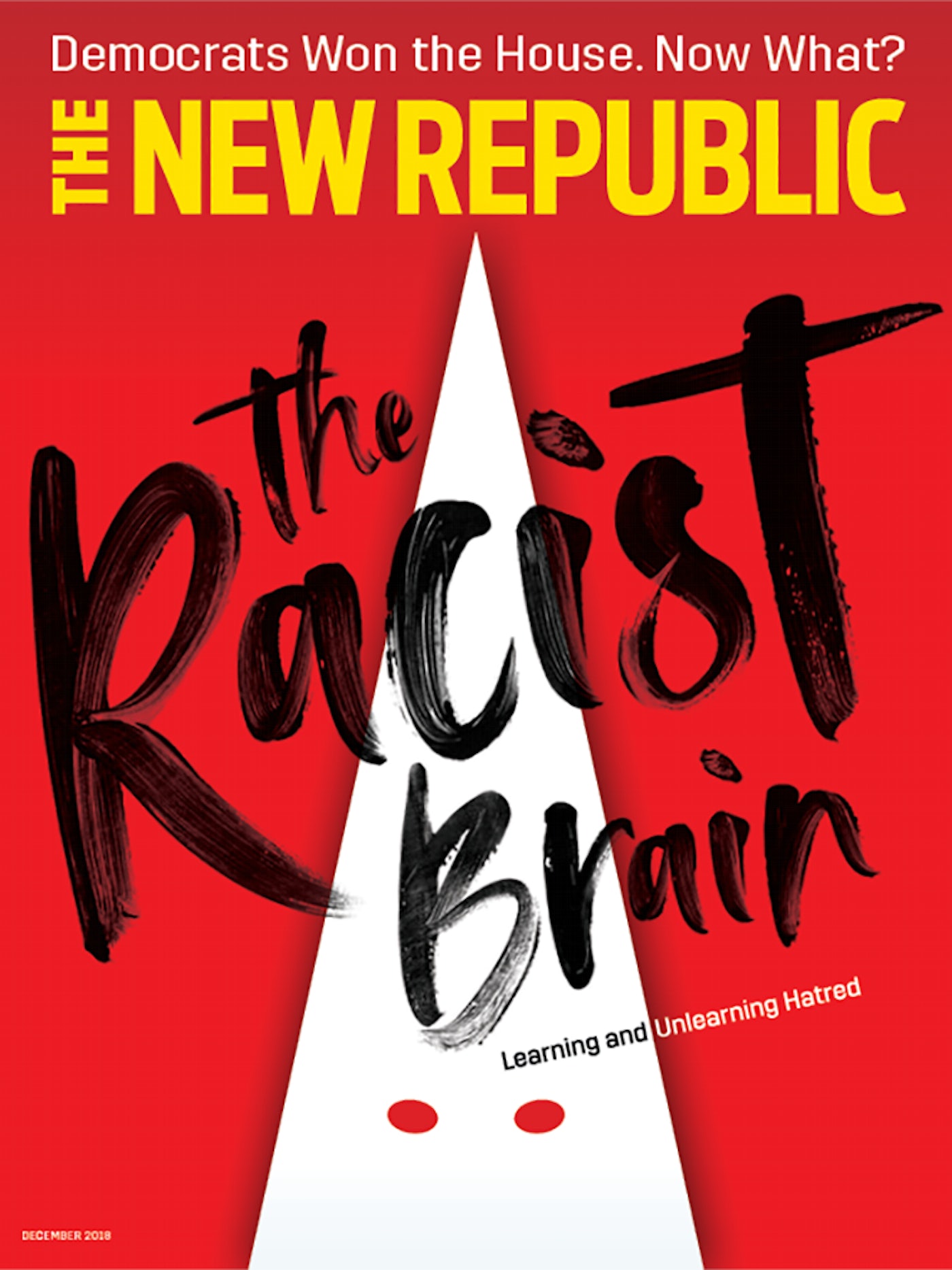 New York, NY—(November 27, 2018)—The New Republic today published its December 2018 issue, which features an incisive cover story by Erika Hayasaki that explores what neuroscience can explain about the persistence of hatred. In “The Pathology of Prejudice,” Hayasaki examines new activist groups founded by former white supremacists to help people leave racist communities. Can they help people in the KKK abandon hate? It’s not easy. “Hate is a powerful emotion that lodges itself deep within a person’s psyche,” she observes. “Once racial biases and hateful ideologies embed themselves in a person’s brain, they can be difficult—if not impossible—to counteract.”

Additional information about the December issue is included below.

Boyce Upholt analyzes the disastrous effects that Monsanto’s new herbicide, dicamba, is having on American farmers. The story starts with a dispute in Arkansas, in which one farmer murders another over the use of the chemical. As Upholt explains in “A Killing Season,” dicamba is supposed to protect farmers against financial ruin. However, the product’s effects on the land are so detrimental that disagreement about its use has grown intense. “Tensions over dicamba remain high, and more violence seems possible,” Upholt writes. “One farmer at the center of the controversy said he keeps three loaded guns in his office.”

“Who to Believe?” looks at the trial of a therapist in New Hampshire who stands accused of sexually molesting a young patient.  The article questions whether or not evidentiary requirements help or harm the pursuit of justice in cases of sexual assault. As Benjamin Rachlin points out, most states and the federal government do not require corroborating evidence, yet in actual practice, if victims want to be taken seriously by officers and prosecutors, they are, in effect, required to produce some form of corroboration. “Wasn’t it vital to treat victims more decently, and didn’t that mean believing them?” Rachlin asks. “But how far was it right to extend that principle—and given the presumption of innocence, weren’t our laws designed not to?”

In “Starting From Scratch,” Micah L. Sifry examines the party outsiders who built a movement stronger than President Obama’s. Sifry argues, “The most notable aspect of Democratic midterm organizing in 2018 was that it operated without any central command.” The traditional electoral organization has now spread out to dozens of independent national groups and thousands of local ones, most of them completely new and not directly connected to the party.

“Grand Old Paranoia” evaluates how Republican conspiracy theories have warped Washington. “Increasingly, it seems, the only way for the right to hold power is to pretend they lack it, a paradoxical state of affairs,” Colin Dickey writes. “They are now clinically paranoid: Unable to determine real threats from imagined ones, or to assess their own status accurately, conspiracy is all they have left.”

Janell Ross asserts in “Voting Right” that free and fair elections are an issue Democrats can run on and win on. Though the Voting Rights Act of 1965 was passed to prevent voter suppression, efforts to keep people from voting have intensified. “Democrats must fight for access to the ballot, and for the federal oversight necessary to assure it,” Ross argues. “Their House majority cannot be otherwise sustained.”

“Drifting Toward Dictatorship” questions why Brazil elected a who implies he wants to bring back military rule. Andre Pagliarini believes the simple answer is Jair Bolsonaro’s attractive agenda to resolve the country’s economic problems. “To the poorest Brazilians, Bolsonaro has promised gainful employment and the preservation of their government benefits; to the middle class, a return of the status they lost while the left-wing Workers’ Party was in power,” Pagliarini explains, “and to the wealthiest Brazilians and investors, open markets, less stringent labor laws, and lower taxes.”

In “Republicans Broke Congress,” Norman J. Ornstein declares that Democrats need a plan to fix the legislative body. “Congress may have its problems,” Ornstein acknowledges,  “but the real fight against corruption and autocracy is with the Trump administration.” Though Democrats may have won the House, there is still a formidable set of requirements to put the country right and set the stage for 2020.

In “Forget About Passing Legislation,” K. Sabeel Rahman advises House Democrats to focus on building a better, more inclusive party in the years leading up to the 2020 election: “Even if they are never passed, ambitious proposals can shift the values within the party and serve as trial runs for broader change in 2020 and beyond.” Rahman argues that Democrats may need to sacrifice some fights in this next Congress in order to make a better party and a better country.

Gordon S. Wood considers how two books—No Property In Man: Slavery and Antislavery At The Nation’s Founding by Sean Wilentz and The War Before The War: Fugitive Slaves And The Struggle For America’s Soul From the Revolution to the Civil War by Andrew Delbanco—offer new perspectives on the events leading up to the Civil War. As Wood writes in “Battle Lines,” Wilentz sets out to demonstrate that the Constitution did not enshrine slavery as abolitionist William Lloyd Garrison had claimed. Meanwhile, Delbanco focuses on the fugitive slave laws that hastened the breakup of the Union. Wood notes that both writers “hold out the hope that the Constitution, flawed as it may be, can be the instrument for doing the right thing.”

Evan Kindley reviews the new biography Born to Be Posthumous: The Eccentric Life and Mysterious Genius of Edward Gorey, by Mark Dery, who examines how Edward Gorey has become a hallmark of popular culture. In “Strange Ambitions,” Kindley writes that Dery’s book describes Gorey as a shy man known to the outside world only by his eccentric ways. “He was also, more than we tend to think, an artist of his time. While the popular conception of Gorey is of a man born 50 years too late ... he saw himself as working in the tradition of the twentieth-century avant-garde.”

“Unchecked Power,” by Ganesh Sitaraman, examines how monopolies have flourished and undermined democracy over the past 40 years by looking at The Curse of Bigness: Antitrust In The New Gilded Age, by Tim Wu. As Sitaraman points out: “Three major airlines dominate the skies. About ten pharmaceutical companies make up the lion’s share of the industry. Three major companies constitute the seed and pesticide industry. And 70 percent of beer is sold to one of two conglomerates.” Sitaraman’s sweeping account “captures the stakes in the battle for antitrust—and it cuts to the heart of one of the central questions of our time: Can democracy survive?”

New York Times best-selling author Mychal Denzel Smith reviews If Beale Street Could Talk, Barry Jenkins’ film adaptation of the James Baldwin film of the same name. The movie deals with many emotional subtleties, Smith writes in “Finding A Way,” and “it took a delicate hand to ensure these somewhat competing truths did not break the narrative apart.” That has something to do with Jenkins’s talents: “He provides space for his character’s flaws while never allowing those flaws to define them.”

In “The Activist’s Dilemma,” Lauren Oyler investigates Idra Novey’s political thriller Those Who Knew, about activists, dissidents and politicians living on an unnamed island nation during the first years of its democracy. The novel follows Lena, who, like other women in Novey’s novels, has good intentions but gets trapped in the details. As Oyler notes, “Novey wants to draw out the prejudices, fears, and desires that are bound up with political impulses—to see whether an individual can ever untangle those knots.”

In “Dystopian Chic,” Rachel Syme explores how Homecoming, a new psychological thriller series starring Julia Roberts, uses set design and cinematography to enhance the tense, unsettling nature of the show. Syme describes the Homecoming facility, a pharmaceutical conglomerate contracted by the government to treat soldiers returning from combat, as “too manicured, too monotone, too minimalist.” As Syme notes, “everything inside Homecoming is angular, from the geometric art to the Escheresque wall tiles. Everything is lit like the Valencia filter on Instagram, with a wash of avocado green and a hazy golden glow. Nothing here is comforting.” According to Syme, Homecoming’s series creator and director Sam Esmail uses the eerie aesthetics of the show to highlight capitalism’s inherent creepiness.

The entire December 2018 issue of The New Republic is available on newsstands and via digital subscription now.