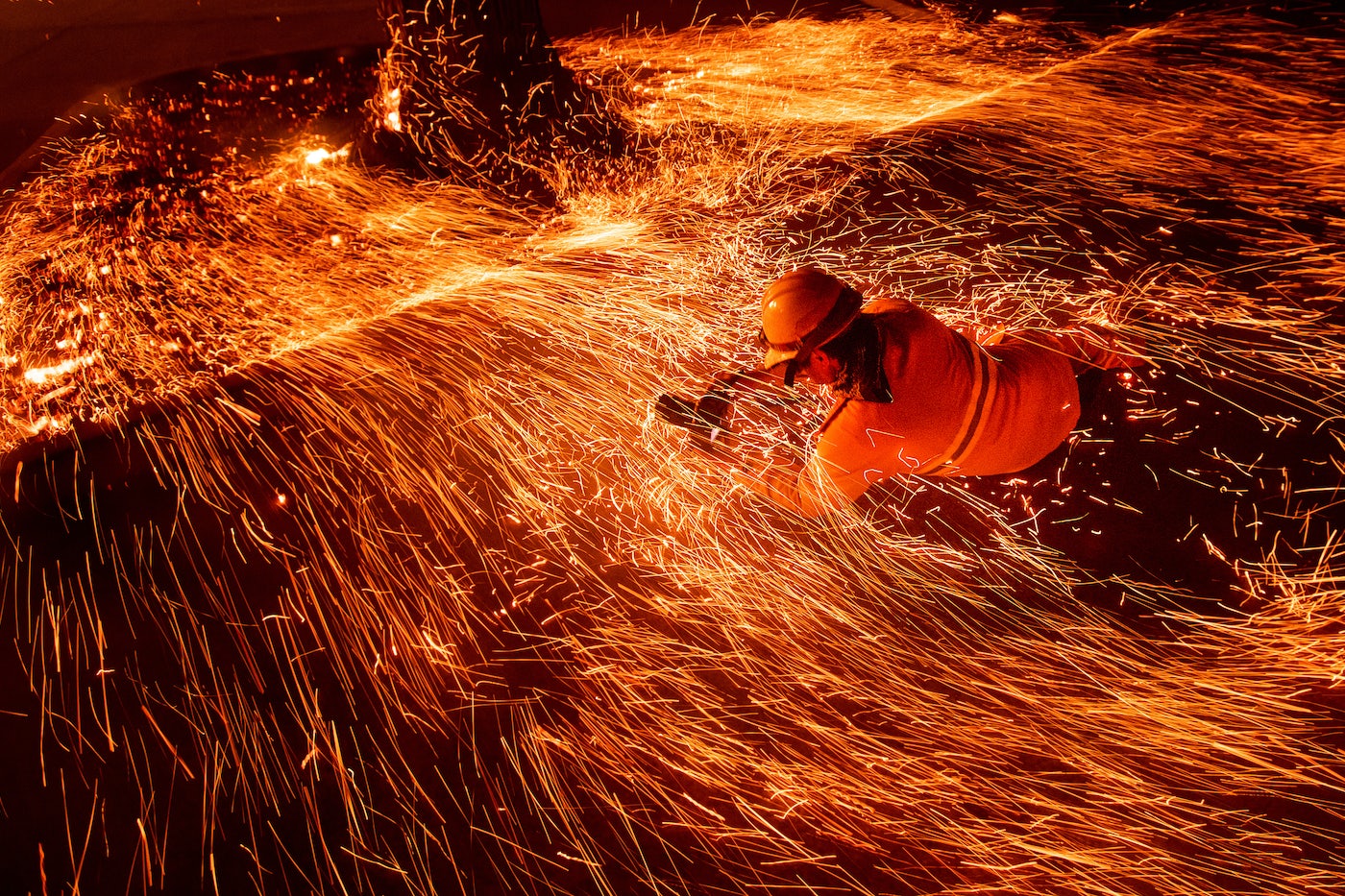 Justin Sullivan, a photojournalist with Getty Images, was watching a KFC restaurant burn to the ground in Paradise, California, when he decided to lay down and take a picture. Thousands of tiny embers flew toward his face as he steadied his camera. Noah Berger, an Associated Press photojournalist nearby, saw Sullivan’s bold move and decided to snap a picture of his own.

It’s hard to say which image is more impressive. On one hand, crouching amid the hot sparks allowed Sullivan—whose photo is below—to capture not only the physical damage from this year’s historic Camp Fire, but the sheer force and speed of its winds. That’s an impressive feat for still photography. (The November wildfire, which killed 88 people and destroyed more than 12,000 structures, saw gusts of up to 60 miles per hour, akin to a strong tropical storm.)

But Berger’s photo, featured atop this article, nudges the viewer toward a gut-wrenching realization: There are people in there. Of course, he and Sullivan had chosen to be in there, protective gear and all. But they didn’t know, at the time, that they would be inside what would become the deadliest and most destructive wildfire in California history. They were just doing their jobs.

Sullivan insists the embers photo looks a lot more dangerous than it actually was. “It’s not in my nature to put myself in a ridiculous situation where I’m teetering on the edge of life and death,” he said in a phone interview. But extreme-weather photojournalism has always been a dangerous profession, and is becoming more dangerous as climate change worsens. In 2018, photographers were sent to document some of the most extreme weather the country has ever seen—megafires, hurricanes, mudslides, and volcanic eruptions.

Scientists say disasters like these will flourish if the planet continues to warm. Extreme-weather photojournalism is thus becoming more important as it becomes more dangerous. The public must understand the consequences of inaction on climate change, and sometimes words just aren’t enough.

The increasing danger of reporting on storms like Michael “is not what I worry about,” Raedle told me. “It’s that we have to show people what’s going on.” Weather isn’t simply getting more extreme; it’s increasingly upending people’s lives. “When I’m in there, it’s not about whether you’re taking the best pictures,” he said. “It’s about having compassion for the people you’re taking pictures of, who have lost everything.”

Raedle remembers, for example, a woman named Kathy Coy, standing on top of the rubble that used to be her home. “She had no shoes,” he said. “She was trying to find her medicine. She was standing there on top of her completely destroyed home, trying to figure out how to put her life back together.

Taking photos of people suffering from such trauma is not an easy task. “You have to intrude into somebody’s life when they’re at their most vulnerable and emotionally spent,” said Pancho Bernasconi, Getty Images’ vice president of news. “They have to let you into their lives in that moment.” And some extreme weather events—like wildfires—don’t always lend themselves to human impact photos, because they normally burn far away from cities and towns. “You usually get people looking at fire from far away,” Sullivan said. “You don’t usually get people interacting with fire.”

This year’s Camp Fire—which tore through an entire town with little advance notice—was different. “It wasn’t your typical, ‘We need to be shooting 5 miles away on a hill’ situation,” he said. “This was an in-your-face, right-in-front scenario.” After the fire, photographers were also allowed to accompany mortuary crews on their search for dead bodies. “That’s never happened before,” Sullivan said. “Not in the 20 years I’ve been doing this.”

About a month ago, an article for the BBC argued that climate change has “an inherent image problem.” Polar bears, solar panels, and smokestacks spewing carbon dioxide are commonly used to illustrate the threat, but none of those images are compelling enough to convey how severe and catastrophic global warming will be if no action is taken to slow it down. “Images without people on them are unable to tell a human story,” Adam Corner, a psychologist and the research director of Climate Visuals, told the BBC.

Bernasconi agrees on the power of human-impact photos, and said he envisions more of that type of work from Getty’s staff next year. “It puts you in a place where you can imagine being in the middle of that moment,” he said.

We should all be imagining ourselves in these moments.