The New Republic Jan/Feb Issue: The Story of an Undocumented American Family 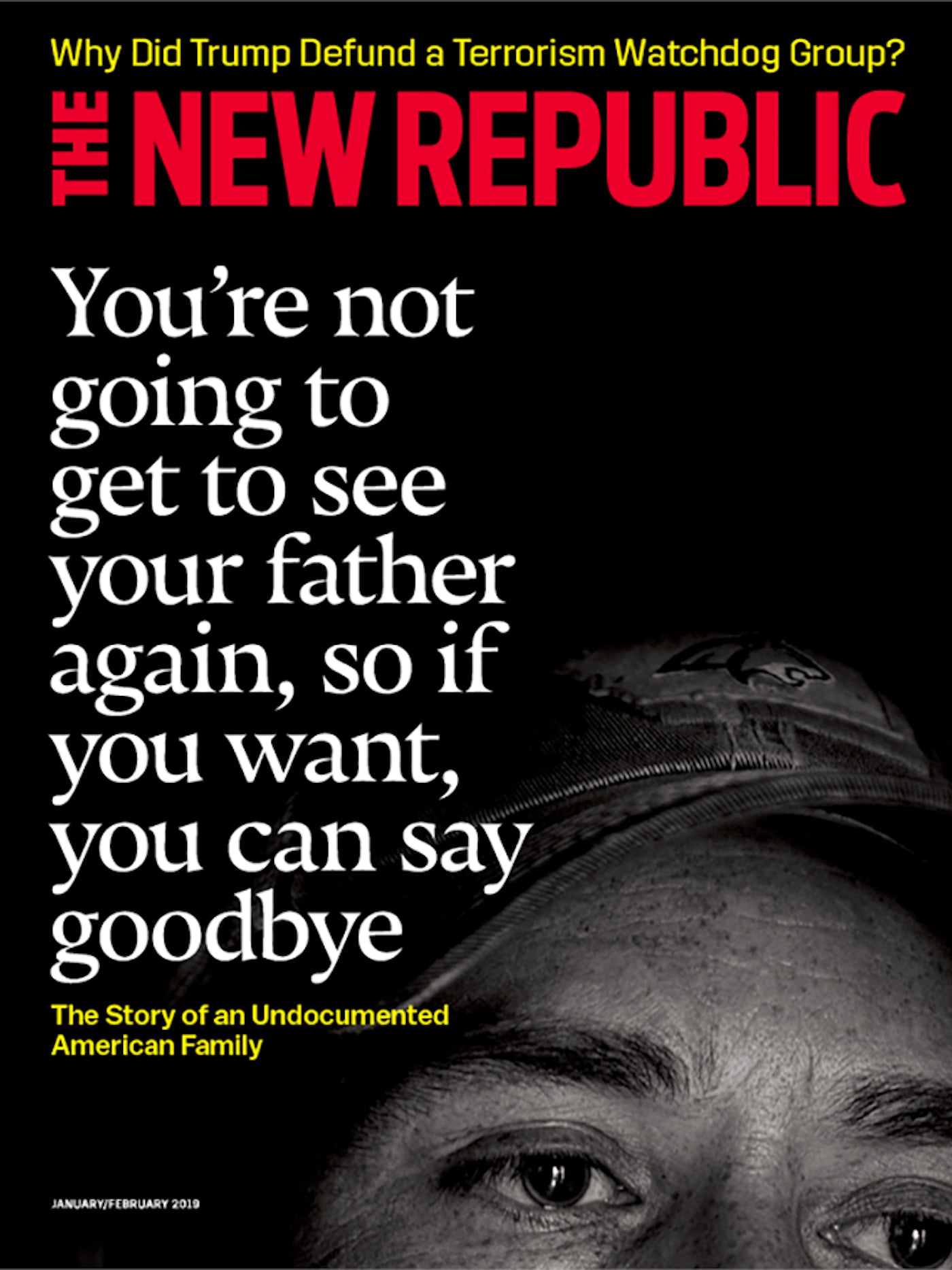 New York, NY—(December 27, 2018)—The New Republic today published its January/February 2019 issue, which features an incisive cover story by Elliot Woods. In “Jailed, Raped, Deported, Robbed,” Woods follows an undocumented man, Audemio Orózco Ramirez, who tries to return home after being separated from his wife and eight children by ICE. Trump’s executive order for ICE to take action on all known undocumented immigrants, criminals and noncriminals alike, led Ramirez to be jailed, raped while in prison, deported to Mexico and robbed at knifepoint in Tijuana. Woods explains that Audemio’s story is tragic only in its ordinariness, as there is “a generational failure to reform the American immigration system to ensure that people like Ramirez are able to live and work in the United States without getting caught up in an expensive, traumatic, and ultimately futile enforcement apparatus.”

Additional information about the January/February issue is included below.

“Mommy and Data” explores how “femtech” companies are marketing themselves to women worried about their fertility and questions if these startups are alleviating female anxieties or exploiting them. While these companies have empowered women, providing avenues to discuss desires, fears and experiences with friends and doctors while combating the stigma associated with infertility, Anna Altman asserts the science still cannot say with certainty when, how quickly, or if a woman will get pregnant. Therefore, Altman argues, “Femtech companies may be little more than a modern gloss on the health and beauty industry, applying a veneer of feminism to age-old appears appeals to women’s fears and insecurities.”

In “After South Africa’s Trump,” Eve Fairbanks discusses the striking parallels between South Africa a year after the fall of its demagogue ruler Jacob Zuma and how it could inform America’s future after President Trump. She writes, “maybe South Africa has something to teach America: how to react to a leader like Zuma, one whose hard break from the political status quo yielded outrages and disregard for the truth that seemed to amplify with each passing day. And what can happen when a society gets rid of such a man.”

Bryce Covert examines in “Opportunity Costs” how a tax loophole intended to help the poor, funnels money to wealthy investors. Covert explains the loophole is used by investors who fund projects in economically distressed areas deemed “opportunity zones” receive a sizable tax break, even on unrelated investments. President Trump, a promoter of the plan who accumulated at least $885 million in tax breaks, “may be the country’s preeminent expert in spotting a government handout and squeezing it for all it’s worth,” claims Covert.

“Trapped at the Border” questions if Trump’s new asylum policy, requiring immigrants to apply at official ports of entry, will turn Mexico into a holding pen for refugees. Lauren Markham details Mexico’s inability to accommodate the thousands of immigrants held on that side of the border for months at a time given the country’s limited resources and authorities’ organizational capacity. Markham states, “The government has struggled to feed, house, and clothe the refugees. Every day, thousands of people need to eat; they need medical care, jackets, and blankets; children need diapers, and women sanitary pads.”

In “Alternative Facts,” Emily Atkin demonstrates how nonpartisan research group, Global Terrorism Database of University of Maryland, lost funding from the State Department after a report regarding a rise in violence on the right drew criticism from conservatives. Atkin claims that though “Republicans have tried to bury reports about right-wing terror before, ...[t]he situation with the GTD is different, and arguably more troubling, because, as president, Trump has often pushed ideas about terrorist violence that directly contravene the available data.”

Joel Simon asks why so many journalists are dying in “Getting Away with Murder.” Simon records, “at least 34 journalists were murdered in 2018, an 83 percent increase over the previous year. The number of journalists in jail is also at record highs—251 by the most recent count.” Though there may not be one explanation for why journalists are being killed and imprisoned, the United States government’s disappointing response to these crimes helps explain why the perpetrators are acting with such impunity.

“Primary Education” describes what Democrats should learn from how Trump won the nomination. Steven Teles acknowledges that Trump identified a section of potential GOP voters who were being overlooked, while his opponents split the same 60 percent of the Republican electorate. While there are more than a dozen candidates that may run for the Democratic nomination in 2020, Teles asserts “there are (at least) four or five of them, all clustered around the same positions; come next summer, they will be fighting for the same voters, and as a result, they could all lose. It’s the same bad math that afflicted Cruz, Kasich, and Rubio four years ago, only now it’s on the other side.”

In “Strange Bedfellows,” Matt Stoller explains why antitrust is the one issue the left and right can agree on. Stoller declares, “Disdain for corporate concentration is one of the rare things in contemporary American politics that transcends ideological divisions,” even bringing the left and center together with similar critiques. Though monopoly is typically thought to be best handled by courts and economists, Stoller argues that Congress could pass laws to prevent concentration in the first place.

John Fabian Witt reviews the new biography John Marshall: The Man Who Made The Supreme Court by Richard Brookhiser, which reflects on why Marshall is often considered the greatest Chief Justice in American history. Witt describes Brookhiser’s short and captivating biography in “The Operative,” stating “Marshall emerge[d] as the institution’s first great partisan operative: a man who managed with extraordinary success to reassemble a judicial branch in American government from the broken pieces of the Federalist Party. Marshall did not build the court by cantilevering it above politics.”

“Power Dynamics” from author Tony Tulathimutte examines Kristen Roupenian’s debut, You Know You Want This, a collection of 12 stories that are tied together by physiological and psychological violence. Tulathimutte states, “Although You Know You Want This may be timely in its occasional adjacency to #MeToo, its real canniness comes from apprehending the psychology not only of power, but of power-hunger as, itself, a form of weakness: how people harbor an impulse toward sadistic narcissism, and how little it takes for them to succumb to it.”

Jillian Steinhauer evaluates the oeuvre, Irrespective, by influential artist Martha Rosler, which spans her influential career as an artist with works in photography, photo-text, video, sculpture and performance. Steinhauer declares in “See for Yourself”, “gathering samples of a seemingly disparate oeuvre, the exhibition shows Rosler returning to and reexamining the same issues: gender roles, economic class, globalization. Crucially, Irrespective demonstrates how Rosler has adopted feminism not simply as a subject, but as an intellectual and artistic framework.

In “Endless Fragmentation” Alan Wolfe investigates Francis Fukuyama’s new book, Identity: The Demand for Dignity and the Politics of Resentment, which discusses the value of liberal democracy. Wolfe asserts, “Fukuyama’s new pessimism is far deeper than his discarded optimism. The left-right dichotomy that formerly polarized liberal democracy dealt with the question of the proper size of government; compromise, at least in theory, was always possible.”

With “Resistance Training,” Micah L. Sifry studies how L.A. Kaufman’s new book How to Read a Protest: The Art of Organizing and Resistance observes the effectiveness of the modern protest. “Ranging from the 1963 March on Washington to the mass actions of more recent years, [Kaufman’s] new book contends that how we protest—the forms of social organization embodied in these mass events—may be more important than a protest’s immediate outcomes,” explains Sifry.

Rachel Syme examines the final season of the FX comedy series You’re The Worst and how it bucks the usual finale tropes. In “Behaving Badly” Syme states “what I will tell you is that this show, which for years took every possible stab it could at the callow selfishness of its characters, ends up embracing them with empathy and understanding.”

Poems by Marcus Wicker and Garous Abdolmalekian are featured this month. For Res Publica, Editor-in-Chief Win McCormack examines how those with private interests will always prey on public resources in “A Commons Problem”.

The entire January/February 2019 issue of The New Republic is available on newsstands and via digital subscription now.