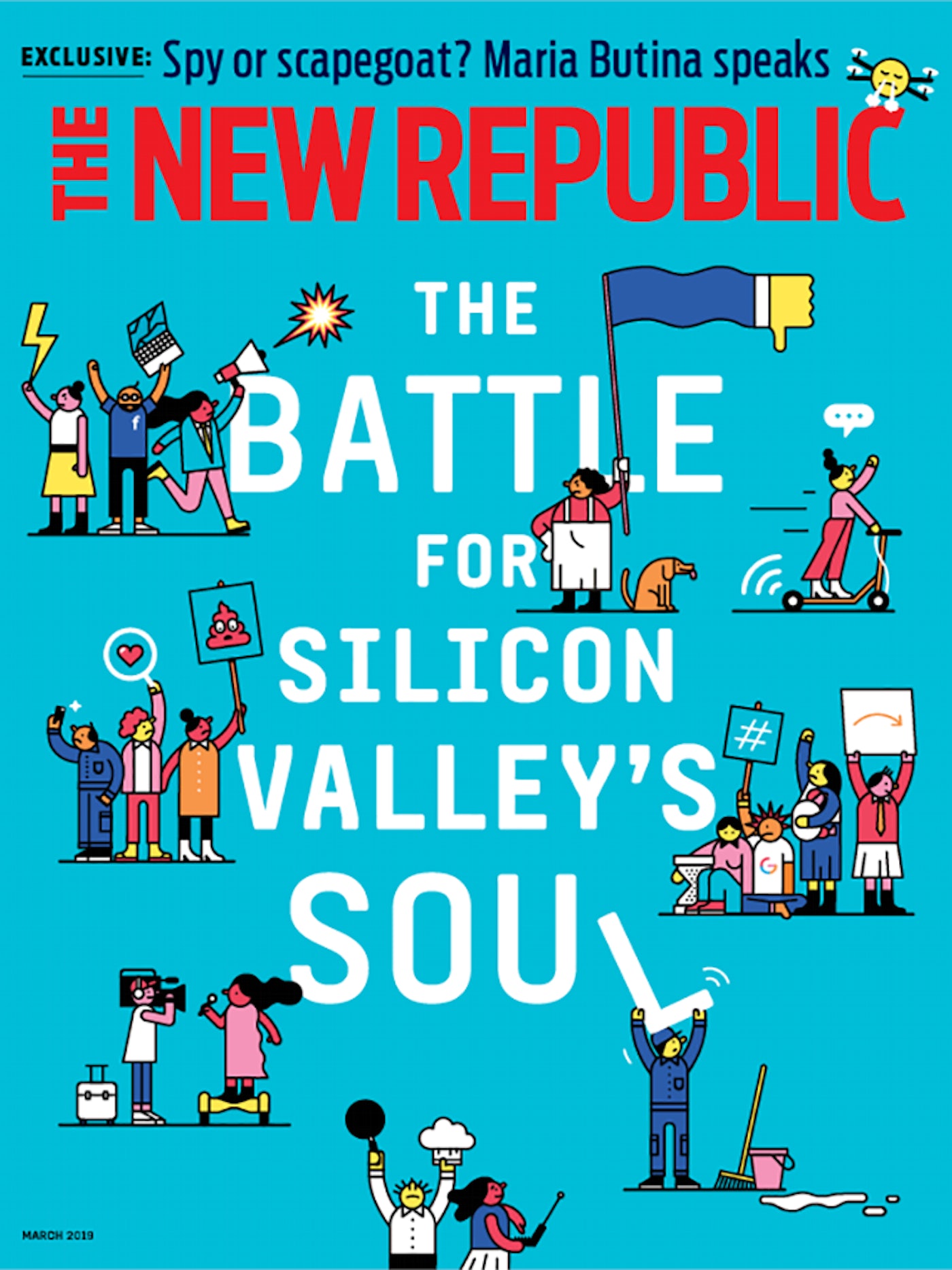 New York, NY—(February 14, 2019)—The New Republic today published its March 2019 issue, with a cover package titled “The Battle for Silicon Valley’s Soul.” The five articles, respectively by Ben Tarnoff and Moira Weigel, Kate Losse, Alex Press, Laura Adler, and Sam Adler-Bell, examine the wave of organizing and activism that has galvanized workers in the tech industry over the past year. Whether speaking out against tech’s intimacy with the military or demanding the implementation of new human resource policies to address sexual harassment, employees demonstrating a principled commitment to holding their CEOs accountable.

In “Next Gen,” Ben Tarnoff and Moira Weigel question whether Silicon Valley is growing away from its liberal and libertarian origins. The new generation of employees at companies like Google and Amazon have strayed from the “Californian Ideology” of their bosses. Instead, as Tarnoff and Weigel explain, “they are embracing a more collective, worker-driven politics—one that owes less to Ayn Rand than it does to Eugene Debs.”

“What’s in an Aim?” discusses how tech workers are using corporate mission statements to hold their CEOs accountable. Kate Losse points out that many tech executives have learned over the past year “that a mission statement only commands loyalty when employees believe it is being consistently upheld; that when they see that it isn’t, they will use it as reason to foment dissent, to strike, to leave.”

In “An Unholy Alliance,”  Alex Press reviews the ongoing relationship between tech firms and the military, which dates back to the earliest days of computers. “It is hard not to feel that tech’s complicity with the military is too deep to be undone,” Press acknowledges—“the ties too strong to be broken.” However, as employees hold meetings, call protests, and form internal networks, they are building momentum to challenge the long-running intimacy between tech and the Defense Department.

Laura Adler describes how Google’s HR department reckons with #MeToo in “After the Walkout.” After more than a fifth of Google’s global workforce exited their offices (20,000 people in all), to protest how the company handled Andy Rubin’s sexual harassment case, corporations like Google have attempted to appease their employees by implementing old-fashioned human resource policies, which stem from the bureaucratic tool kit tech companies once rejected. However, Alder argues, “Policies like the ones Google is putting in place may be ineffective at best, and at worst may entrench gender inequality.”

In “Choreographing the Whirlwind,” Sam Adler-Bell examines how twelve young activists forced a bold idea into the mainstream of the Democratic Party. Adler-Bell studied the strategy of grassroots climate organization, Sunrise Movement, and found that the leaders were able to garner such widespread support once they shifted the focus of their organization away from structure and, instead, towards the moment of the “whirlwind.” This term, which was coined by the organizer Nick von Hoffman, “evokes something essential and visceral about what it feels like to be involved in a wave of political upheaval. The whirlwind disorients, defies gravity, upends things and leaves them in a new place.”

Additional information about the March issue is included below.

In “Passive Resistance,” Mychal Denzel Smith analyzes the Resistance, the ubiquitous term for all manner of anti-Trump activity and emotion, and questions whether it is really a movement at all, or simply a form of branding for the most benign type of opposition. As Smith explains, “While there has been opposition to the most odious parts of [Trump’s] political agenda, what has truly animated the Resistance is disdain for Trump’s character.” If the Resistance is to show itself as a true movement, one worthy of the name it carries and more meaningful to the people who are participating, Smith argues, “it needs to find a definition and purpose beyond Trump.”

Over the course of a number of exclusive interviews with Maria Butina, before and after her arrest, as well as with Paul Erickson and George O’Neill, James Bamford explores the case against Butina—and why that case may be crumbling before our eyes. In “The Spy Who Wasn’t,” Bamford, who made waves with his exclusive 2014 interview with Edward Snowden, chronicles the story of how the young Russian gun rights enthusiast may have fallen victim to prosecutorial overreach on a grand scale. “Without evidence of espionage, money laundering, passing cash to the Trump campaign, violating Russian sanctions, or any other crime,” Bamford reports, prosecutors have fallen back on “rarely used” McCarthy-era espionage legislation to prosecute Butina.

In “The Crime of Parenting While Poor,” Kathryn Joyce acknowledges that the Administration for Children’s Services (ACS), New York City’s child welfare agency, has a reputation for unjustly targeting low-income families of color, and wonders whether it has any chance of changing. While ACS has executed new initiatives through pilot programs that could have a far-reaching impact on how child welfare is protected, Joyce claims that in order for government policies to change, society must undergo a transformation in how it thinks about the problem: it must give up the “Social Darwinist conviction that the wealthy are most deserving because they are wealthy, and the only reason poor people are poor is because of some personal flaw.”

In “Off the Map”, Patrick Iber details how the United States reinvented empire. Iber critiques Daniel Immerwahr’s How to Hide an Empire: A History of the Greater United States, a book that will arrive as perhaps the most hotly anticipated release in American diplomatic history in some time, in part because of an unusual professional dispute between the author and historian Paul Kramer. Iber believes the book “succeeds in its core goal: to recast American history as a history of the ‘Greater United States.’”

Brian Goldstone discusses how Édouard Louis confronts the French elite’s contempt for the poor in “The Dispossessed.” A commentary on the French writer’s new book, Who Killed My Father, Goldstone’s piece examines the shame that pervades Louis’ work. “Now he wants to collect this shame and direct it at its proper targets: those responsible for decades of callous and crushing policy,” says Goldstone. He goes on to note, “It quickly becomes clear, however, that the new book has a force and immediacy all its own. Who Killed My Father tells the story—part lament, part searing polemic—of a tough guy reduced to something like a state of living death.”

“Meat Tech,” by Rachel Riederer, looks at a plan to eliminate animal farming that relies on science and startups in Jacy Reese’s The End of Animal Farming. Riederer notes, “In the literature of meat-eating ethics, Reese has carved out his own niche: the business-friendly techno-utopian optimist.” She continues, “Reese’s idea—that people will give up something pleasurable and familiar without the spark of something deeply felt, be it shame or compassion—relies on a very generous view of the human animal.”

Which political order would give us the most control over our lives? That’s the question Jedediah Britton-Purdy poses in “Free Time,” a review of Martin Hägglund’s book This Life: Secular Faith and Spiritual Freedom. “Hägglund, who teaches literature at Yale, aims to give fresh philosophical and political vitality to a longstanding question,” Britton-Purdy observes. “He argues that to live well requires two things: We need to face our choices with clarity, and we need the power to make choices that matter.”

Lidija Haas examines Asghar Farhadi’s brilliant orchestration of social dynamics in “Things Fall Apart,” a commentary on the Iranian director’s latest film, Everybody Knows (Todos lo saben). In what is only Farhadi’s second project based outside of Iran, Haas notes that Everybody Knows (starring Penélope Cruz,  Carla Campra, Ricardo Darín, Javier Bardem and Bárbara Lennie), takes its drama from the delicate dance of what characters perceive, or don’t, at different moments.

The entire March 2019 issue of The New Republic is available on newsstands and via digital subscription now.