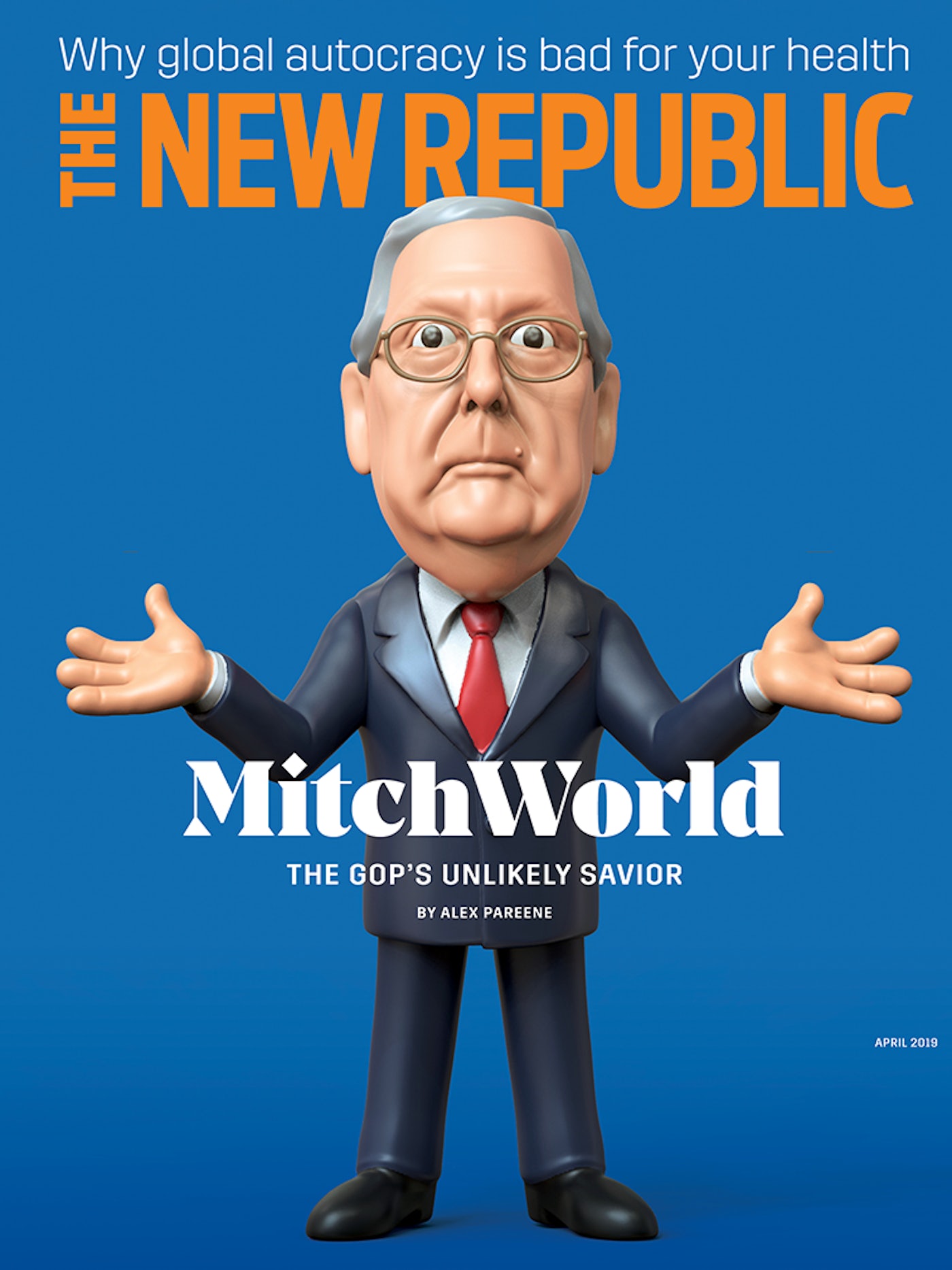 New York, NY—(March 21, 2019)—The New Republic today published its April 2019 issue with a cover story that details the banal, evil, all-destructive reign of Mitch McConnell. In “Nihilist in Chief”, Alex Pareene classifies McConnell as “a man serenely unbothered by anything he’s done to get his power or anything he’s done with it, having few friends but many allies.” Pareene, like many others before, seeks to unearth what makes McConnell tick.

“Once you realize McConnell has already achieved his life’s dream, and ascended to the limits of his ambition, his behavior suddenly starts to make more sense. He’s not trying to cap off his career with a legislative masterstroke, because he doesn’t care about legislation. He already won. He’s the Senate majority leader, his parliamentary prowess is regularly feted, and he has already  left his legacy indelibly inscribed on the highest court in the land.”

Sarah Posner explores how key congressional Republicans have been sidling up to nativist and authoritarian leaders across the globe, long before President Trump came on the scene in “Right Makes Right,” produced in partnership with Type Investigations. In her piece, she points out that “for years, Republican members of Congress, lobbyists, and political consultants have worked to forge bonds with far-right leaders across Europe...you might call this loose federation of fellow travelers for the nativist global right the strongman caucus.” She warns that this group of leaders, now somewhat validated by Trump’s election and continued similar alliances, will pose a challenge to future administrations who will try to stem “the ominous global advance of right-wing strongmen.”

In “The Plague Years,” Maryn McKenna details how the rise of right-wing nationalism is jeopardizing the world’s health. McKenna notes that the worldwide effort to eliminate diseases such as measles or polio is not failing because vaccines are faulty, but rather because a “rise in nationalist politics, which is causing countries to turn inward, harden their borders, and distrust outsiders” is in turn causing these diseases to multiply across the globe. Nativism discourages cross-border cooperation and threatens public health systems, making the risk for a catastrophic breakout of disease even greater. “This is the perverse legacy of nationalism in power: By stigmatizing immigrants, xenophobia can turn the lie of the ‘dirty foreigner’ into truth,” writes McKenna. But “pathogens pay no respect to politics or to borders. Nationalist rhetoric seeks to persuade us that restricting visas and constructing walls will protect us. They will not. “

Ken Silverstein examines the lasting effects of the 1965 Indonesian massacre in “Blood Money.” In addition to the obvious casualties of a political massacre that claimed the lives of at least 500,000 civilians, Indonesia’s once-vibrant labor movement and other civil-society groups were quashed to the point of no recovery. Silverstein explores the continued reign of political elite – also bolstered by foreign businesses and factories – who benefited from “The Massacre Premium.” In a country where “workers are ransacked of their wages, their job security, their collective bargaining rights, and their freedom to protest their treatment,” the influence of “the historical amnesia that lurks behind Indonesia’s wage-theft regime” has continued to prevent them from organizing to protect themselves and their rights.

To win in America, the left must decide what it means to win abroad. That’s the crux of Greg Grandin’s “The Home Front.” In his piece, Grandin asks the question, “Can progressives put forward an internationalism that isn’t linked to war and corporate power?”. His answer: social democrats “will have to dismantle the engines of expansion themselves. Cut the military budget; euthanize the fossil-fuel industry; fetter finance; close the bases, and bring the troops home.”

Kristen R. Ghodsee’s “Electing for Autocrats”, Ghodsee reveals how U.S.-led regime change breeds future demagogues. Ghodsee states, “The instability that results from recasting a country’s economy has a subtler impact than military intervention, but it can be just as traumatic… .” She concludes, “As Democrats embrace the fight against domestic inequality, we also need a foreign policy that links the promotion of democracy with targeted efforts to prevent drastic disparities in income, even if this means constraining privatization and economic liberalization.”

Benjamin Kunkel in “Can American Foreign Policy Be Greened?” argues for why we need a Marshall Plan to fight climate change. Such a plan would promote, “the greening of capitalist economies over the next dozen years or so, not only to keep global warming within tolerable bounds but to preserve capitalist civilization for its ultimate socialist or communist takeover.”

Stephen Wertheim makes the case against American military supremacy in “How to End Endless War.” Wertheim believes the time is now to question the assumption that the U.S. “maintain global military dominance, regardless of circumstances, forever”. He writes, “The burden of proof now falls on those who favor a large military role, and they must justify not only the purposes they seek but also the perils that outsize power poses when the vicious and the reckless get to swing the sword.”

In “Senior Moment,” Rachel M. Cohen addresses the 18 million baby boomers that will reach retirement age between 2020 and 2030. Cohen writes, “...Within the last few decades, retirement and senior care have become some of the most intimidating and untenable costs people face in their lifetimes, a burden more crushing than paying for college or buying a house.” Retirement will most likely feature prominently in the 2020 race. “Politicians who address retirement understand they can reach not only the elderly, but those who care for them,” says Cohen.

In “Adventures in Modernism,” Jeet Heer dives into the unlikely, energizing friendship of Hugh Kenner and Guy Davenport, by examining the hefty and sturdy two-volume set, Questioning Minds: The Letters of Guy Davenport and Hugh Kenner, edited by Edward M. Burns. Heer notes that the volumes illustrate the intense friendship between the two writers, a consequential union that remade them both. He writes,  “…Questioning Minds is a monument to the strange and wonderful relationship of two oddballs uniting to make an odd couple.”

Christine Smallwood reviews Sally Rooney’s new novel Normal People and explores how she puts into words a generation’s beleaguered idealism as “the first great millennial author.” In “Great Expectations,” Smallwood writes, “many good writers and all great ones have only one story to tell, even if they find different ways of telling it. With Rooney this is especially pronounced.” With a writing style “built for the Instagram age,” Rooney’s novels capture human intimacy in a way most millennials will relate, “usually portrayed as messy and chaotic.”

“The Dean” by Max Holleran examines how the founder of the Bauhaus school, Walter Gropius, made a vital political community out of the ruins of war in a review of Gropius: The Man Who Built the Bauhaus by Fiona MacCarthy. “Gropius’s legacy cannot be judged by his biggest structure but rather by the huge influence he had over a range of artistic mediums. As the Bauhaus turns 100 years old, it stands in contrast to an architecture defined by glass-and-steel towers, emanating little more than an aesthetic of power,” writes Holleran.

Can Frida Kahlo’s things tell us what drove her? In “Fridolatry,” Rachel Syme reviews a captivating new exhibition at the Brooklyn Museum of the artist’s personal items alongside her paintings and drawings. “Kahlo’s obsession with painting her own image wasn’t to cast herself as a hero; it was an exploratory process, an experiment in fusing a life into art. The shelves and shelves of merchandise seem to fulfill a prophecy she never spoke,” writes Syme. “The Brooklyn Museum show tells a different story.”

Geoffrey Wheatcroft’s “Never Sorry” details historian Eric Hobsbawm’s awkward embrace of the Establishment in the authorized biography by Sir Richard J. Evans, Eric Hobsbawm: A Life in History. Wheatcroft notes, “Evans’ book is thoroughly researched, largely based on Hobsbawm’s own copious papers, but diligence is not matched by a sense of proportion or lightness of touch.” He continues, “The book is far too long, more chronicle than biographical work of art, and Evans writes with plodding earnestness, aggravated by the fact that he is in such awe of his subject.”

Poems by Michael Prior and Jana Prikryl are featured this month. For Res Publica, Editor-in-Chief Win McCormack examines whether civic republicanism can help save the planet in “How Green Was My Virtue”.

The entire April 2019 issue of The New Republic is available on newsstands and via digital subscription now.