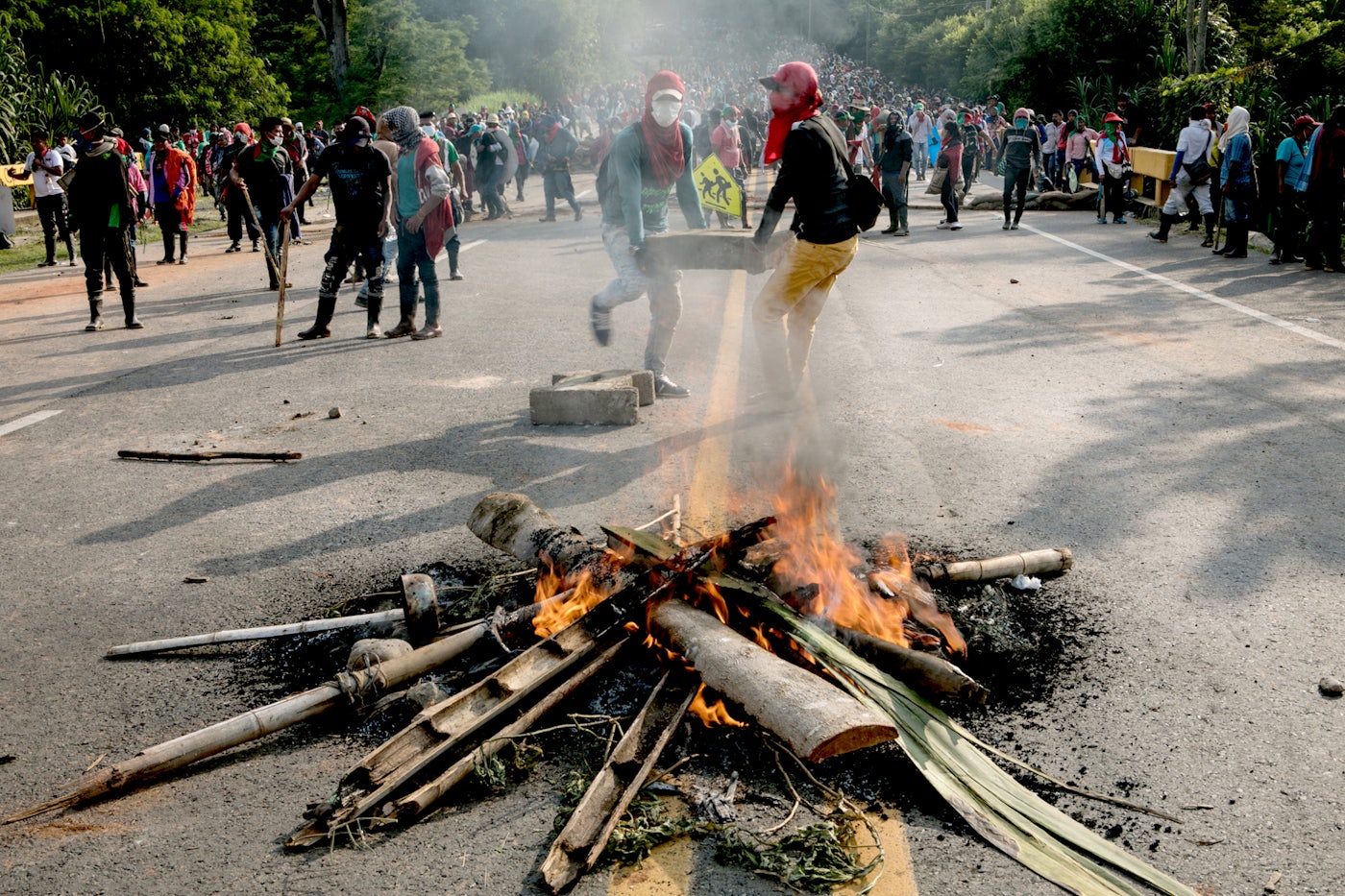 The air is almost opaque from tear gas, lingering like heavy, burning perfume. Every few minutes, a warning shout echoes from up the highway—“Corre!” (“Run!”)—sending a cascade of people fleeing from the distant sound of explosions. “It’s the most beautiful thing, these protests,” a man comments from the protective shade of a tall grave. “You can see everyone fighting for their rights together.” He rearranges the T-shirt covering most of his face. “But it’s also sad. There will be bloodshed and deaths. It’s always a sacrifice.”

The man, who preferred to remain anonymous, belongs to a powerful indigenous movement in Southwestern Colombia that organizes through the Regional Indigenous Council of Cauca, also known as the CRIC. They believe the Colombian government is ignoring systemic violence to indigenous communities—failing to enact peace programs that were designed to end five decades of armed conflict, and violating over a thousand legal agreements that protect minority groups’ land and sovereignty rights. In February, leaders from the Council demanded that President Iván Duque Márquez meet with them to discuss these concerns. But at the president’s refusal, they orchestrated a “minga”—which indigenous leaders consider a spiritual principle of resistance tracing back to colonization.

The “Action for the Defense of Life, Territory, Democracy, and Peace,” as they call the protest, has now lasted over three weeks, with 20,000 people blocking the Pan-American Highway, mostly in the state of Cauca, where the initiative began. Demonstrators are vowing to uphold the blockades until President Duque arrives in Cauca and engages in talks, prepared to sustain the minga for months. The longer he waits, the more people are joining in, closing down new highway passages in other parts of Colombia. The protest now blocks a third of interstate transportation, costing Colombia millions of dollars. State forces are increasingly using military tactics to disband the protest, but the violence is only encouraging more people to participate. Indigenous groups in 11 states are now involved, as are peasant farmers and Afro-descendants, who share bitterness about resurging violence and state neglect.

The National Organization of Colombia issued a call for action in late March that they say 326 popular organizations and 30 congressmen have endorsed. A week before, over 1,200 social  coalitions, human rights representatives, and political delegates expressed their support for the protest in a letter to the president, and four state governors urged Duque to meet with the demonstrators. The government has sent several delegates, including the Ministry of the Interior and Peace Commissioner, to negotiate with leadership about terms to lift the blockade. But the organizers want the president, and want talks at the established assembly site in Cauca rather than a private meeting space so that the community can participate.

Duque, meanwhile, has condemned the minga as a lawless action that harms the whole country. His decision to increase military pressure rather than give in to dialogue affirms what many in the minga already believe. As a leader from the guardia indígena, an unarmed civilian defense force, told me, “All of them—they love war. It’s easier than standing up to the pueblo, the people.”

The president’s steadfast resistance to the talks is not a surprise; it’s consistent with the rule of his political mentor (or, as some critics say, puppet master) former President Álvaro Uribe Vélez, known for his punitive and bellicose approach to security in Colombia. Uribe, who served two terms from 2002 to 2010, adopted an “iron fist” strategy against guerrilla movements, and staunchly opposed peace talks with rebels. In 2016, when his successor Juan Manuel Santos successfully negotiated a peace deal with the country’s largest guerrilla organization, the Revolutionary Armed Forces of Colombia (FARC), Uribe led the opposition against it, and the agreement was narrowly rejected in a public referendum.

“Our companions are being murdered, and where is the government? In Venezuela!”

Now, Duque is obediently following suit. In February, he announced a policy that prevents the government from being able to establish bilateral ceasefires with any armed group, effectively shutting down two years of peace talks with the National Liberation Army (ELN) rebels. He aims to dismantle one of the few remaining pillars of the FARC peace agreement, the Special Jurisdiction for Peace. Largely as result of changes made to the accord and implementation failures, many former FARC members took up arms again.

Many of the protesters belong to sectors of the population most affected by this rising violence. Paramilitarism has accelerated in Colombia after years of relative dormancy, with right-wing armed networks emboldened under Duque’s ascent to power. A paramilitary group known as the Aguilas Negras, or Black Eagles, circulates death threats, targeting the same social leaders who are organizing the protest. In December, they even placed a bounty on the heads of indigenous authorities in Cauca.

The government’s inadequate response—or tacit approval—of these conditions fuels the seething frustrations that have motivated so many to mobilize recently. Their communities have been terrorized by a sharp uptick in murders of social leaders—172 in 2018 alone, 77 of which were during the first three months of Duque’s presidency. The majority of the victims have been community organizers and people working to advance the peace process in areas most ravaged by the armed conflict. In Cauca, where the protest is primarily taking place, this assassination rate is far higher than anywhere else in the country.

When Duque failed to show up to talks on March 11, protesters only saw it as further indication of the president’s indifference to the violence. A leader from the CRIC, José Domingo, spoke before the group with the impassioned authority of a preacher: “They care more about what’s happening outside than in our own country, as if it’s about human rights,” he said, referring to Colombia’s and the United States’s focus on ousting Venezuelan President Nicolás Maduro. “People are dying of hunger, of contaminated water, our companions are being murdered, and where is the government? In Venezuela!”

To many protesters, the Colombian government’s friendliness to U.S. intervention in Venezuela represents a broader, structural opposition to the Left that has targeted political organizers and resistance movements in Colombia for decades. After weeks of police aggression on the highway to suppress their dissent, mingueros—protesters—feel that legacy live on.

Every afternoon, fresh mingueros flow into sprawling encampments near the highway along with new supplies. Women take shifts preparing breakfast at 3 a.m.; people sleep in the spare hours between their highway duties. There’s an improbable joy in the collective struggle. Musicians play in camp, and when police drones fly overhead, gleeful cheers ring out as people defiantly launch firecrackers into the sky. “Are you ready for la fiesta tomorrow?” a leader asks. “La fiesta,” or “party,” is a euphemism for demonstration.

“Always have your bag packed and be ready to run.”

The minga shows no sign of being deterred by violence. On April 2, a protester was killed during a police attack in Cabijo, Cauca, when armed personnel surrounded protesters on the highway, beat people, threw tear gas, and allegedly fired upon them. The incident wasn’t the first such aggression by state forces. On March 19, the riot-control police unit known as ESMAD, fired long-range rifles into the crowd of demonstrators, injuring six people. Just three days before, ESMAD operatives forcibly entered two encampments in Cairo and el Tunél, Cauca, and set fire to the informal settlements, destroying all of the food and injuring 11 people. “You just have to sleep like a rabbit with your eyes open and get used to sound of the helicopters,” one woman told me. Nestled in a tent beside her six-year-old daughter, she warned that police might drop tear gas on the camp at any moment, forcing everyone to flee so that they could burn it down. “Always have your bag packed and be ready to run,” she said.

The messiness of events on the ground is inflaming old tensions from the armed conflict. Some corridors of the highway pass through guerrilla-patrolled areas, which has led to shootouts between rebels and state forces. On March 26, police posts in two parts of Cauca responded to gunfire from the mountains and two vehicle bombs detonated on the highway. The ongoing chaos has made it easy for government and media to vilify the protest, even though attacks are also escalating in other parts of the country. What happened, who was perpetrator, and who was victim, depends upon who you ask and the narratives that serve them—each violent act like a Rorschach test of allegiance.

On the same day that ESMAD operatives fired on the protest, a police officer from the unit was killed in a mysterious explosion on the highway. The president was quick to blame protesters for the incident, arguing that it proved guerrilla involvement in the movement—an accusation that organizers reject. Instead, they say the military is infiltrating their demonstration, planting violent faux-demonstrators in order to justify retaliation. Patrolling members of the guardia indígena announced on March 20 that they had identified three undercover army personnel carrying grenades and military firearms circulating within the camps. The National Indigenous Organization of Colombia (ONIC) suspended all negotiation until the government retract unfounded stories that stigmatize and criminalize the minga. They want the government to de-militarize opposition to the protest, which they regard as an expression of their right to peacefully assemble.

By the end of the first week, indigenous authorities had counted 25 injuries to mingueros at the hands of state forces, six of them critical. The following day, nine young members of the guardia indígena died from an explosion while scouting new encampment sites. Authorities are still investigating who planted the bomb, but the CRIC is calling the incident a massacre. And yet, as rage and grief swells with each new violent episode, so too does the indigenous movement’s implacable commitment to the cause. “Our ancestors have resisted extermination for 500 years,” a leader from Cauca told me. He explained that to be in minga is simply to be in community struggle for a common goal. “If this president thinks we’re just going to leave the highway, he doesn’t realize how long we’ve kept up this fight.”

Hanna Wallis is a filmmaker and journalist focused on indigenous issues. She is currently directing a documentary about indigenous resistance in Cauca, Colombia.