For decades, the city used strict zoning laws to target the poor and people of color. Today, liberal NIMBYs are fighting to preserve them. 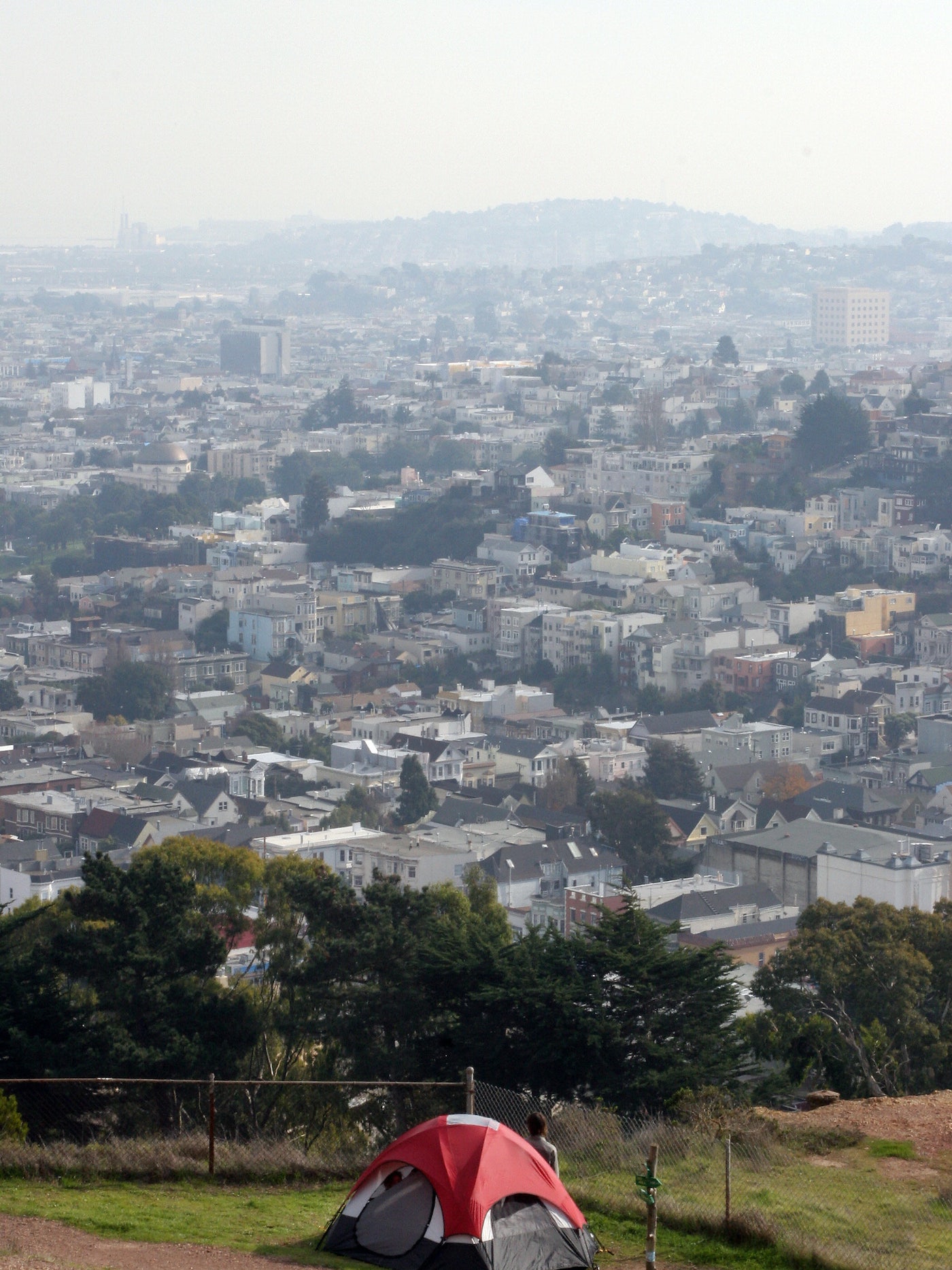 In 1920, as a teenager, my grandfather immigrated to San Francisco from Greece with nothing to his name. He and his two brothers worked restaurant and grocery jobs before starting a store of their own, The Owl Market. They got married, started families, and bought an eight-unit apartment building in Nob Hill. My grandmother didn’t work; she cared for the children and finished her education. Later, the brothers sold the apartment building, and my grandfather bought a five-bedroom home on the cusp of Golden Gate Park.

Today, the idea of moving to San Francisco penniless, and of then being able to buy sizable properties and raise three children on a single salary—as a grocer, nonetheless—is laughable. The median price of a single-family home is $1.6 million, which requires an annual household income above $320,000, while the median monthly rent for a one-bedroom apartment is $3,700. In the metro area, 81 percent of all homes cost at least $1 million.

Many blame the tech industry for creating tens of thousands of new jobs in the area each year without doing much to relieve the housing crisis. Walk down Market Street during rush hour and the wealth disparity is apparent: Techies buzzing inside offices designed like Apple Stores, looking out onto streets dotted with trash, human feces, and the city’s 7,500 homeless people. It’s enough to startle even the most hardened city dweller—and has lately become fodder for journalists.

“In a time of scarce consensus, everyone agrees that something has rotted in San Francisco,” Karen Heller wrote in a Washington Post essay last week titled “How San Francisco Broke America’s Heart.” She was clear about the source of that rot, describing a “wealth earthquake” that had turned downtown into “a theme park of seismic start-ups” where “streets are choked with Google and Apple employee buses, and 45,000 daily Uber and Lyft drivers, some commuting from hours away and unfamiliar with the city.”

In one way, Heller is right about the state of affairs in San Francisco today. The tech industry has birthed a new generation of uber-wealth in the city—one billionaire for every 11,600 people, according to Vox. But, ultimately, neither tech workers nor greedy landlords and developers are to blame for the housing crisis. The villain is much more amorphous.

As someone raised across the Bay in the sprawling city of Oakland, I always thought of San Francisco as a major city. One day over lunch in the Dogpatch neighborhood, a friend from Seoul and another from Moscow laughed at that notion. “San Francisco is practically a town,” one told me, as they each described the high-rise buildings and hyper-efficient living quarters in their home cities.

For all of the much-derided mega-developments—like the Millennium Tower, a 58-story luxury apartment building which tilts because it was too heavy for the landfill it was built on, or the Salesforce Tower, a phallic abomination piercing the otherwise quaint San Francisco skyline—most neighborhoods, particularly the more affluent, restrict anything aside from single-family homes. As The New York Times’ Farhad Manjoo noted, many residents and politicians in the famously liberal city have resisted proposals to loosen zoning rules, thereby increasing housing density and affordability.

“What Republicans want to do with I.C.E. and border walls, wealthy progressive Democrats are doing with zoning and Nimbyism,” he wrote. “Preserving ‘local character,’ maintaining ‘local control,’ keeping housing scarce and inaccessible—the goals of both sides are really the same: to keep people out.”

While a touch hyperbolic, it’s certainly an apt description of the origin of San Francisco’s housing restrictions, which were every bit as racially motivated as President Trump’s immigration policies today. Decades before my grandfather came to San Francisco to live out his version of the American Dream, zoning laws targeted the poor and people of color, setting the stage for the crisis today.

Anti-Chinese groups in San Francisco first pushed housing restrictions in the 1880s with the Cubic Air Ordinance, which required 500 cubic feet of space for any one person in a room of lodging. Though it was a city-wide limit, the bill was created with Chinese immigrants in mind—impoverished workers often packed into rooms, sleeping in multi-tiered bunkbeds—and they were the targets of hundreds of arrests. As a centennial report from San Francisco’s Planning Commission put it, “the ordinance was created by populist, nativist politicians who consistently scapegoated the City’s already disenfranchised Chinese laborers in the name of concerns for white working class laborers.” The ordinance also set a dangerous precedent for housing restrictions to come.

In the wake of the 1906 earthquake, which destroyed 28,000 buildings, regulators took the opportunity to rethink the city’s layout. They spent years creating and appointing a planning commission, and the first zoning code passed in 1921. It separated industrial areas from homes, keeping noxious commercial work on the waterfront and away from residential neighborhoods. Yet, as Amit Ghosh, former director of the San Francisco Planning Department, told Collectors Weekly, “the underlying use of zoning to segregate people and income levels is undeniable. It was part of the original intent.” Wealthy neighborhoods were kept hyper-exclusive by limiting the housing density allowed there and, though such provisions were later removed from the plans, there were attempts at blatant segregation, such as designating sections of the Fillmore District as residential to block more Japanese businesses from opening there.

Where the city couldn’t legally segregate, landowners did so themselves.

Where the city couldn’t legally segregate, landowners did so themselves. Many inserted ownership requirements into building deeds, known as “racially restrictive covenants,” to selectively filter potential buyers. (Though no longer enforceable, even today some Bay Area homebuyers have been shocked to find such requirements still in their property’s title report.) Regulators turned a blind eye. This particularly hurt black families, who also faced the nearly impossible obstacle of obtaining loans, as most financial institutions refused to lend to them. (Even in 1957, the Giants’ baseball legend Willie Mays had trouble buying a home near the affluent St. Francis Wood area, no thanks to racist neighbors.) Poor neighborhoods and areas dominated by non-white residents were also redlined, meaning that developers and banks avoided investing in those areas or loaning to those who lived there.

In 1945, a new Master Plan was envisioned to improve public transit, parks, and major roadways. City officials also targeted the Western Addition, SOMA, Mission, Chinatown, and Bayview-Hunter’s Point neighborhoods—home to many working-class and non-white families—as areas of “blight” that required widespread demolition. That word—blight—“was a deeply political term firmly rooted in structural racism, which relied on fears of white flight and urban disinvestment to justify the wholesale removal of communities of color,” states the Planning Commission’s centennial report. The city bought these homeowners out at bargain rates, and booted stubborn ones under eminent domain. In the Western Addition alone, a predominantly black section of the Fillmore District (which saw a major influx of African-American residents post-WWII), 883 businesses and 4,729 households were forced out. Many had nowhere to go, even as sections of their neighborhoods remained empty for years. (This loss is the foundation of the upcoming film The Last Black Man in San Francisco.)

Wealthy neighborhoods were comfortably zoned only for single-family homes. With their communities safely preserved, affluent homeowners took up the anti-development charge, lobbying against attempts to create new freeways and high-rise apartment buildings. As one former city planning commissioner told the The Blade in 1971, “High-rises are like heroin. Once you start you can’t stop except by drastic means and by then it’s too late.” The Residential Rezoning of 1978 was this contingency’s crowning achievement, enforcing 40-foot height limits for most of the city’s residential neighborhoods, limiting the number of housing units in buildings and imposing specific design regulations. As Hunter Oatman-Stanford noted in Collectors Weekly, a planning department report “estimated that the zoning changes would eliminate around 180,000 legally buildable units from the city, or about a one-third drop in the city’s potential for growth.” While many spoke up about the devastating impact this would have on low-income and middle-class residents, the rezoning ultimately passed.

Since then, housing development has primarily been concentrated in those select parts of San Francisco zoned for multi-family units, displacing many longtime residents who never could afford to live in one of the city’s single-family neighborhoods. The Mission District, historically home to a vibrant Chicano/Latino and middle-class community, has been transformed by widespread gentrification, as younger residents—who likewise can’t afford a single-family home, but can afford to live somewhere in the city—have moved in. The neighborhood is now known for its expensive boutiques, party culture, commuter buses, and, of course, skyrocketing rents.

Thanks to Heller and Manjoo’s articles, “hypocritical” liberal San Franciscans were flagellated on the internet all last week. But NIMBYism is a widespread affliction. Democrat or Republican, few want to see their neighborhoods change. Resistance even transcends class. Generally speaking, the wealthy want to maintain the charm of their neighborhood and keep property values high, while lower-income individuals hope to sustain some semblance of community and culture—and to avoid eviction by greedy landlords.

The problem exists throughout California. It’s illegal to build anything but single-family dwellings in 80 percent of neighborhoods in the state, which is rather limiting considering that, by some measures, California needs 3.5 million more homes by 2025 to meet demand. Around the Bay Area, from the liberal pockets of Berkeley and Marin County to the more conservative parts of Contra Costa County, zoning chokes housing expansion.

Building denser housing is the only solution to this crisis.

San Francisco residents have feared Manhattanization since the ’60s. That degree of development never will, and never should, come to the city. But building denser housing is the only solution to this crisis. According to one study, San Francisco won’t have enough housing for people with very low incomes until 2030, and not enough for people with moderate income until 2045. (This effect has rippled throughout the Bay Area: That same research indicates that Oakland won’t have enough moderate-income housing for almost 500 years.)

To that end, some state politicians are looking for ways to override local officials and (mostly affluent) residents who are resistant to further development. Though SB-50, a controversial state bill to loosen zoning largely around transportation, schools, and employment centers, was tabled until next year, a different bill proposed by State Senator Nancy Skinner just cleared the California Senate this week and is headed to the Assembly. SB-330, also known as the Housing Crisis Act of 2019, would prevent cities from blocking housing developments for low or moderate-income households. Even if it’s successful, anything built as a result of this act would take years to plan and complete, and even longer to make a meaningful dent in the housing market. (It’s also unclear if developers will fund mid-range complexes. Will they see these projects as financially feasible?)

I often talk to my father, a first-generation San Franciscan, about the things he’s seen change in the city. The demolition of his favorite jazz and comedy clubs, restaurants, and neighborhood hangouts. The seemingly endless construction in the business districts. The traffic that piles up at practically any hour of the day. Yet when the two of us look out over the San Francisco skyline from Oakland, something still softens in him—the hideous jut of the Salesforce Tower notwithstanding. San Francisco hasn’t broken our hearts, not yet. But if the city is going to survive this wealth earthquake, that skyline must rise—not obscenely, but perceptibly—in neighborhoods across the city. My grandfather came here empty-handed, and the city gave him what he needed to make a life for us. San Francisco has to make room for those with similar dreams today.

Lexi Pandell is a writer from Oakland, California. Her work has been published by The Atlantic, The New York Times, WIRED, Condé Nast Traveler, GQ, and others.