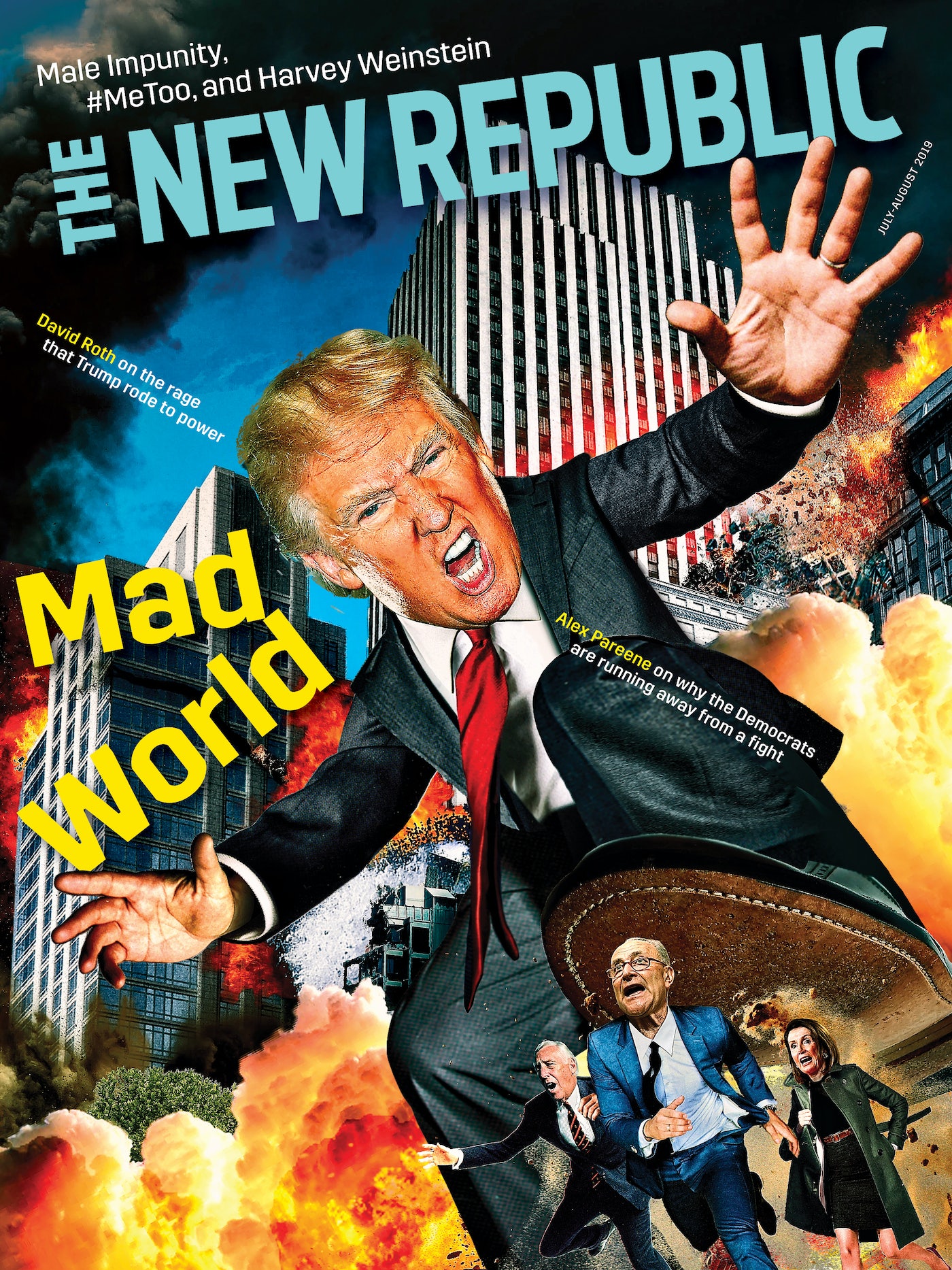 New York, NY—(June 20, 2019)—The New Republic’s July/August 2019 cover feature creates a dramatic contrast between the approaches of a fractious President Trump and a cowed DNC. In two provocative pieces, Alex Pareene and David Roth analyze this collision of political perspectives, delving deeply into the root causes of this great chasm.

With “The Man Who Was Upset,” Roth makes sense of the extraordinary petulance characterizing Donald Trump’s reign. Exploring the president’s life as a businessman and politician, Roth identifies one root quality that defines the man’s existence: his ability to get (very easily) upset. “It’s what binds his deliriously incoherent politics, and helps him thread together his wildly far-flung grievances,” Roth writes. “Trump never forgets a slight, and pursues ancient grudges against bygone New York showbiz figures with the same tireless vigor that he brings to his campaigns against his various Deep State persecutors—into a single rancid system of being.”

In thoughtful contrast, Pareene’s “Give War a Chance” investigates the Democratic Party’s long-running aversion to outright attacks on its opponents. Where is their fighting spirit? Democrats seem to be “pandering to their supporters while secretly hoping their nonsupporters won’t get offended,” Pareene reflects. “The future of the Democratic party, and by extension the country, may well depend on whether the party is finally willing to ditch its fretful posture of peacemaking and give war a chance.”

Walter Shapiro exposes the polling industry in “Down for the Count.” He describes a flawed system in crisis, noting that the “polls are about as accurate as a blunderbuss, and most pollsters know it.”

In “An Economy in Waiting,” John Case argues that 2020 Democrats should embrace employee ownership as a compelling solution to inequality. “It’s hard to see what an electorate deeply attuned to the injustices of status-quo ownership arrangements would find to fault in a vision of capitalism for people,” Case writes. Employee ownership plans capture “the benefits of free enterprise without so many of the drawbacks.”

Melissa Gira Grant underlines Trump’s talent for capitalizing on the work others have done in “White Mom’s Burden.” Gira Grant describes Cindy McCain’s crusade against human trafficking, which employs “tales of tough cops and big business saving good girls from bad immigrants,” as offering useful narratives for Trump, and criticizes the entirety of the political set who have seized trafficking “as a way to extend their brands to humanitarian intervention.”

The New Republic’s television critic, Rachel Syme, reviews the long-awaited Deadwood: The Movie, in “Outlaws in Charge.” Syme calls the TV series the movie is based on “one of the best stories ever put on television.” And although it is set in another century, it “feels suddenly, deeply resonant,” with today’s global and political climate.

The entire July-August 2019 issue of The New Republic is available on newsstands and via digital subscription now.