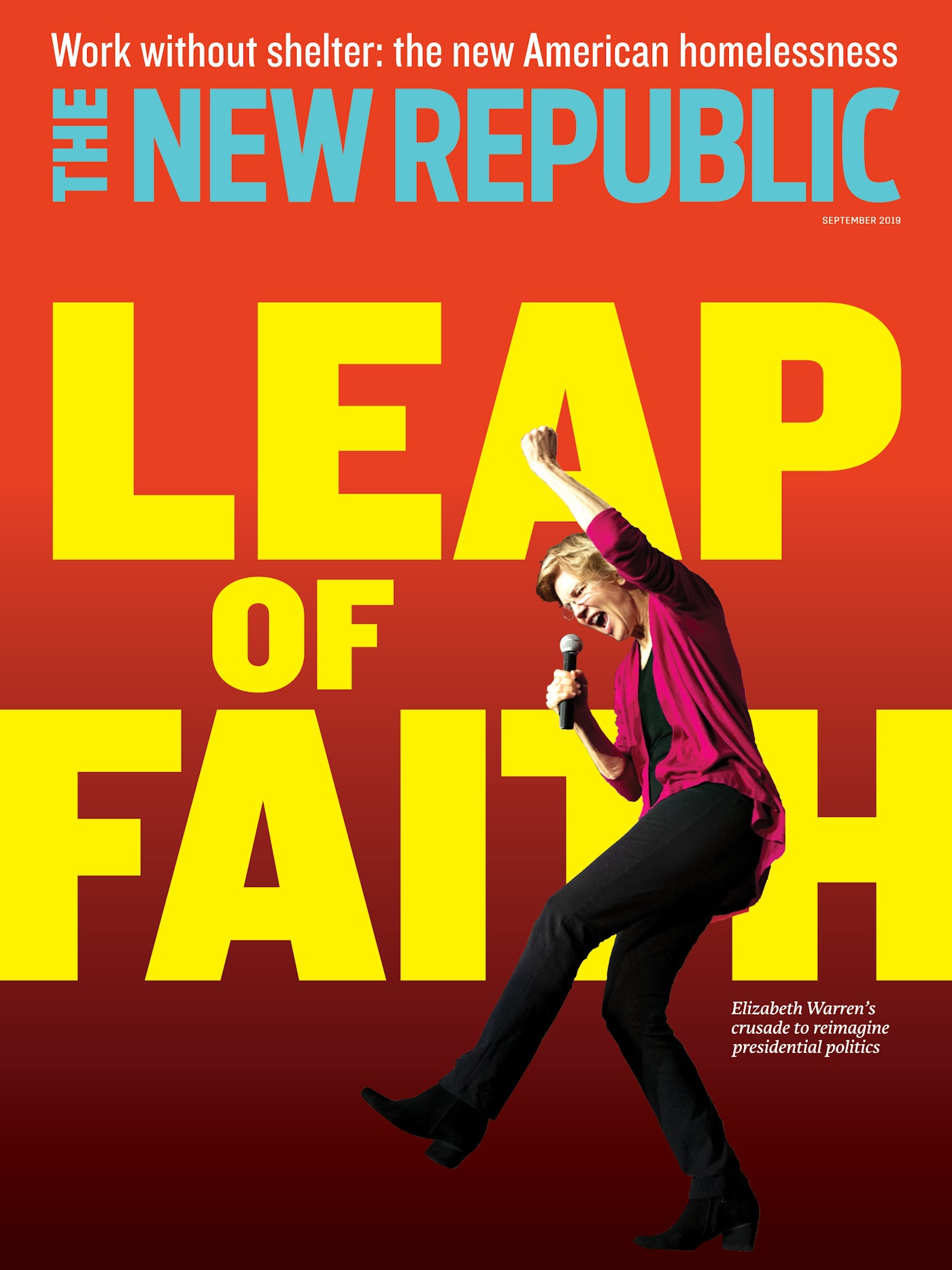 New York, NY—(August 15, 2019)—The New Republic’s September 2019 cover feature, “Arguing the World,” examines Elizabeth Warren’s presidential campaign, from its initial rocky fundraising to its data-heavy policy proposals. Veteran political reporter Walter Shapiro considers Warren’s bid through the lens of his many years of experience covering the horse race: “The pace of her paper chase and the level of policy detail and supporting material are unprecedented since I began covering presidential politics in 1980.” He explains Warren’s mass appeal as a result of her intelligence, passion, and “wonkiness.” “By the flexible standards of politics,” he argues, “Warren is about as authentic as you are likely to get.”

In “One for All,” Astra Taylor and Leah Hunt-Hendrix seek to identify what can be done to avert global catastrophe. The answer? Solidarity. The authors claim that “unlike identity, solidarity is not something you have, it is something you do—a set of actions taken toward a common goal.” In order to achieve “a more ecologically sustainable and economically just world,” we must abandon our individualistic mindsets and come to terms with humanity’s shared future.

“Shock Corridor,” by Ken Silverstein, is the first inside report from a U.S. Immigration and Customs Enforcement (ICE) mental health facility. As ICE implements policies that are all but certain to cause lifelong trauma in detained children, it is also for all intents and purposes testing out methods of treating adult detainees diagnosed with mental illness. Silverstein’s direct interviews with detainees expose the flaws in this program. “‘Their system is not for humans,” one detainee tells him. “It’s for dogs.’”

In “Goon Squad,” staff writer Alex Pareene reflects on two of the summer’s most hotly discussed Trump moments—Trump’s “send her back” rally and his comments in Baltimore—and considers how they are indicative of a larger truth the media can’t seem to admit. “Much of the press and the political establishment sees Trump’s racism as something he injected into a fundamentally good system,” Pareene writes, “rather than some existent force he merely tapped into—either because they prefer to see it this way, or because they are morally or financially invested in believing in America’s essential innocence.”

Kimberlé Williams Crenshaw explores the “politics of white amnesia” through its poster boy, Joe Biden, in “It Ain’t So, Joe.” Crenshaw refrains from blaming Biden entirely for of past and current injustices: “Biden’s selective—and at times flatly deceptive—invocation of his history of course mirrors the countless ways in which American political culture at large relies on robustly denying the truth about our own collective past.”

Editor in Chief Win McCormack’s Res Publica column, “The Green New Deal: A Capitalist Plot (Part 2),” looks back at Alexander Hamilton’s strategy to expand the American economy, and the enduring success that has transcended centuries.

The entire September 2019 issue of The New Republic is available on newsstands and via digital subscription now.