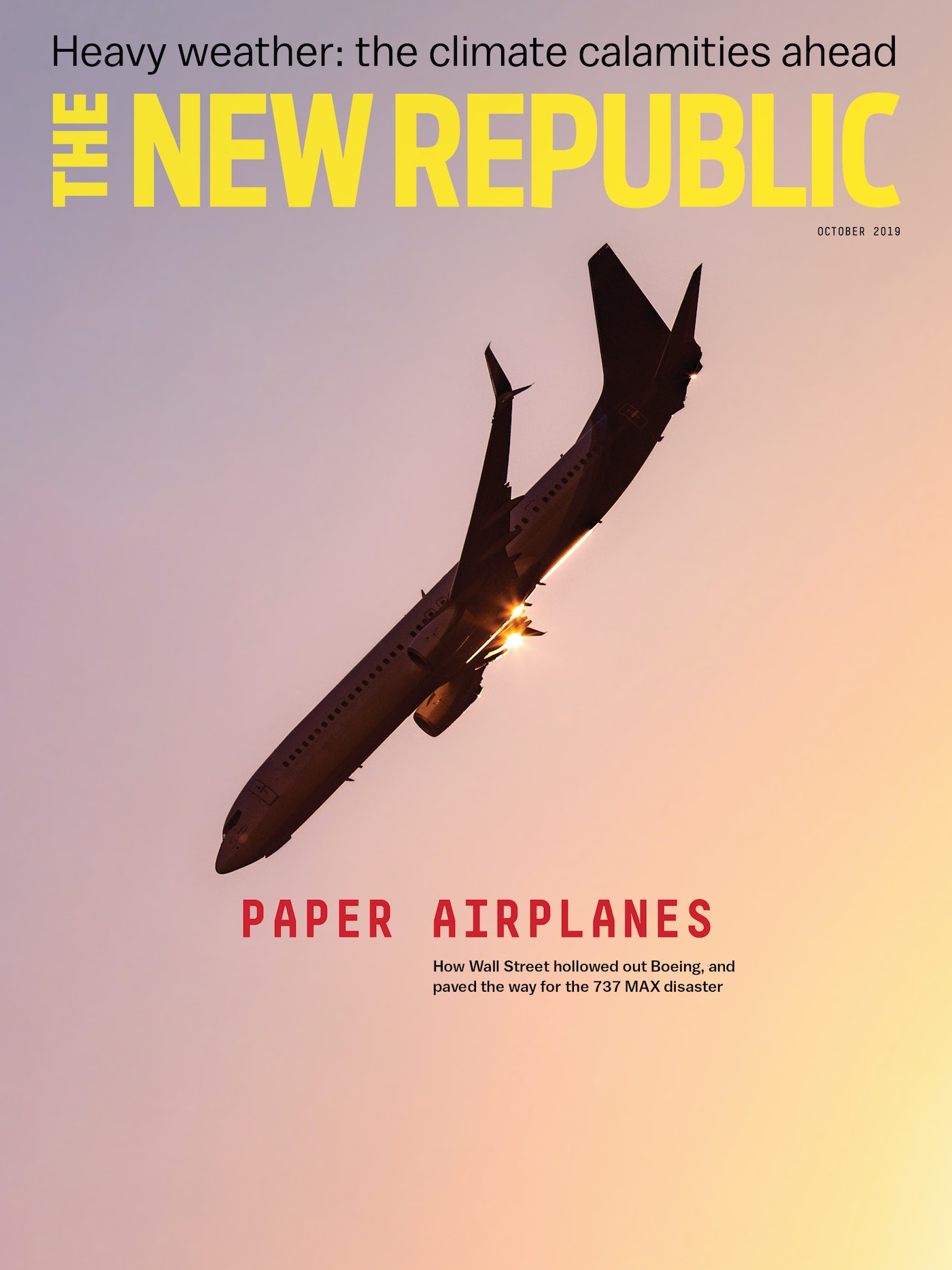 New York, NY—(September 19, 2019)—The New Republic’s October 2019 cover story examines how financial incentives paved the way for the 737 MAX disaster. In “Crash Course,” Maureen Tkacik explains that despite known problems with the MAX—essentially a self-hijacking plane—the company chose not to ground them, in large part to avoid monetary loss. “Airplane manufacturing is no different from mortgage lending or insulin distribution or make-believe blood analyzing software—another cash cow for the one percent, bound inexorably for the slaughterhouse,” Tkacik writes. “You can say that a fatal design flaw killed all these people, but that’s actually just another way of saying that money did.”

Also in this issue, The New Republic joins more than 220 news outlets from across the world in Columbia Journalism Review’s CCN initiative. In a commitment to heightened coverage around one of the most important issues facing the world today, the magazine features a trio of pieces examining the climate crisis, written by Emily Atkin, Mario Alejandro Ariza, Kate Stein, and Sam Adler-Bell.

Atkin’s “The Blood-Dimmed Tide” sets a dystopian stage, imagining a not-too-distant future for society and exploring how the climate crisis might affect geopolitics. In all likelihood, the crisis will act “as an accelerant of global conflict, plunging nationalist powers into a regressive rivalry to seize scarce resources and deny access to putative outsiders of all descriptions.” To prevent this coming to pass, Atkin writes: “The voices demanding change have to be louder—not in the pages of books or magazines, but on the streets and at the polls.”

Ariza and Stein examine the downplayed threat of climate-induced flooding in “Calm Before the Storm.” With nuclear reactors built close to shorelines now threatened by climate change, the proper precautions and increased defenses are being stalled by “a flawed understanding of climate science and the outsize influence that the U.S. nuclear industry exerts on the [U.S. Nuclear Regulatory Commission]”—even as “protections might prove inadequate today should they face the perfectly wrong set of circumstances.”

In “Volked Up,” Adler-Bell explains why fascists are particularly worried about climate change. Some are embracing the Unabomber’s nihilist primitivism while others have adopted Norse aesthetics—but regardless, their yearning for purity in the environmental sphere is rooted in a deep “desire for racialized purity in the social sphere.”

“Edward Snowden’s Bildungsroman” looks into why the NSA whistle-blower asked a prolific novelist to tell his story. Adam Weinstein notes that though this new memoir is “far from the first major project to showcase Snowden’s life and work,’’ it stands apart: It “isn’t just an internet-age manifesto or a screed about government overreach. It’s a bildungsroman crafted with the expert aid of a novelist.”

In Rachel Syme’s “Money Trouble,” HBO’s Succession is examined as “a study in the corrosive nature of extreme wealth.” The show’s central family “[has] everything anyone could want, but they are all empty and lonesome, neglectful and neglected,” Syme writes. But “the point of the show is not to garner sympathy for the affluent. What it does is highlight the complete absurdity of wealth, the moral vacuum it creates.”

The entire October 2019 issue of The New Republic is available on newsstands and via digital subscription now.