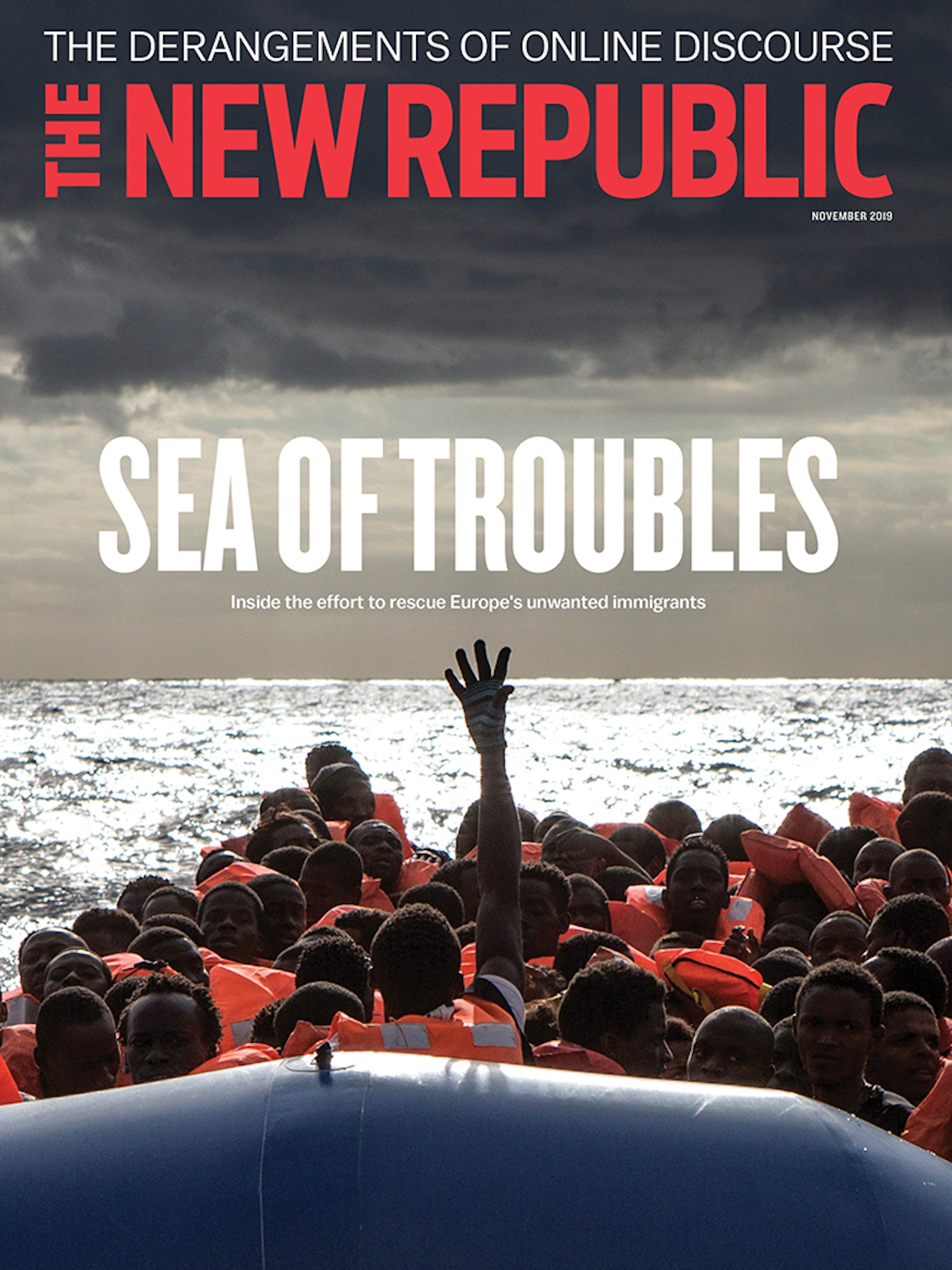 New York, NY—(October 18, 2019)—The New Republic’s November 2019 cover story, “Treading Water,” features writer Ben Ehrenreich’s harrowing journey as a crewmember on the Alan Kurdi, one of the few civilian- and NGO-run rescue ships searching for immigrants stranded in the Mediterranean Sea. As European nations try to stem the influx of immigrants, Ehrenreich writes of the “true shame in...thousands of refugees from war and famine risking their lives on the high seas, and the malign neglect of regional leaders...that consigned their fate into the hands of makeshift and underfunded civilian rescue ships.” The work of the civilian and NGO crew sends a challenge for those demanding change: “not only to witness but to act.”

Also in this issue, Nathaniel Friedman examines the bizarre evolution of Trump-era online communication. “The Discourse is not picky,” Friedman observes in “Moments Without Truth.” “As long as there’s something there to glom on to—almost any sociocultural raw material will do—the takes will begin to fly immediately. Instead of letting things sink in, listening closely, or waiting for a full picture to develop, we weigh in reflexively.”

In “Why Do They Hate Us?” Liza Featherstone critiques mainstream feminists’ obsession with misogyny, calling for more ambitious goals than eliminating what amounts to a feeling.  We should take a page from the second wave, she advises, and put our energies toward changing structural conditions. “When we lead more comfortable, secure lives, we face less danger from the horror in the hearts and minds of our fellow humans.”

In addition to continued climate change coverage, other highlights from the issue include:

“Betsy Blowback,” by Jennifer C. Berkshire, looks at the “subtle but significant fracturing in the coalition that helped hand Michigan to Trump.” Pro-Trump sentiment in this part of the country is waning, spurred by Michiganders’ pride in their good public schools and their dislike for Trump’s appointment of Betsy DeVos as Secretary of Education.

A profile of Representative Katie Porter—“Show and Tell,” by Kim Kelly—examines the under-the-radar Californian’s “even-keel approach,” “incisive analytical mind,” and the “boundless well of patience” that allows her to school conservatives on Capitol Hill.

In “Everyday Trauma in the New American School,” Kate Wagner points out just how deeply gun violence has permeated our society by exploring school architecture, which has begun to include features designed to impede a gunman. That we are now designing schools to prevent school shootings “is an architectural statement that we, as a country, have accepted carnage as a new normal.” It suggests that we see gun violence not as a problem to be solved but rather merely mitigated: “We’re building lasting monuments to Congress’s failure to act.”

“Into the Gloss,” by  Kyle Chayka, looks at the development of modern lifestyle magazine through the life of its creator, Condé Nast, who founded the company of the same name. Nast’s stroke of genius was to market magazines at a particular class of wealthy and aspirationally wealthy people—and consciously exclude everyone else. The model was so successful that, even as the publication industry moves undeniably online, “the highest and most Condé-esque goal of glossy media is likely to survive: creating a club that you want to be part of.”

The entire November 2019 issue of The New Republic is available on newsstands and via digital subscription now.