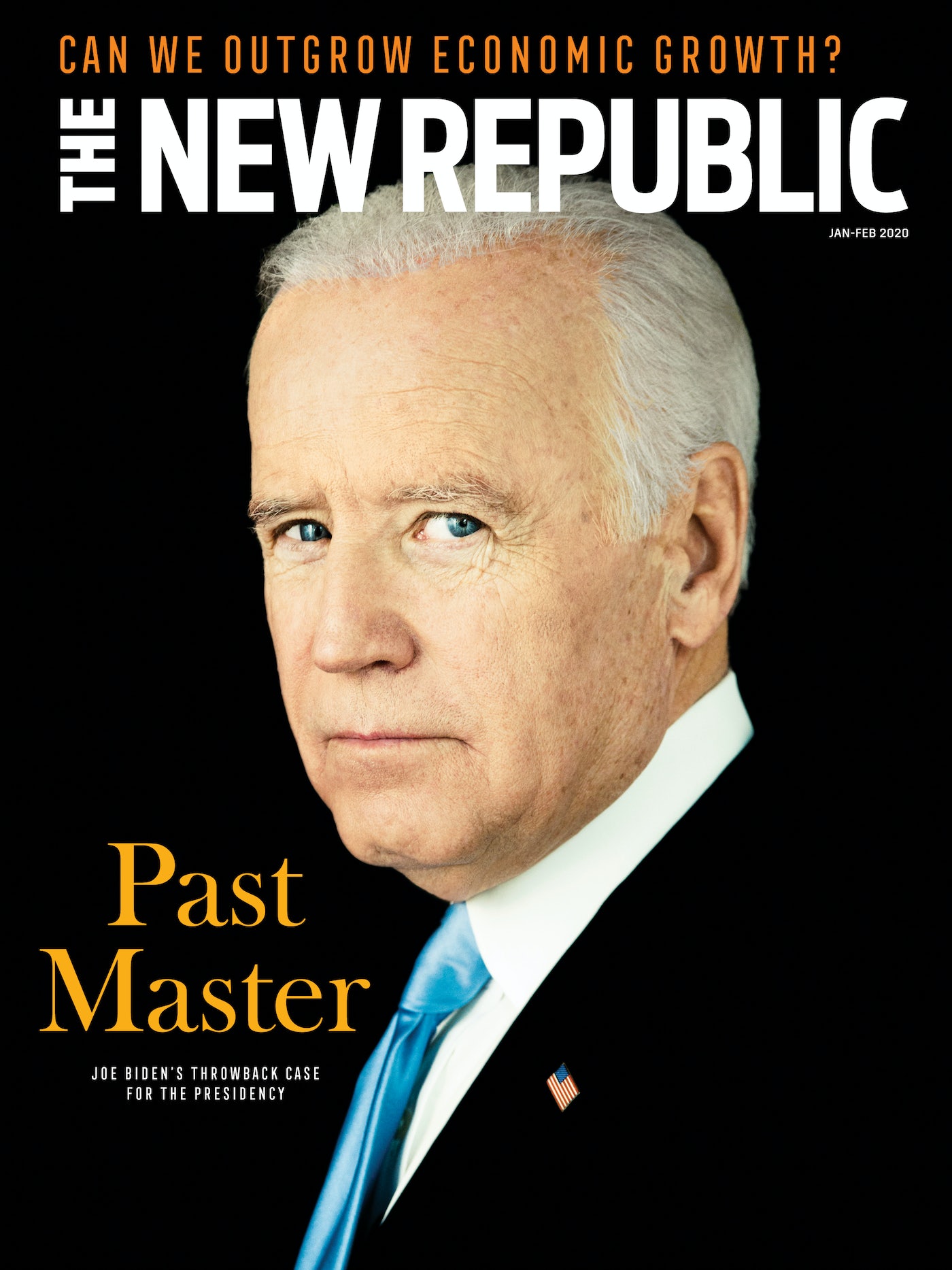 New York, NY — (January 6, 2020) — In The New Republic’s January/February 2020 cover story “A Man in Full,” veteran political reporter Walter Shapiro uses his decades of insight to reflect on the fortunes of Democratic presidential candidate Joe Biden. With a political history to defend that’s longer than any other candidates, and a lifetime of almost unrivaled hardships, according to Shapiro, “Biden is truly the candidate who persists.”

Shapiro has the experience of 11 presidential elections behind him. One benefit of a Biden presidency, he concludes, is that it would give this divided country a much-needed breather. Maybe it’s time for a “long-overdue interval of national healing rather than a season of dramatic transformation...sometimes, more than anything, a democracy needs a chance to exhale.”

Other highlights from the issue include:

Thomas Geoghegan’s “Educated Fools” takes on the elitism of the Democratic party in its failure to understand non-college-educated, working class Americans. The party that used to pride itself on “liv[ing] in the neighborhood” is now made up of the people who buy up property and push others out. As Geoghegan explores “why Democratic leaders still misunderstand the politics of social class,” he presents the question: “We don’t trust them, and would never vote for one of them. Why should they trust or vote for one of us?”

In “Culture War in the Workplace,” Melissa Gira Grant explains how the ‘T’ in the still-evolving ‘LGBTQ’ formulation remains in many ways a legal and political afterthought. She concludes: “In the fight for LGBTQ rights, the law is too blunt and constrained, and so people do the best they can to fit within it to make a case for justice...they were stigmatized then as they are today for their failure to live up to the shifting dictates of whatever ‘real’ manhood or womanhood means in their moment.”

Alex Pareene explores how political fact-checking went off the rails in “The Pinocchio Syndrome.” Pareene notes that “the trouble is, fact-checkers have expanded their purview from checking strictly empirical statements to ‘checking’ contestable political statements.” The consequences of this evolution is that as a result, “Trump’s most glaring whoppers—such as his ludicrous suggestion last April that wind turbines cause cancer—appear no different than Representative Alexandria Ocasio-Cortez’s contention that it’s morally wrong to pay people less than a living wage.”

Jacob Bacharach profiles President Trump’s “apprentice” Matt Gaetz, starring of late in the impeachment hearings. “Trump’s Loyal Apprentice in Congress” traces the journey of Gaetz—who also seems to view provocation as an instrument of power—from his idyllic childhood as the son of a state senator to his own influence in Trump’s government. Ultimately, Gaetz could be the “inheritor of the conservative movement.” As Bacharach explains, “If Donald Trump owes his fame to saying, ‘You’re fired!’ to a crew of fake businesspeople, then Gaetz is perfectly positioned to assume the role of cocksure reality TV contestant: confident in his own inevitable status as a finalist on the biggest soundstage of all.”

In “Glenn Beck, the Nutty Professor,” Jake Bittle writes that as an anti-impeachment conspiracist, Glenn Beck is trying to connect dots in the Ukraine scandal where none exist, offering up a distinct alternative to the mainstream GOP’s response to impeachment. Beck’s “fusty sweater vests and professorial beard are designed to lend him an air of authority,” Bittle writes, “as he paces in front of no fewer than four chalkboards, delivering manic monologues about the DNC, FBI, IMF, and a cast of at least nine Ukranian political figures.”

Rachel Syme reviews the newest season of “The Crown” in “Palace Intrigue,” reflecting on how the appeal of the show comes from its dramatization of stability and detachment. The show chronicles a woman’s 67 years on the throne and how she passed the day during those decades. “Reigns are short, but hours are long,” Syme writes. “‘The Crown’ is most interested in what happens in the space between fanfares.”

The entire January/February 2020 issue of The New Republic is available on newsstands and via digital subscription now.