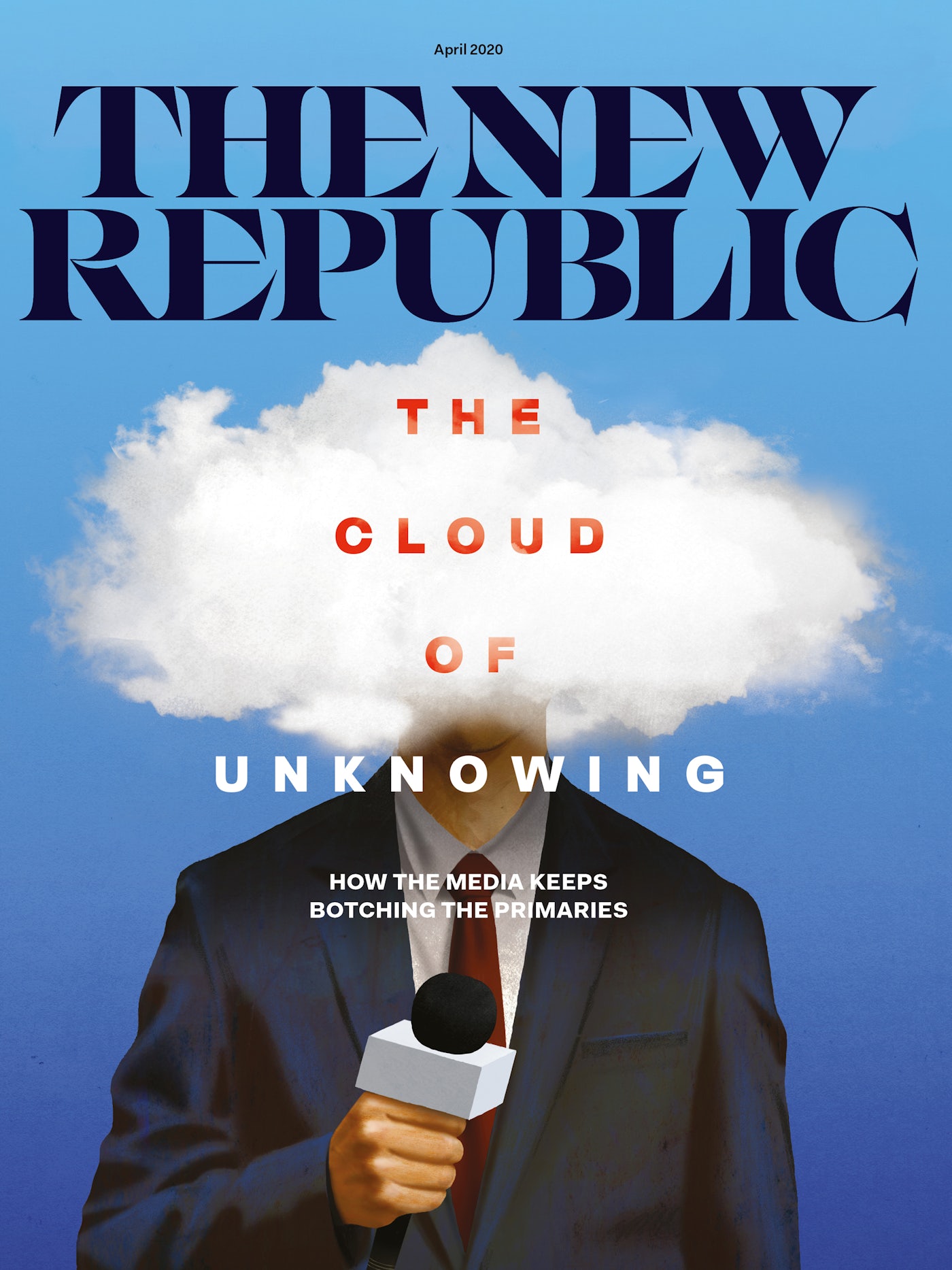 NEW YORK — (March 19, 2020) — In the midst of the ongoing pandemic, The New Republic’s team of journalists is extensively covering the developments of the coronavirus’s spread and its impact on politics and the economy.

For The New Republic’s April 2020 issue, veteran campaign reporter Walter Shapiro lays out how market pressures and professional hubris have undone our political media. In “The Wrong Stuff,” Shapiro writes that “the media has been consistently and unapologetically wrong in chronicling the 2020 Democratic race.” Covering his 11th presidential election, Shapiro warns against a “slavish devotion to polls” and pack journalism—“the simple human reality that no one wants to be wrong”—while recognizing that “horse-race coverage remains inescapable because of the formidable demand for it amongst readers and TV viewers.” But journalists should wield their power more intelligently and responsibly. When the media insists that certain candidates can’t win, fundraising for those candidates dries up. “Just ask Cory Booker, the last serious African American candidate in the race, who yielded to the inevitable in mid-January after months of threatening to drop out if he couldn’t meet his fundraising targets.”

Also in this issue, staff writer Alex Pareene compares politicians “who make big promises, and those who Get Things Done.” In “Headmaster Syndrome,” Pareene challenges readers to look more critically at the latter group. “It is perhaps unwise to make big promises and then fail to deliver on them completely...But moderates who speak out against proposing grand plans should be wary of a tendency in their own politics: They often claim to have delivered on their promises when, in reality, they didn’t.”

In “Seeing No Evil,” Kimberlé Williams Crenshaw dissects the Warren-Sanders “he said/she said” moment, diving into their pre-Iowa dustup about whether Sanders believed a woman could be elected president. Musing on how the 2020 Democratic primary may be a guide for deciphering the limits and rigidity of mainstream gender discourse, she writes: “In a fraught dispute over the electability of a woman presidential hopeful...we got an edifying glimpse of the broader fatalist worldview that has rapidly overtaken the Democratic Party’s discursive mainstream on the crucial question of gender equality.”

Zachary Roth explores how the GOP is poised to create large-scale voting chaos this year in “The Caged Ballot.” Trump has led “an unprecedented and unhinged crusade against alleged election fraud,” and the removal of a 1982 consent decree, which previously protected voters against efforts to prevent or deter them from casting a ballot, has made it clear that the president’s “paranoid obsession with thwarting the workings of democracy can form a critical component of the GOP’s 2020 electoral playbook.”

“Supremely Divided,” by John Fabian Witt, offers an analysis of two upcoming books on the Republican Party’s takeover of the Supreme Court. Reviewing Adam Cohen’s Supreme Inequality: The Supreme Court’s Fifty-Year Battle for a More Unjust America and Ruth Marcus’s Supreme Ambition: Brett Kavanaugh and the Conservative Takeover, Witt writes: “The great question for the coming years is whether a partisan court can survive in its current institutional form...the Supreme Court of the United States is entering uncharted territory.”

In addition, The New Republic has released the third episode of its podcast series,
The Politics of Everything, on the idea of electability and how it can limit politics. Hosts Alex Pareene and Laura Marsh are joined by Seth Ackerman, the executive editor of Jacobin; Matt Karp, a historian at Princeton; and Rebecca Katz, the founder of New Deal Strategies, a progressive consulting firm. The group investigates where the concept of electability comes from, the nature of the historical moments in which it crops up, and the risks we invite by using the term.

The entire April 2020 issue of The New Republic is available on newsstands and via digital subscription now.