Can the European Union Survive a Pandemic?

The coronavirus crisis has turned its member nations against each other. 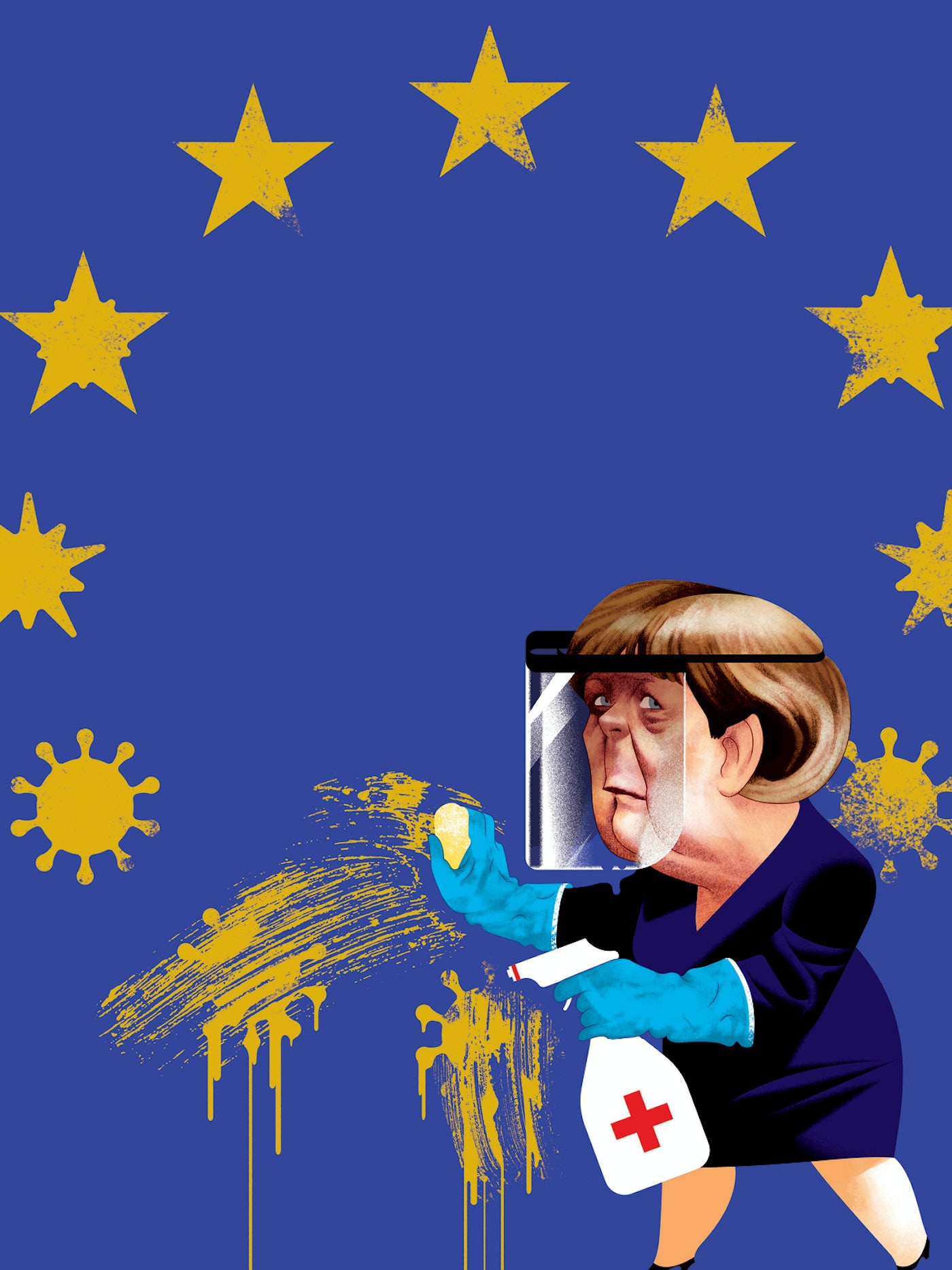 There are two things a quarantined European will reliably find when he goes online for news in this age of the coronavirus: first, the clucking of local pundits at how the Trump administration has managed the epidemic in the United States; second, unmistakable evidence that every one of the major countries of Western Europe, with the exception of Angela Merkel’s Germany, is doing worse.

The coronavirus epidemic has turned Europeans against one another. In early March, Germany, one of the few countries with the manufacturing capacity to equip its citizens with medical masks, canceled plans to export protective gear. This infuriated Italy, which was then at the most desperate stage of its own epidemic. Italy in turn became the scapegoat in a wave of Spanish newspaper stories—about various Iberian fashionistas who had brought Covid-19 back from Milan’s Fashion Week (also canceled, but too tardily); about Venice’s Carnival (halted, but only once it was underway); and about the Valencia fans who fell sick after traveling to Milan for a Champions League soccer match against Atalanta, the team of the heavily infected Italian city of Bergamo.

In Barcelona, Quim Torra, president of the autonomous (and nationalist) government of Catalonia, sought to close off the border between his region and the rest of Spain. He failed. Spain’s politically vulnerable Socialist prime minister, Pedro Sánchez, sniffing a stratagem for Catalan independence, sought—and got—a centralization of emergency authority in Madrid. The Catalans were left to grumble that they were heading into a plague yoked to Europe’s least competent government. That, alas, was an accurate assessment of Spain for much of the spring. By the end of April, its death rate had reached 510 per million. But then the virus took off in divided, decadent Belgium, paralyzed by its own subnational power structures. As April turned to May, deaths there reached a world-beating 633 per million, more than three times the American rate. Meanwhile, almost-forgotten border checkpoints had been reestablished—between France and Germany, Austria and Italy.

Facing their largest challenge since World War II, Europe’s countries are performing poorly. The Brussels-based European Union, the one institution with a track record of coordinating emergency responses continentwide, has been casting about aimlessly for a strategy. Right now, Europe needs regulatory harmonization—which is just what Brussels is good at providing. But Europe also needs leaders who can boost morale and stir up sentiments of shared sacrifice—and these are the specialty of nationalist democracies. Europe’s nations were built on family ties, regional languages, and horrific wars in which everyone shed blood together. The sense of belonging is emotional, intense. Since its consolidation as a political unit after 1992, the EU has sought to transcend and abolish that kind of emotional kinship in favor of a politics of global capitalism and expert planning. Democratically inclined citizens often find this kind of politics frustrating even when global capitalism and expert planning are working splendidly. Right now, they are not.

It would be premature to write off the EU. It is a project of Europe’s political and economic elites, who have learned to protect it with such skill and tenacity that they very nearly overturned the Brexit referendum in Britain. But it is reaching the end of its logic.

All spring long, EU leaders have been meeting by teleconference, hoping to avert what looks like an inevitable finance crisis. Italy is at the heart of the problem. With a fast-shrinking population and a public-sector debt of around 135 percent of its GDP, the country was already on the verge of bankruptcy even before the coronavirus outbreak. Months of enforced idleness have pushed that debt load toward 150 or 160 percent—the level Greece was at nearly a decade ago when its economic difficulties almost destroyed the euro, the EU’s common currency. But Italy’s economy is 10 times as large as Greece’s. So Italy needs a bailout, no doubt about it.

Rome would like the other 26 countries in the EU to share Italy’s debts by issuing “Eurobonds” or—to put it more persuasively—“Coronabonds.” Other countries that are short of cash, like Spain and France, tend to agree. But Germany and the Netherlands do not. They worry, not without reason, that wily Mediterraneans will fleece them of their savings unless they have a say in how the borrowers spend the money. That’s how it worked during the Greek crisis. The money flowed, but EU and International Monetary Fund bureaucrats extinguished Greece’s economic autonomy and, for a while, its democracy. The plan was great for the balance sheets of banks that had overinvested, but it turned Greece itself into a twenty-first–century equivalent of pre-Castro Cuba. Outside of tourism, it is now a more backward economy than it was a generation ago.

Italy will do anything to avoid that fate. Its nonpartisan Premier Giuseppe Conte has managed to qualify Italy for about €36 billion in EU funding, with very few strings attached. That won’t be nearly enough. Now the hard work begins of demanding enough German and Dutch financing to keep Italy in the EU, but not so much as to chase the Germans and the Dutch out.

And that is assuming Italy wants to remain in the EU. Conte has 66 percent approval—a high number in such a distrustful political culture. But the two most dynamic political movements in the country are both hostile to the EU, and they are nipping at his heels. There is the anti-immigration League of Matteo Salvini, who has dominated Italian politics since 2018. It took every trick in the book for Italy’s political establishment to prevent the elections that would have made him prime minister last summer. But Salvini has struggled to maintain his support during this crisis. The League runs hard-hit Lombardy, where the governor has lurched almost daily between pooh-pooh­ing the crisis and sowing panic, in a way that will remind Americans of New York Mayor Bill de Blasio. Salvini has lately been eclipsed by the leader of the Brothers of Italy party, Giorgia Meloni, a sassy and eloquent orator of the Roman right wing, given to diatribes about the “jackals” of Northern Europe who seek to bankrupt Italy in order to “loot its most precious jewels.” In January, 38 percent of Italians still had faith in Brussels; that number has fallen to 25 percent.

We can be certain that the EU’s leaders will come up with ingenious ideas for managing this crisis. They will have a harder time escaping the nationalism-consolidating logic of the coronavirus. For the past three years, French President Emmanuel Macron has been the most pro-EU and pro-market leader in Europe. Right up until the middle of April, he implacably pursued his agenda of Reaganizing France, even in the face of the gilets jaunes (“yellow vests”) protests of 2018 and 2019 and last winter’s nationwide transport strikes. And yet in a half-hour address to the nation on April 15, Macron executed an ideological reversal that made citizens’ heads spin. He called for renationalizing much of the French economy and restoring the country’s “economic sovereignty.”

It is unlikely that Macron has lost faith in the Brussels project of open borders and open markets. But even those who have turned away from hard borders for economic reasons are going to have to make their peace with them for epidemiological ones. There will be country-by-country differences in how fast the coronavirus comes under control. Denmark, which earlier in the epidemic appeared to be on the same hellish trajectory as Spain, sealed its borders and limited deaths to 75 per million, making its response one of the most effective in the West, comparable to that of Germany or the United States, outside New York and New Jersey. By late April, Danes felt safe enough to let their children go back to elementary schools. But that reopening will only be uncontroversial so long as Danes remain unworried about potentially infected foreigners crossing their borders.

You can call these national assertions of economic and political sovereignty expedient or cynical. But they are not unreasonable. Destroying national sovereignty has always been the European Union’s overriding purpose, a purpose as undeviating as it was unavowed. Leaders in Brussels have met every crisis with calls for “more Europe.” In a time of the coronavirus, that remedy is proving inadequate.

Christopher Caldwell is a contributing editor at The Claremont Review of Books.